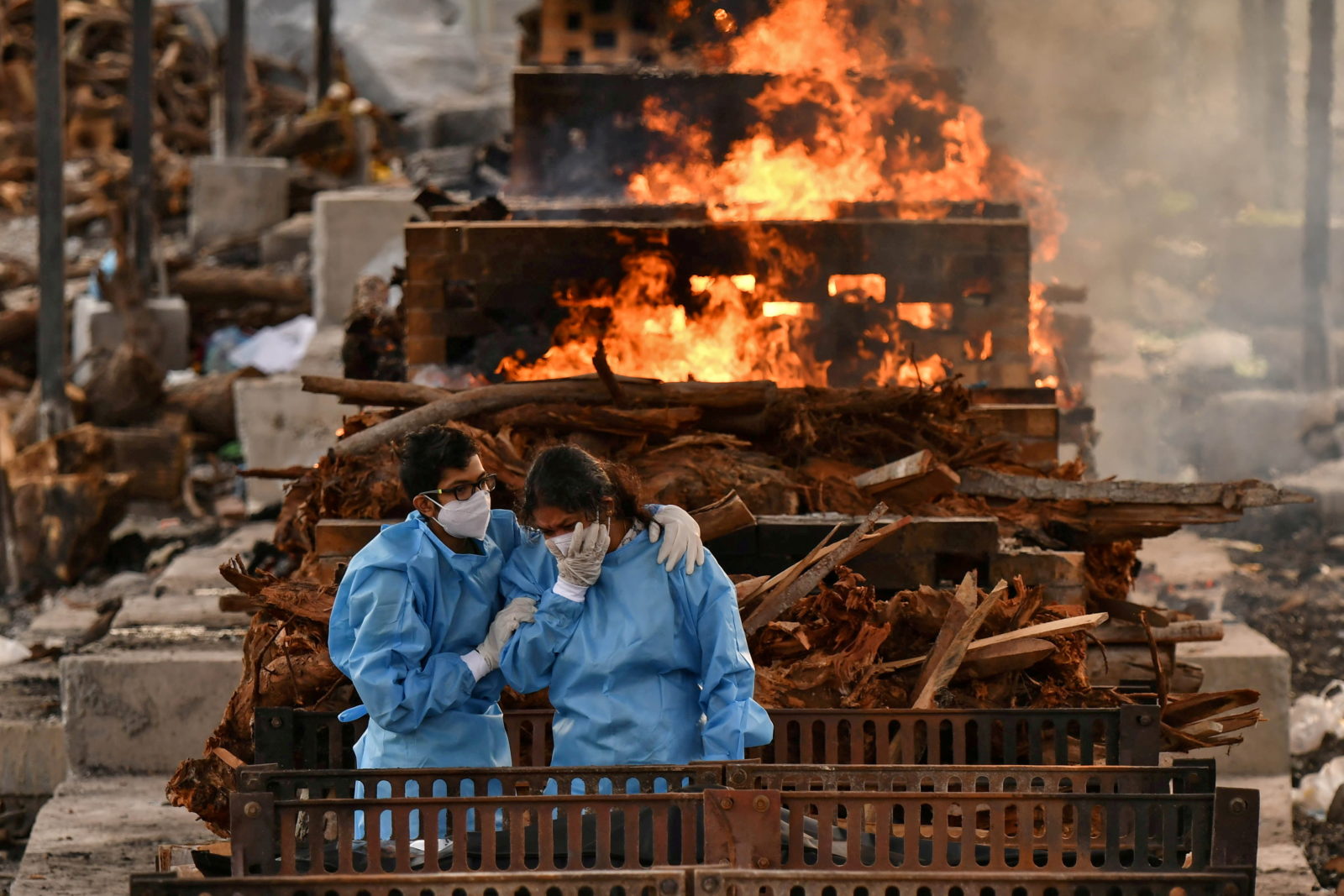 Family members mourn a relative as his body is cremated at a ground near Bengaluru, May 13, 2021. Photo: Reuters/Samuel Rajkumar/File Photo

New Delhi: India reported a further decline in new COVID-19 cases on Monday but daily deaths remained above 4,000. Experts also said the data was unreliable due to a lack of testing in rural areas, where the novel coronavirus is spreading fast.

For months now, nowhere in the world has been hit harder than India by the pandemic, as new strains of the virus took advantage of a stumbling government response and poor public adherence to COVID-appropriate behaviour.

But even with a downturn over the past few days, experts said there was no certainty that infections had peaked, with alarm growing both at home and abroad over the highly contagious B.1.617 variant first found in India.

“There are still many parts of the country which have not yet experienced the peak, they are still going up,” World Health Organisation chief scientist Soumya Swaminathan was quoted as saying by The Hindu.

Swaminathan pointed to the “very high” national positivity rate, at about 20% of tests conducted, as a sign that there could be worse to come.

“Testing is still inadequate in a large number of states. And when you see high test positivity rates, clearly we are not testing enough.

“And so the absolute numbers actually don’t mean anything when they are taken just by themselves; they have to be taken in the context of how much testing is done, and test positivity rate.”

Having begun to decline last week, new infections over the past 24 hours were put at 281,386 by the health ministry on Monday, dropping below 300,000 for the first time since April 21. The daily death count stood at 4,106.

At the current rate, India’s total caseload since the epidemic began a year ago should pass the 25 million mark in the next couple of days. Total deaths were put at 274,390.

Hospitals have had to turn patients away while mortuaries and crematoriums have been unable to cope with bodies piling up.

Photographs and television images of funeral pyres burning in parking lots and corpses washing up on the banks of the Ganges river have fuelled impatience with the government’s handling of the crisis.

It is widely accepted that the official figures grossly underestimate the real impact of the epidemic, with some experts saying actual infections and deaths could be five to 10 times higher.

Whereas the first wave of the epidemic in India, which peaked in September, was concentrated in urban areas, where testing was introduced faster, the second wave that erupted in February is rampaging through rural towns and villages, where about two-thirds of the country’s 1.35 billion people live, and testing in those places is very patchy.

“This drop in confirmed COVID cases in India is an illusion,” S. Vincent Rajkumar, a professor of medicine at the Mayo Clinic in the United States, said on Twitter.

“First, due to limited testing, the total number of cases is a huge underestimate. Second, confirmed cases can only occur where you can confirm: the urban areas. Rural areas are not getting counted.”

A cyclone on course to hit the west coast on Monday is expected to disrupt both testing and vaccination efforts in Gujarat, Prime Minister Narendra Modi’s home state, where infections have risen 30% since May 2. Nearly 150,000 people were moved from their homes in Gujarat to safety as the most intense cyclone in more than two decades roared up the coast.

While lockdowns have helped limit cases in parts of the country hit during an initial surge of infections in February and April, such as Maharashtra and Delhi, rural areas and some states are dealing with fresh surges.

The government issued detailed guidelines on Sunday for monitoring COVID-19 cases, with the health ministry asking villages to look out for people with flu-like illness and get them tested for the coronavirus.

Modi has come under fire for his messaging to the public, a decision to leave key decisions on lockdowns to states, and the slow rollout of an immunisation campaign in the world’s biggest vaccine producer.

India has fully vaccinated just over 40.4 million people, or 2.9% of its population.

On Monday, the health ministry said a government panel had found 26 suspected cases of bleeding and clotting among recipients of the AstraZeneca vaccine, describing the risk as “minuscule” out of 164 million doses administered.

Virologist Shahid Jameel resigned from a forum of scientific advisers set up by the government to detect variants of the novel coronavirus and advise the government on adapting its response.

He declined to say why he had resigned but had mentioned earlier that he was concerned that authorities were not paying enough attention to the evidence as they set policy.