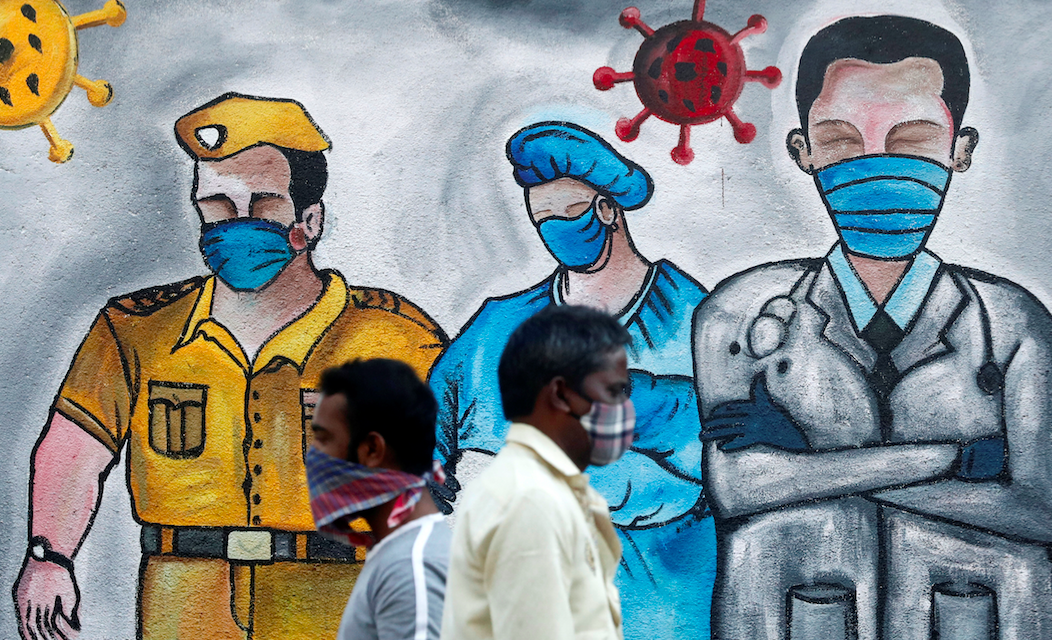 In an interview that both strikes a note of reassurance as well as possibly ring a few alarm bells, India’s top virologist has said of the COVID-19 situation in the country: “I do broadly agree the worst may be over for India.” However, Professor Shahid Jameel has also said that not only is it possible that the new mutant strain discovered in Britain “might already be here in India” but, more importantly, “it could also have independently developed here”. As he explained “the selection pressures responsible for this mutation of the virus may be here in our country as well”.

In a 30-minute interview to The Wire, Jameel, who is the director of the Trivedi School of Biosciences at Ashoka University, said that although broadly speaking the worst could be over, the country “must remain alert to localised spikes and mutant viruses, specially when vaccines are being rolled out”.

Asked by The Wire if his belief that the worst is broadly over means India, unlike Europe and the US, will not see a second spike, Jameel said, “Although the lesson we have learnt is never assume anything about this virus and never think we are different from other countries nonetheless, at the moment, it does look as if India may not see a second spike.”

After saying he was indulging in “loud thinking”, Jameel explained himself more fully. He said, “We may already have 30-40% people infected in India. In urban India this could be as high as 50-60%.” Jameel added that the second sero-survey, which is now two months old, suggests that as many as 150-200 million people are infected. Since the survey came out, that figure could have probably risen considerably. “This,” he said, “is a viable explanation” for the belief that the worst is over and India will not see a second spike.

Asked by The Wire whether the new strain of the virus detected in the United Kingdom in September, the spread of which through the country caused great concern in medical circles in late November and early December, might already have entered India but has not been detected, Jameel said, “Absolutely. I agree it might already be here in India.”

More importantly, Jameel added that the new mutant strain “could also have independently developed here”. He said “the selection pressures responsible for the mutant virus may be here as well”.

Elaborating what he called a hypothesis to explain why he believes it’s possible the mutant strain may have developed independently in India, Jameel pointed to the fairly widespread use of plasma therapy “without prior testing for neutralising antibodies”. He said if plasma from someone who had a weak infection is used the antibodies present might not be strong enough to neutralise the infection in the person the plasma is administered to. In that event the infection may not be completely eliminated but could mutate. That mutation could possibly lead to strains of the virus that are more concerning because they are more infectious.

Asked specifically by The Wire if his hypothesis meant that India’s use of plasma therapy without checking for neutralising antibodies was a case of neglect or negligence, Jameel said, “It was good intention but without sound scientific understanding.” When The Wire said that sounds like a euphemistic or polite way of saying it was neglect, Jameel simply laughed.

However, Jameel said that if a similar mutant strain to the one in Britain has independently developed in India, it’s unlikely to have the same worrying impact it has had in Britain. This is because he believes already 30-40% of the country has been infected by the virus (up to 60% in urban areas) and that level of infection will confer a far greater immunity to Indians. Infection levels in Britain are much lower.

Jameel also said India is not doing anywhere near enough genomic sequencing to look for new and possibly worrying mutations of the virus. With over 10 million cases, there is a greater chance of mutations having occurred in India than in countries where the number of cases is a lot lower.

Talking about the newly mutated virus detected in Britain, Jameel said the belief it could be 70% more infectious is based on modelling rather than laboratory-established scientific evidence. He added, “It’s yet to be proven if the 70% claim is correct.” However, he said “we need to be concerned”, particularly because the new variant is said to have caused 60% of recent infections in the UK.

Speaking about the claim the new strain will not lead to a higher mortality rate, Jameel said whilst this may be the case, it’s also true that if it’s more infectious it will create more cases and that will inevitably lead to an increase in severe disease as well as an increase in deaths. The absolute number of deaths will go up even though there may not be a percentage increase in mortality.

Jameel said whilst we await confirmed results from direct studies to know whether the new strain is more vaccine-resistant than the old one, he added that everything we know about the human immune system suggests it will not be vaccine resistant. He emphasised this is a hope and belief but not as yet a confirmed fact.

Finally, the virologist said to the extent the new virus strain is more infectious, it will also have an impact on herd immunity. The percentage level of infection at which herd immunity kicks in will go up but as yet we cannot say by how much.

Speaking as one of India’s most highly regarded virologists, Jameel gave The Wire a hypothesis to explain how the new viral infection could have emerged in Britain. He said if an immuno-deficient person got infected, the virus could stay with the person for a long time. This would mean the virus could get the opportunity to mutate. Thereafter, if it spread its impact could be significantly different to the pre-mutation version of the virus. It’s possible this is what happened in the UK. This explanation links up with Jameel’s other hypothesis that the use of plasma therapy might, in certain conditions, have led to mutations of the virus that are more difficult to handle.

The full video interview can be found here.