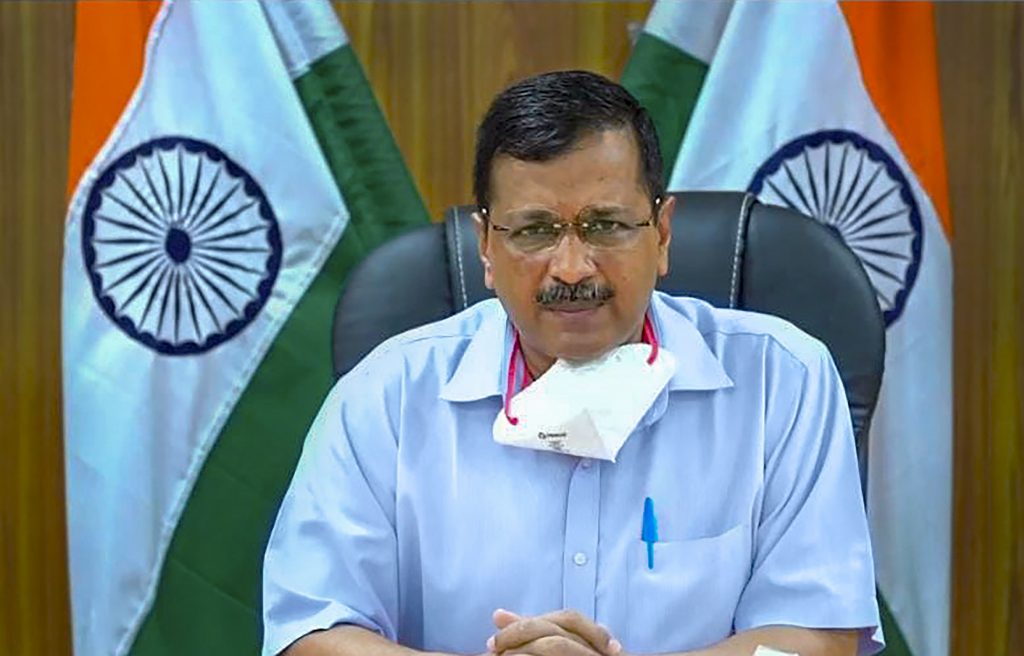 Watch | ‘We Have Tech To Solve Climate Crisis, The Problem Is Of Political Willpower’

Delhi CM Arvind Kejriwal has written to the Centre for help with oxygen and beds in the capital. Photo: PTI

New Delhi: A curfew will be imposed in Delhi from tonight (April 19) until next Monday morning, NDTV reported, as the capital city recorded its highest-ever single day increase in new COVID-19 cases and the positivity rate has reached alarming levels.

“In the last 24 hours, around 23,500 cases were reported. In last 3-4 days, around 25,000 cases have been reported. Positivity rate and infection have increased. If 25,000 patients come every day then the system will crumble, there’s a shortage of beds,” chief minister Arvind Kejriwal said on Monday, while announcing the decision.

“Delhi’s health system has been stretched to its limit, is under stress. Harsh measures will have to be taken to prevent a collapse of the health system,” he continued.

Essential services, food services and medical services will continue, he said. Weddings can be held with a gathering of only 50 people, for which passes will be issued separately.

On Sunday, Delhi recorded the biggest jump in its daily COVID-19 tally with 25,462 fresh cases, while the positivity rate shot up to 29.74% – meaning almost every third sample being tested in the city is turning out to be positive. A curfew had already been imposed in the state over the weekend.

Delivering more bad news in an unprecedented public health crisis sweeping not just Delhi but the entire nation, Kejriwal said less than 100 ICU beds are available in hospitals in the capital.

As the situation turned serious every passing hour, Kejriwal shot off letters to Prime Minister Narendra Modi and Union commerce and industries minister Piyush Goyal urging them to ramp up bed capacity in Central government-run hospitals and to ensure “uninterrupted” supply of medical oxygen.

“The COVID-19 situation has become very serious in Delhi. There is a huge shortage of beds and oxygen. I request that at least 7,000 out of 10,000 beds in central government hospitals in Delhi be reserved for COVID-19 patients and oxygen be immediately provided in Delhi,” he wrote in the letter to PM Modi.

Currently, only 1,800 of 10,000 Central government hospital beds are reserved for COVID-19 patients, he said.

Kejriwal cited that less than 100 ICU beds are available in Delhi now and said he spoke to Union home minister Amit Shah on Sunday morning and stressed the need for beds for COVID-19 patients.

During a press conference, he said the Delhi government in the next two-three days will come up with 6,000 beds with oxygen facility at Yamuna Sports Complex, Radha Soami Satsang Beas premises and schools.

The Delhi government also directed all nursing homes and private hospitals providing COVID-19-related treatment to reserve at least 80% of their ICU and ward bed capacity for coronavirus patients.

According to the order, the occupancy of ICU beds and ward beds for coronavirus patients in 115 private hospitals has reached “almost 100% and 90%” respectively.

Kejriwal said Delhi is facing an “acute shortage” of oxygen for COVID-19 patients and alleged the quota of the city has been “diverted” to other states.

In his letter to Goyal, the Delhi CM urged him to ensure “uninterrupted” supply of 700MT of oxygen on daily basis and restore the supply of 140MT of oxygen by a supplier INOX.

A private hospital in the city closely missed a tragedy in the city Saturday night due to a shortage of oxygen, he said in an online briefing earlier on Sunday.

The Delhi government also approached the police, asking them to lodge FIRs against four airlines – Vistara, Indigo, SpiceJet and Air Asia – for failing to check the RT-PCR test reports of passengers arriving from Maharashtra, officials said.

These complaints have been filed under the Disaster Management Act, they said.

The government has also registered FIRs against two private hospitals in the city for providing “false” information about the availability of beds there on an official app, sources said.

Kejriwal had on Saturday warned hospitals of strict action if they are found giving wrong information or turning away coronavirus patients despite showing the availability of beds on the Delhi government app.

Kejriwal on Sunday visited Yamuna Sports Complex and Commonwealth Games Village where additional beds are being arranged for patients.

Sisodia said that 5,000 oxygen-supported beds are being readied at Radha Soami Satsang Beas. Of these, 500 oxygen beds will become available on Tuesday.

On the second day of the weekend curfew, most of the shops in the city, barring those selling essential items, medicines, vegetables and fruits, remained closed while roads wore a deserted look.

Chandni Chowk traders’ association decided to keep the market closed till next Sunday in view of rising infections.

With the fresh cases, the national capital’s cumulative tally has risen to 8,53,460. The death toll stands at 12,121, according to the latest bulletin.

So far, over 7.66 lakh patients have recovered in Delhi, it added. The number of active cases in the city increased to 74,941 from 69,799 the day before, the bulletin stated.