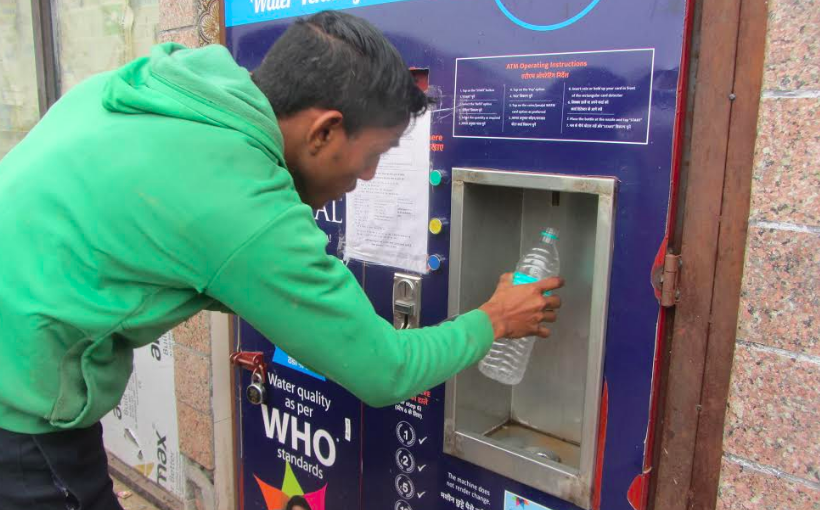 Coronavirus: Why Frequent Hand Washes Are Not Feasible for Millions of Indians

Delhi: Below one of the road bridges on the Yamuna, a water pipeline is punctured. A rubber pipe sticks out from it, spouting water. Children and youth collect this water in plastic cans.

They are not alone. A large population, mostly poor labourers and farm wagers, staying on the Yamuna floodplains do not have access to clean drinking water.

But in central Delhi, people are lucky. At a busy spot on the Aurobindo Marg near its junction with the Ring Road, on one side is the All India Institute of Medical Sciences (AIIMS) and across the road is the Safdarjung Hospital. In front of the Safdarjung Hospital entry gate, on the broad footpath, are a number of vendors selling a variety of stuff. There are two water kiosks or water ATMs, one is run by Swajal and another by JanaJal.

The Swajal kiosk sells 300 ml of mineral water for Re 1. It has been there for almost one and half years now, successfully running  according to locals.

A few metres apart is the JanaJal machine that sells 300 ml reverse osmosis-purified water for Rs 2; 500 ml for Rs 3 and a litre for Rs 5.

At both the ATMs, it is not just hospital patients and their attendants who stand in line, but regular market goers, pedestrians and local shopkeepers or vendors too benefit from these facilities. Although the correspondent visited the kiosks in mid-winter, the demand rises in summer and has been steady even during the lockdown, thanks to the proximity of the hospitals.

Not just at markets or near hospitals, the New Delhi Municipal Council (NDMC) has contractual arrangements with two companies who operate water ATMs in residential areas too.

A similar unit at the Bhai Ram Camp (popular as the B.R. Camp), right next to the prestigious Race Course, witnesses sales of 1 litre. This is an urban slum cluster with 523 houses, all getting quality water supply from NDMC.

The JanaJal water ATM gets raw water supply from NDMC. Issues of water quality are none. Bundu Khan, who works at a horse stable in the race course, said the kiosk is not half as busy in winters. “But in summers, this place is abuzz with activity. Hundreds of people benefit from this on a daily basis, many of them are autorickshaw drivers who know about the kiosk and come to get cool water,” said Khan.

In winters, there are no JanaJal representatives at the kiosk. The company said they deployed him at a marketplace unit which saw more crowds. This led to some difficulties among people who wanted to get water from the kiosk. Ramesh Kumar, the pradhan of the B.R. Camp, said, “Many of our camp residents are illiterate. Hence without staff, it is difficult for them to operate the machine.”

People sometimes insert circular metal items instead of designated coins, or stuff notes that get stuck in the system.

JanaJal’s kiosks populate NDMC areas and some are even in south Delhi. It already has 50 units up and running. The company plans to set up 110 by end of 2020. As part of the Smart City Initiative, all public places are to come up with a comprehensive toilet block. JanaJal has 10-year arrangements with such toilet block developers as well. In summers, apart from treated water, these kiosks also provide cool water.

The company has not just installed such water kiosks but is also running and maintaining them. The company pays power bills at standard commercial rates via sub-metres. “With NDMC, there is no quality issue. We use ultra-filter, not RO. As there is no wastage, the operative efficiency is maximum and hence we can afford it,” Parag Agarwal of JanaJal said.

He also claimed that rejected water from JanaJal kiosks is sent to the neighbouring toilet block.

Leaving out the real needy?

About 15-odd kms away, in a narrow lane of block C, deep inside the Israel Camp settlement of Rangpuri Pahadi in south-east Delhi, residents struggle for drinking water around the year. A common small overhead tank, fed with borewell water, with multiple pipes – 113 in total – jutting out of it, supplies water to as many houses.

Very few houses have independent or direct motors. Kamala Devi, who has been staying in the area for last 23 years, is part of a 25-member committee that manages the water distribution for the block. “We collect Rs 250 per month for one-inch pipe and provide half hour supply per day and Rs 340 for one and half-inch pipe and one hour of supply,” she said.

Nobody drinks water from this pipe though, everyone either buys water or gets it from tanker. But tankers do not reach this remote location, they are parked more than one km away, near the entry to the Israel Camp. “We need either the Jal Board tanker to reach us so that it is easier to carry drinking water home, or we can do with a direct connection,” Geeta Tiwari, another resident of the area, said.

Rangpuri Pahadi is not the only cluster that faces the Jal Board’s perfidy. Deoli, a densely populated colony in south Delhi has routinely seen serious law and order problems over lack of water. Prakash Jarwal, the area MLA (from the Aam Aadmi Party), said there was some talk about water ATMs in 2016-17 but nothing happened then.

Shahbad Mohammadpur is an urbanised village, near the IGI Airport boundary wall. Even in 2020, the village neither has piped water nor does it have any sewage network. “We get tankers and almost everyone has a sump-arrangement [a below-ground tank with a submersible pump] in front of their house. There are stand posts for drinking water but those who can afford, prefer to buy water from outside,” Paras Tyagi, co-founder of Centre for Youth, Culture, Law and Environment (Cycle), an organisation that works for villages such as this one.

In fact, as this July 2019 media report based on Delhi Jal Board data pointed out, piped water may well remain a pipe dream for around 650 JJ clusters and 100 unauthorised colonies. Residents of several clusters and more than 800 colonies are still dependent on DJB and private tankers or illegal borewells for water.”

Out of the total Delhi population of 1.64 crore, as per 2011 Census, 18 lakh people live in slums with varying degrees of amenities available. It is not that the government is not aware of the problem. In fact, remedial measures had been ordered by the earlier dispensation itself. Unable to cater to interiors of the densely populated, narrow lanes of the unregulated colonies, the Delhi Jal Board has been toying with the idea of water ATMs for many years now. The first experiment was at Sawda Ghevra in south-west Delhi which would witness long lines for tanker water.

The concept was launched in 2012 on a ‘no revenue sharing’ model, by roping in a private player. The site was provided by DJB, and the company used borewells and tube wells to draw water. They treated it using RO process before dispensing it at the water ATMs at Rs 0.10 paise per litre. It started with 15 ATMs but only nine of them are functioning as of now.

“There were lot of operational issues. The main thing was availability of land. For a vendor to earn profit out of this venture, the land needed to be at a prime location. At few of the ATMs, the locals either vandalised the setup or the solar panels were stolen. Even the RO plant was set on fire at one place.”

After Sawda Ghevra, the DJB started a similar experiment at Raj Nagar in west Delhi, where 55 ATMs run on borewell and 10 on tanker-supplied water.

Nivedita Khandekar is an independent journalist based in Delhi. She writes on environmental and developmental issues. She can be reached at nivedita_him@rediffmail.com or on Twitter, at @nivedita_Him.

This report was possible due to the WaterAid India’s Media Fellowship ‘WASH Matters 2019’ on the theme, ‘Urban Water’. This is part two of the series of three reports, work for which was carried out from December 2019 until the lockdown in March 2020.