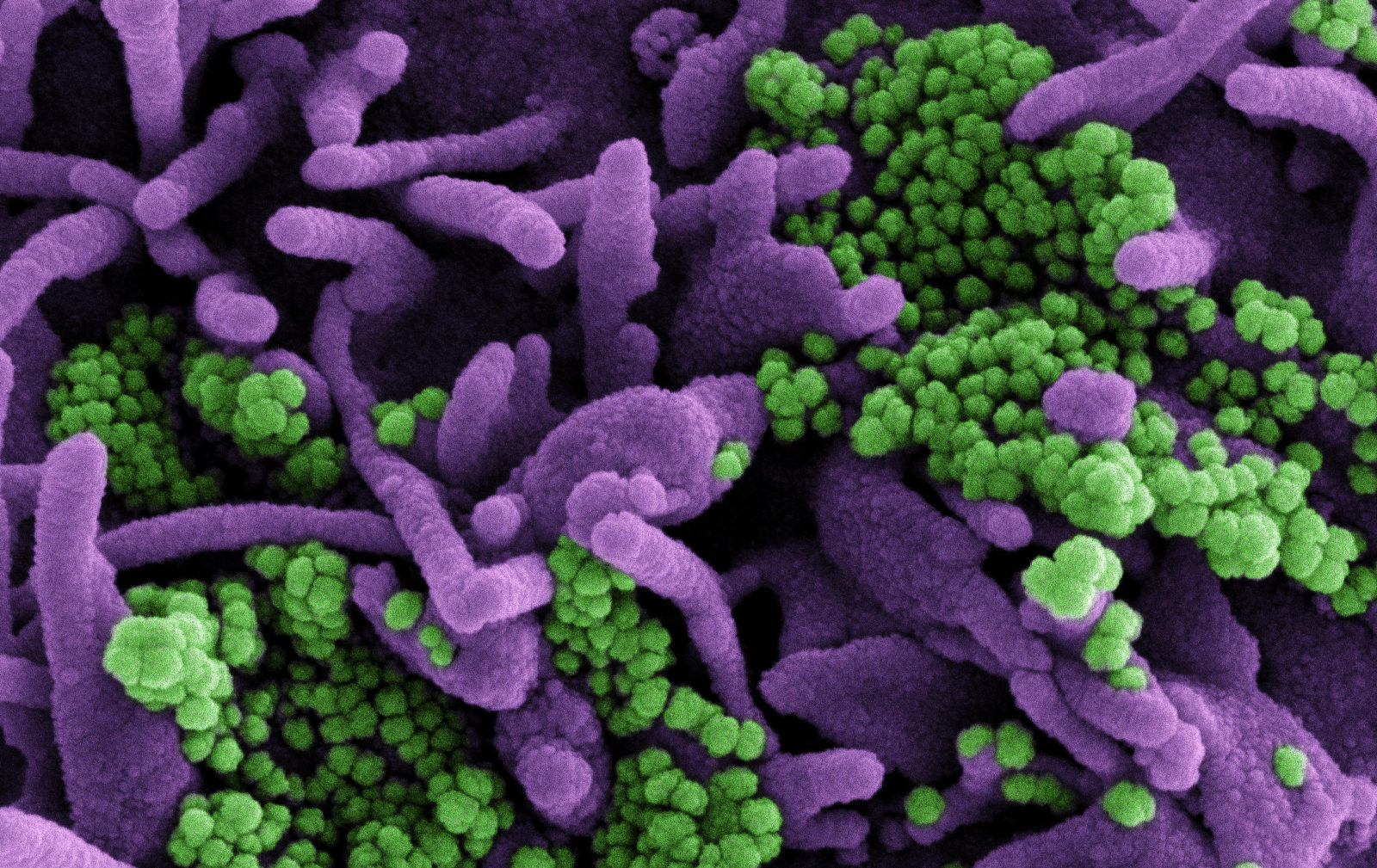 A colourised scanning electron micrograph of a cell (purple) infected with SARS-CoV-2 particles (green), isolated from a patient sample. Photo: NIAID/Flickr, CC BY 2.0

Mumbai: As scientists around the world learn more about the delta variant of the novel coronavirus, they have been finding that it is adept at escaping the protection COVID-19 vaccines induce in our bodies.

‘Delta’ is the WHO’s name, under its new labelling system, for the variant previously known as B.1.617.2. India’s virus genome sequencing consortium has detected this variant in a majority of the samples its labs have processed from around the country. The delta variant is more transmissible than the variants that have preceded it and can tolerate the effects of vaccines better. As a result, it has taken root in populations in countries around the world – over 60 at last count.

The first sequences of the delta variant were sampled in India in September 2020.

There is general awareness in India of the delta variant’s increasing prevalence, although exact numbers are wanting. Due to its role in the magnitude of India’s second COVID-19 outbreak and the possibility of further outbreaks in the country, some state governments, like those of Delhi, Karnataka and Tamil Nadu, have been easing their lockdowns slowly, with an eye on the test positivity rate.

On the therapeutic front, India’s drug controller recently approved two combinations of monoclonal antibodies for COVID-19 patients for emergency use: Eli Lilly’s etesivimab and bamlanivimab, and Roche’s casirivimab and imdevimab.

Both these therapies are indicated for patients with mild to moderate COVID-19 at ‘high risk’ of the disease becoming worse.

However, a study by French researchers, uploaded as a preprint paper on May 27, had some bad news. The researchers tested these monoclonal antibodies against virus variants they had isolated in the lab. They found that etesivimab, casirivimab and imdevimab could be active against the delta variant, but bamlanivimab lost its antiviral activity, likely because of the L452R mutation.

They also found that the delta variant had “enhanced resistance” to blood sera obtained from patients who had recovered from COVID-19.

There have also been some studies to assess the efficacy of the two major vaccines in India’s drive, Covishield and Covaxin, against the delta variant.

A study reported on June 7, by Bharat Biotech and the Indian Council of Medical Research, which together developed Covaxin, found that the variant decreased the shot’s neutralisation capacity.

They took blood sera from patients who had recovered from COVID-19 and those who had been inoculated with Covaxin, and used them to neutralise different variants in the lab. If the vaccine’s drop in neutralisation titre against the older B.1 variant 1 is x, it was 2.7x against the delta.

However, the study’s authors didn’t disclose an important conflict of interest and didn’t explain how they recruited the patients.

On June 3, India’s gene-sequencing consortium – formally, Indian SARS-CoV-2 Genomic Consortia (INSACOG) – reported that in a study involving 27 instances of breakthrough infections – i.e. COVID-19 infectious after vaccination – 19 had been caused by the delta variant. According to the study’s authors, this suggests the delta variant is more capable of infecting vaccinated people than the alpha variant (B.1.1.7, first reported from the UK).

(A more recent study of healthcare workers at Christian Medical College, Vellore, suggested that vaccines were protective but, by the authors’ admission, didn’t “look at the variants responsible for [India’s] second wave”.)

The UK government regularly tests around 45,000 citizens under its SARS-CoV-2 Immunity and Reinfection Evaluation (SIREN) study, for reinfection. Researchers part of the effort reported on June 11 that at the time the delta variant was dominant, the number of reinfections among those who had been previously infected or vaccinated was low.

A Public Health England (PHE) study also reported on June 14 that both the Pfizer-BioNTech and AstraZeneca vaccines offer more than 90% protection, after two doses, against hospitalisation for a delta variant’s infection.

Any new novel coronavirus variant is typically judged on three features: transmissibility, disease severity and impact on immunity conferred by prior infections and/or vaccines.

Previous studies paint a grim transmissibility picture. INSACOG has estimated that the delta variant could be 50% more transmissible than the alpha.

According to a study that PHE, which is the UK government’s health agency, reported on June 11, the delta variant is around 60% more transmissible, and likely more virulent, than the alpha variant.

In December 2020, the alpha variant drove a big surge in the COVID-19 case load in the UK.

(It’s typically possible to compare the delta with other co-circulating variants like the alpha, and not with older variants. This is because most studies consider patients that got infected in the last few months, when the older variants had faded out.)

The PHE study also said that there was a “significantly increased risk of hospitalisation” among patients infected by the delta variant than by the alpha variant. INSACOG’s study also found that the delta induced a higher viral load.

A study from the UK published on June 3 reported that although its neutralisation capacity dropped, the Pfizer-BioNTech vaccine could still protect recipients against infections of the delta variant.

A PHE study also found that the Pfizer-BioNTech vaccine had an efficacy of 33% against symptomatic COVID-19 infections of the delta variant after one dose, and 88% after the second.

The same study reported that the efficacy for Covidshield was 33% per cent after the first dose and 60% after the second. Against similar infections by the alpha variant, Covishield’s efficacy was 51% and 66%, respectively.

For example, according to GISAID, the open-source repository of the virus’s genomes, around 75% of samples sequenced in the UK in the last four weeks – 20,600 – contained the delta variant. However, India has thus far not shared any genome sequences for the same period.

INSACOG’s study itself ended on an alarming note: that prior infections, high seropositivity and partial vaccination may not suffice to stop the spread of the delta variant.