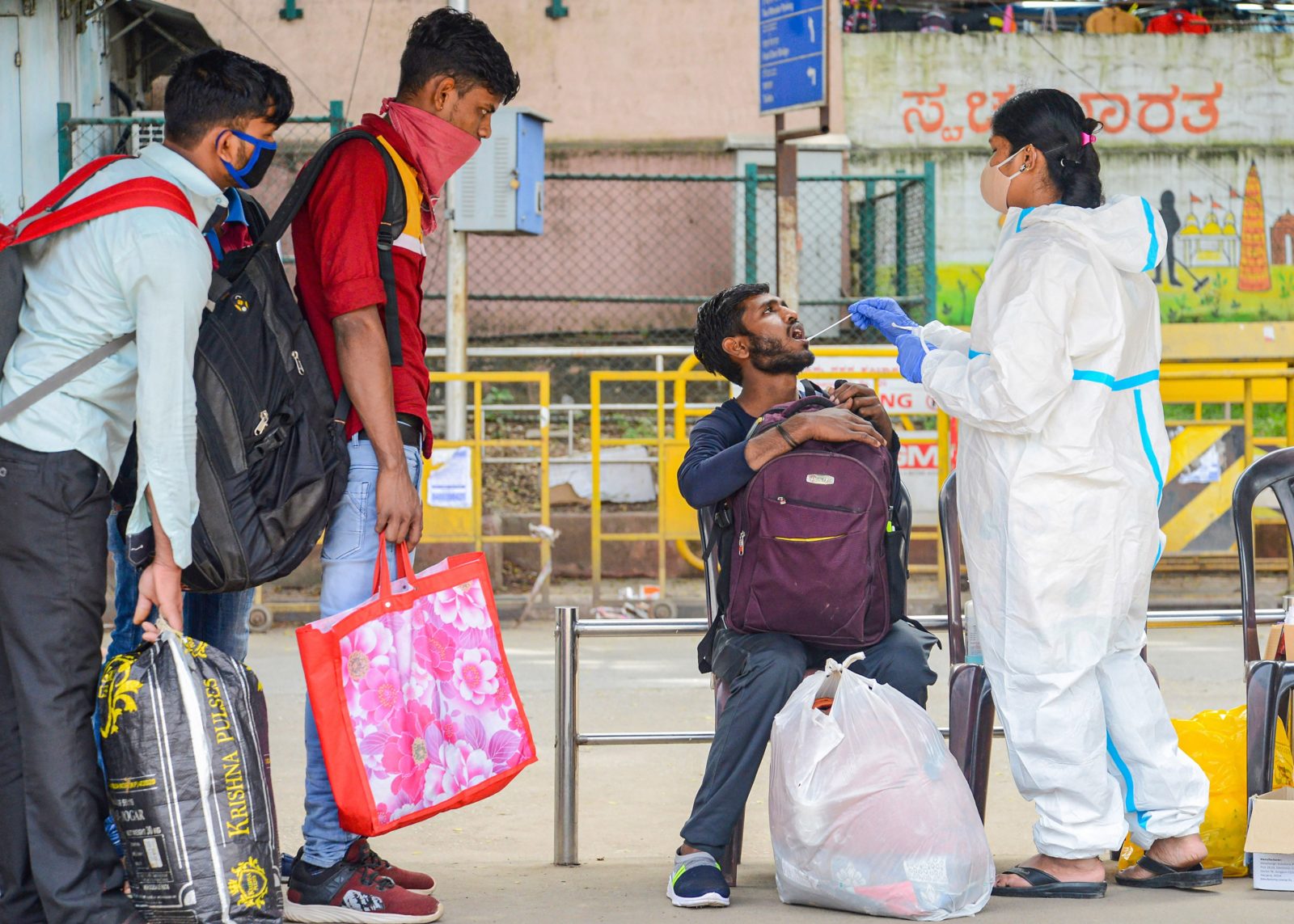 New Delhi: Early indications of COVID cases plateauing have been reported in some places but the trend needs to be observed, the Union government said on Thursday, while noting that 400 districts have logged over 10% positivity rate in the week ending January 26.

Stressing the need to continue with precautions to curb the surge in infections, it noted that Karnataka, Kerala, Tamil Nadu, Gujarat, Andhra Pradesh, Rajasthan were recording a high number of COVID cases and positivity.

Simultaneously, a decline in COVID cases and positivity rate have been observed in Maharashtra, Uttar Pradesh, Delhi, Odisha, Haryana and West Bengal, the government stated.

Addressing a press conference here, Lav Agarwal, the joint secretary in the Health Ministry, said, “Early indication of a plateau in cases are being reported in certain geographies. The trend needs to be observed and required precautions need to be continued.”

“Top 10 states in terms of active cases contribute to more than 77% of the total active cases in the country. Over 90% of these active cases are under home isolation, indicating mild to moderate clinical severity,” Agarwal said.

At the press conference, a comparison of the key indices during the second and third surge of COVID infections in India was presented.

It showed that on May 7 last year, at the peak of the second wave, 4,14,188 new cases and 3,679 deaths were reported. As many as 17,40,446 tests were carried out on that day and the proportion of fully vaccinated people was approximately 3%.

On January 21 this year, 3,47,254 new cases and 435 deaths were reported. A total of 19,35,912 tests were reportedly carried out on the day and the proportion of fully vaccinated people was approximately 75%.

“The number of active cases and corresponding deaths are much lower during the present surge vis-a-vis the earlier surges,” he said highlighting vaccination is providing support in terms of fewer cases, fewer hospitalizations and less severity of the cases being reported in the country.

Warning against any laxity in observing COVID-appropriate behaviour, Agarwal said 400 districts reported over 10% weekly COVID positivity while in 141 districts it was between five to 10% in the week ending January 26.

About the prevalence of the Omicron variant of coronavirus in India, he said, 1,292 cases of the latest variant of concern were found on genome sequencing in December which rose to 9,672 in January.

Agarwal said 11 states have over 50,000 active COVID cases, which include Karnataka, Maharashtra and Kerala with over 3 lakh active infections.

About the vaccine coverage, the press conference was informed that 95% of India’s adults have been administered the first dose of COVID-19 vaccine while 74% are fully vaccinated.

Also, 97.03 lakh healthcare, frontline workers and comorbid people aged 60 and above have been given the precaution dose of COVID vaccine while 59% of adolescents in the 15-18 year age group have received the first dose.

To a question over media reports that there are discussions if the third dose is needed for all, Agarwal said there has been no such discussion.

“Whenever a science and evidence-based discussion takes place we will share the factual information with you. Whichever vaccine has been launched in India was based on evidence submitted to the relevant technical group and there should be no doubt about it,” he said.

On reports that despite the Centre’s guidelines, molnupiravir is still being prescribed by some doctors in private practice, Agarwal said it is very important that protocols are implemented at the ground level.

“We have a task force and a joint monitoring group comprising technical experts. According to them, details of medicines that must be prescribed have been provided, webinars being held to disseminate clinical management protocols and we request everyone to follow those,” he said.

Asked if the third wave of COVID infections has already peaked, Agarwal said though certain geographies in the country have noted plateauing of cases to an extent and the infection spread rate has also reduced in some areas, there are also areas where infection spread and the number of cases are rising.

The overall picture is yet to emerge, the official said.

Agarwal also said there is clear evidence that infection spread and hospitalisation are high among the unvaccinated and they have severe symptoms.

Asked if the whole of the national capital has been vaccinated then who are the ones dying, he replied, “Delhi is an area where people from other states, including those left out from vaccination, visit. Anyone who is eligible must get vaccinated.”