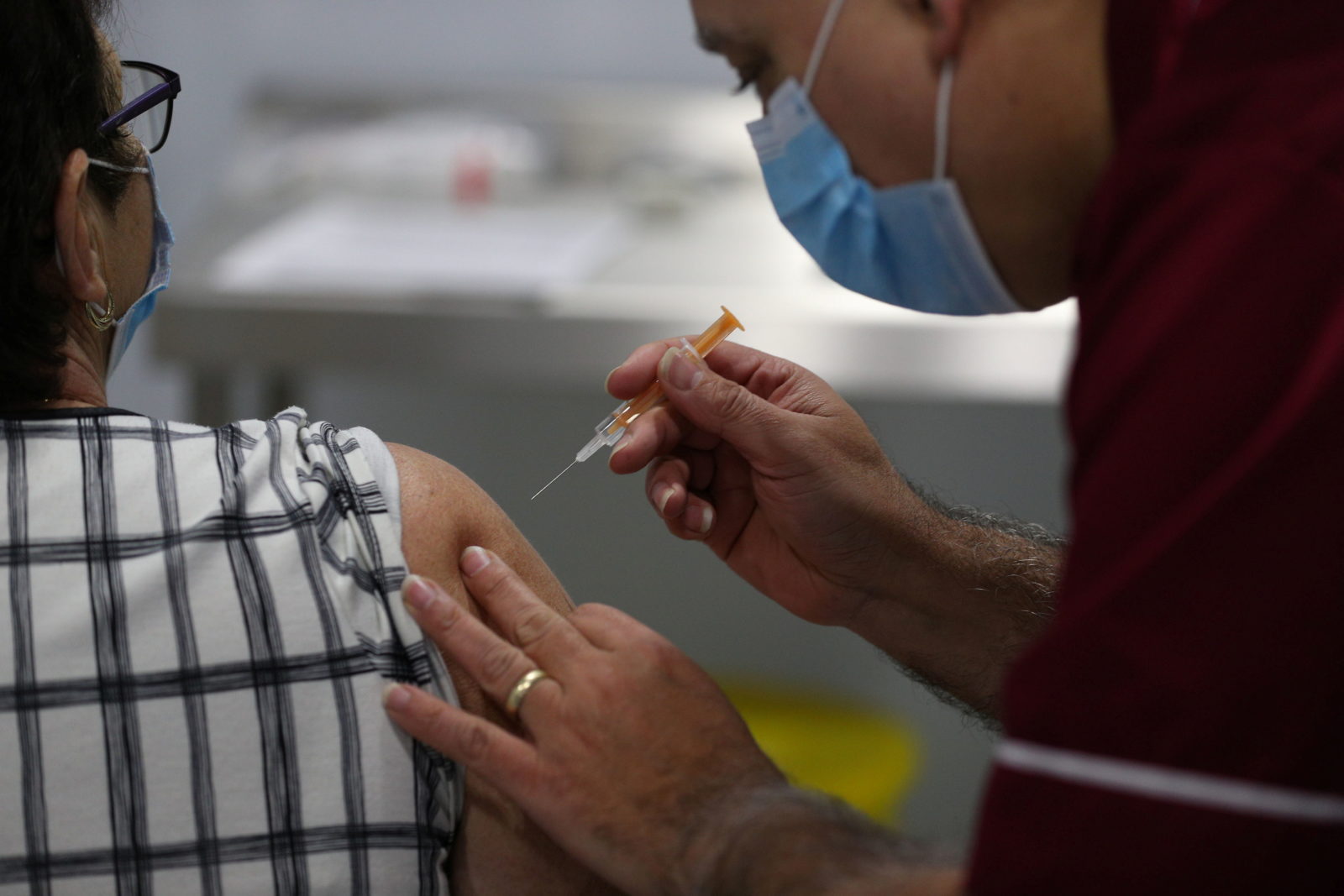 More ‘Made in India’ COVID-19 Vaccines in the Offing, PM Modi Says

A person receives a dose of the AstraZeneca COVID-19 vaccine candidate at a hospital in Britain, January 25, 2021. Photo: Peter Byrne/Pool via Reuters.

Bengaluru: A row erupted in Germany earlier this week after a local newspaper reported that the AstraZeneca COVID-19 vaccine candidate may not be useful for the country’s senior citizens.

Handelsblatt quoted unnamed sources to claim that the candidate may not have an efficacy of more than 8% in people older than 65 years.

But even though multiple groups have arisen to publicly defend the candidate and its merits, it appears that Germany as well as the EU may restrict the candidate’s use to people aged 18-64 years.

The controversy has garnered attention worldwide because AstraZeneca’s vaccine candidate is the cheapest of all the candidates that have been approved by regulatory agents of different governments. (This statement excludes Chinese and Russian vaccines that haven’t been tested properly.)

In India, for example, the government has placed an order for 11 million doses from the licensed local manufacturer, Serum Institute, at Rs 200 per dose ($2.74). The government has also donated millions of doses to neighbouring countries as well as to Brazil, Thailand and Morocco.

After Handelsblatt published its report, the UK regulatory agency – which approved the AstraZeneca candidate a month ago – as well as its German counterpart doubted the 8% claim.

The German health ministry has said Handelsblatt may have confused the candidate’s efficacy with the fraction of older people in AstraZeneca’s clinical trials in the UK, according to The Guardian.

“Around 8% of participants in the AstraZeneca efficacy trials were aged between 56 and 69 years old, only 3 to 4% were over 70,” the ministry said in a statement. “This does not result in an efficacy of only 8% among seniors.”

But this hasn’t meant AstraZeneca has a clear path to approval in the EU.

The EU has already placed an order for 400 million doses of the candidate, but grew frustrated when AstraZeneca failed to meet supply targets. The two entities organised a short series of meetings to resolve the issue, but the issue remained a source of great tension.

At one point, for example, the EU threatened to impose export controls in an attempt to force AstraZeneca, a British-Swedish company, to comply.

The European Medicines Agency (EMA) is expected to announce the AstraZeneca vaccine candidate’s approval today. And the Handelsblatt issue has raised its head once again.

There has been some speculation that the EMA may have received more data pursuant to its decision than the UK’s Medicines and Healthcare Products Regulatory Agency (MHRA) may have had last month.

However, The Guardian reported on January 26 that it “understands the EMA has not been given further data, it [has] only received answers to questions about the existing data.”

EMA executive director Emer Cooke told the European parliament’s health committee that the body’s approval is likely to include age-wise limits on who can’t and can’t receive AstraZeneca’s candidate.

For its part, AstraZeneca has defended itself saying the candidate provoked as good an immune response in people older than 65 years as it did among younger participants. However, it’s not easy to deduce the usefulness of this response from the statements.

Handelsblatt itself has since dropped the 8% claim but has also stood its ground that the vaccine candidate may not be helpful to people older than 65 years. A spokesperson of the German health ministry also admitted to The Guardian that the candidate’s efficacy is likely to be below 10% among this demographic.

This sequence of events is just the latest in multiple controversies and allegations AstraZeneca has had to wade through since announcing preliminary data from clinical trials in the UK and Brazil late last year.

AstraZeneca’s press release subsequently averaged the two numbers to claim a ‘net efficacy’ of 70%. But independent experts quickly pointed out that this was unscientific. The two groups of participants were in different countries – the UK and Brazil – and were part of different trial designs, making the numbers incomparable directly.

The company faced rougher weather after it applied for approval in the UK. The MHRA okayed the application but not without raising troubling questions about whether the company had cherry-picked data from the trials to pad its application.

The AstraZeneca vaccine candidate was originally developed by researchers at the University of Oxford. The university subsequently patented the underlying technology and AstraZeneca licensed it to Serum Institute of India, Pune.

After Serum Institute shared preliminary data from this trial, commenced in August 2020, the CDSCO chief approved it for “restricted use” in “emergency” situations on January 3, 2021.

Serum Institute CEO Adar Poonawala has said the company will be able to manufacture 500 million doses by mid-2021. However, the company has already assumed obligations to deliver more than a billion doses by the end of the year in India and around the world.