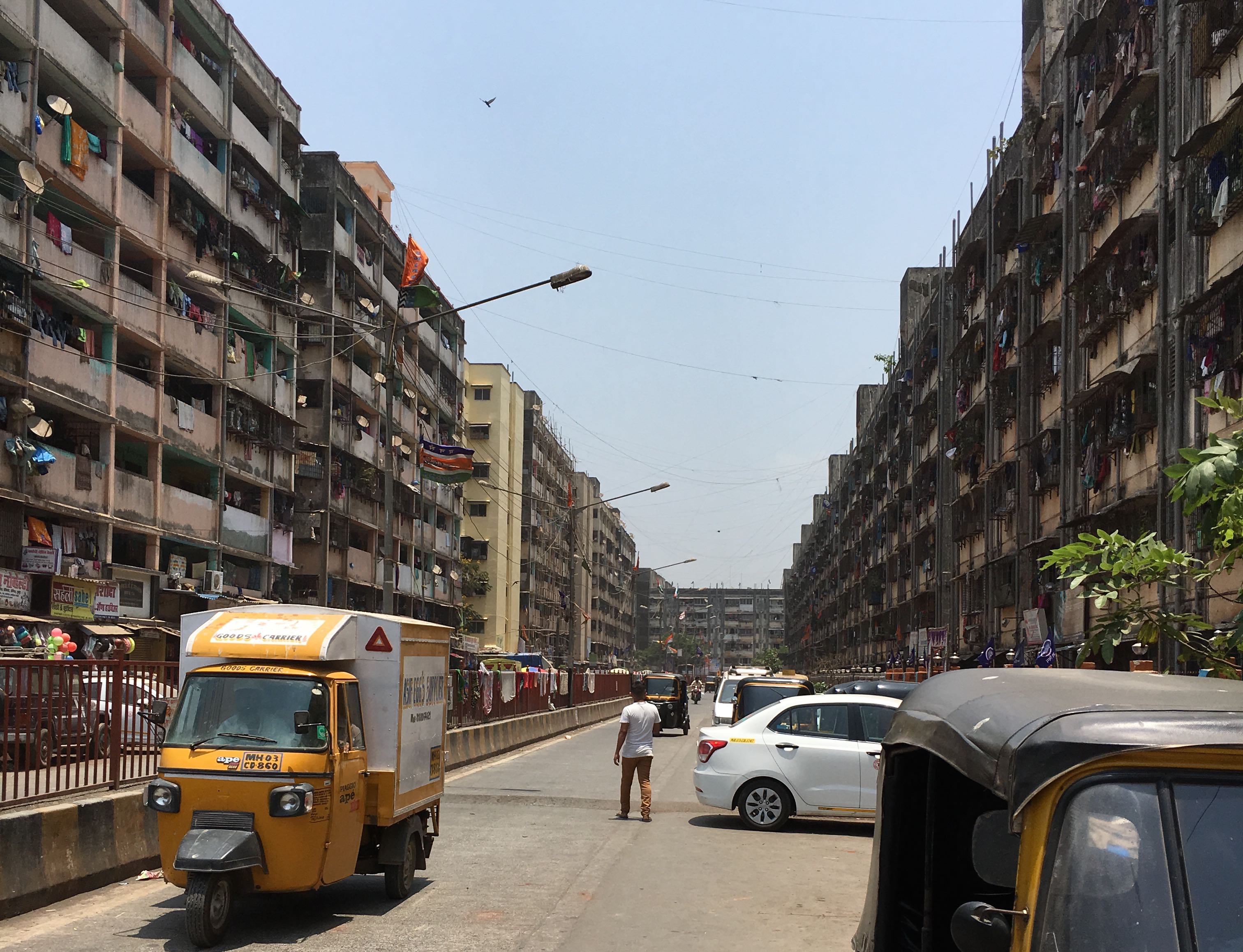 Mumbai: When infrastructure projects are planned in Mumbai, officials are often unsure about what to do with the hundreds of families who live in informal accommodations – chiefly slums – on land that belongs to various government agencies. The government is obligated to provide alternative accommodation (through its rehabilitation and resettlement policies), so the government has often done so in buildings in remote parts of the city.

The people in the slums are moved to multi-storeyed apartment complexes with houses that have toilets on the inside. Each resident receives ownership of the house after occupying it for a few years. And once that happens, the government and other authorities consider the ‘problem’ solved.

Many of those who have been shifted to these concrete tenements are starting to realise that life can be worse. People have lost their old jobs because their new homes are farther from their places of work. There are no schools or medical facilities nearby and, worse, the building themselves are bad for health.

These complexes are composed of densely packed high-rise buildings with barely three metres in between and a nightmarish lack of recreational area.

A new study has found that poor access to natural ventilation and sunlight and dearth of space has resulted in an abnormally high incidence of tuberculosis (TB) among the residents of these complexes. Overall, it establishes a strong correlation between mortality due to TB and housing conditions.

The study was funded by the Mumbai Metropolitan Region Development Authority’s Environment Improvement Society. It was conducted by IIT Bombay and an NGO called Doctors For You over one year, focusing on three resettlement colonies. While the residents were from largely similar socioeconomic backgrounds, their buildings were built differently. All three colonies are situated in Mumbai’s poorest ward, M-East, in the city’s east.

One of the study’s major conclusions was that almost one in 10 households in the complexes with poor access to sunlight and ventilation had a person infected with TB.

Mumbai has had over 1.3 lakh cases of the disease recorded in the region. In the M- East ward, nearly 78% of the residents live in dilapidated tenements; the ward is host to some 10% of the total TB cases in the city and to as much as 20% percent of drug-resistant infections.

To make sense of these startling numbers, researchers from the IIT and Doctors For You analysed data collected by a door-to-door survey in three colonies: Lallubhai compound (built 2003), Natwar Parekh compound (2008; built under the two-decade-old Slum Rehabilitation Authority’s scheme in Govandi) and a Prime Minister Grant (PMG) project in Ambedkar Nagar colony (1997), Mankhurd. In all, they visited 4,080 households (and made sure to register the details of people who already had TB).

They found that the Slum Rehabilitation Authority (SRA) structures in Natwar Parekh had the poorest layout of the three colonies, and 8-10% of the households here had people with TB. The PMG project had a relatively better layout, allowing for more ventilation and sunlight, and was host to only 1% of diagnosed cases of TB.

In absolute numbers: in Lallubhai compound, 145 households out of the 1,640 enumerated had at least one case of TB. The corresponding fraction at Natwar Parekh was 123 of 1,107 households and, at the PMG project, five out of 465 households.

On the other hand, residents of buildings outside the surveyed cluster – who had better access to sunlight, ventilation and more windows – had a lower incidence of TB.

The creation of a hotspot

The researchers who had designed the study had engaged some residents of the colonies to collect the data and specially them trained to that end. Along with medical history, these surveyors recorded information about how their interviewees’ houses were designed, including the number of windows, inlets for sunlight and the condition of the storey.

“While most families were reluctant to [share] the information initially, they eventually warmed up to the surveyors,” Ravikant Singh, the lead researcher and founder of Doctors for You, told The Wire. “We have had a long presence in the area and the involvement of local data collectors helped us.”

Singh’s organisation has been working with the urban poor and the marginalised in villages in several states for nearly a decade. For the TB study, he worked together with urban planners, architects, social workers, engineers and other doctors.

According to him, the surveyors focused on those had been diagnosed with TB, and that the affliction’s actual incidence in the colonies could be higher as most people sought treatment only when the condition worsened.

“Most of these [people] are already registered with the government hospital or the DOT clinic nearby. Very few of them have been approaching private hospitals for treatment,” Singh said.

More than 60% of residents interviewed for the study said they had been living here for over five years, suggesting that the subset of people with TB had contracted the disease after they had moved in. The study report states, thus, “that the infection hotspot may be lying inside the colony itself”.

The study also found that the incidence of TB was higher among families on the lower floors.

In Natwar Parekh compound alone, there were 59 eight-storey buildings crammed together. Lallubhai compound has 36 buildings and PMG colony, 16 relatively better-spaced buildings. In all, they included 12,000 households occupied by 70,000 people. The average size of the houses surveyed was 225 sq. feet.

Planners determine the space between two buildings according to the city’s Development Control Rules (DCR), which are different for regular buildings and those built under an SRA scheme. So while the distance between two privately constructed buildings of the same height is equal to a third of the height, SRA buildings can get away with just three meters in between them. The SRA’s “rationale was to accommodate as many families as possible in the available spaces,” Namrata Kapoor, an urban planning consultant and a coauthor of the study, said. “In the process, the living condition of the people in the rehabilitation buildings is highly compromised.”

Life in many of these colonies can be oppressive. One woman, who wished to remain unnamed, said her mother had died within a month of having moved to Lallubhai compound and her father had become bedridden soon after. “The elevators stopped working after a few months and he had to climb up and down… he just couldn’t take it,” she said. The air in the area is also poor because there is a landfill not far off.

Most residents of these colonies have either migrated from other parts of Maharashtra or are from Uttar Pradesh. They are mostly engaged in daily wage jobs. “Their living conditions are very poor. The average earning of most households is around Rs 10,000, with at least five persons dependent on this income,” Singh told The Wire.

The general perception is that TB is more common among those forced to live with subpar sanitary facilities – such as those were prevalent at the surveyed colonies. Visits to, and interviews with residents of, the Natwar Parekh and Lallubhai compounds revealed the complexes to be particularly filthy.

“Until recently, residents of Lallubhai compound and Natwar Parekh compound accessed water stored underground. These storages were not maintained properly, leading to regular contamination of water,” according to Singh. “But a month ago, repair work was undertaken at both compounds.”

Further, the colonies were almost always waterlogged for days after heavy rains. As a result, according to the report,

… there was dirty water around the buildings giving out foul smell, which forced the residents to keep their windows closed. This was aggravated by the fact that a large amount of garbage was thrown off the balconies and windows by the people staying on the upper floors, which accumulated on the open spaces between the buildings.

On the back of its observations, the report has stated that the buildings have been “designed for death” and asked for the DCR rules for SRA buildings be changed immediately.

“The condition is already so worrisome when the buildings are just eight storeys tall. We have learned that the state is planning to make them up to 23 floors,” Kapoor told The Wire. “With just three metres between buildings, these structures will prove to be a death trap.”

The report is going to be submitted to Maharashtra Chief Minister Devendra Fadnavis on April 11, with suggestions. “Since these structures can’t be changed, we have suggested for measures like installation of exhaust fans and [asking for] immediate attention to the sanitation in these colonies,” Singh said.

Srivari Chandrasekhar Is New Department of Science and Technology Secretary