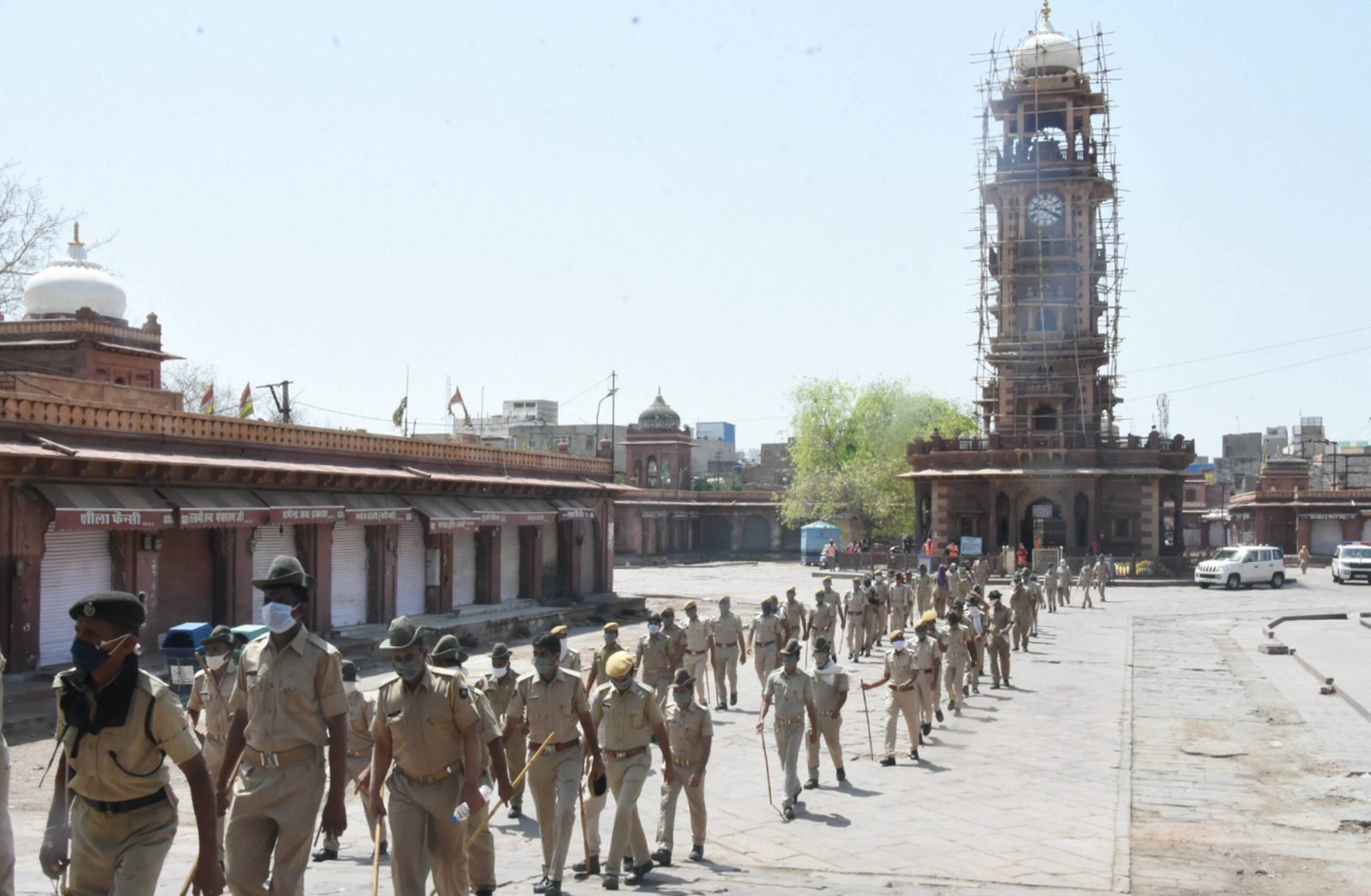 Featured image: Police conduct a route march during the nationwide lockdown, in wake of the coronavirus pandemic, in Jodhpur, April 23, 2020. Photo: PTI.

New Delhi: An internal study by the Indian Council for Medical Research (ICMR) prepared before Prime Minister Narendra Modi extended the nationwide lockdown showed that the new coronavirus would achieve community transmission within India and that the government could institute the lockdown only as a way to buy time to conduct more tests, something it hasn’t yet done.

The study, which was never published but whose conclusions were used in an advisory presentation made in the first week of April to the government, also categorically stated that the virus would continue to spread for over a year, according to a news report published in Article14 on April 23.

Many of the other statements in the study are well-known, including that lockdowns can’t reduce the number of people who will eventually be infected by the virus, but only distribute the transmission rate more evenly instead of letting it become excessively exponential. Another point in the presentation also noted that in the absence of “any other control measure, lifting the lockdown would allow a resurgence of transmission”, also known.

In effect, ICMR and NITI Aayog knew what many independent experts have been going on about for a while – that a lockdown is only a way to buy time to prepare our hospitals, isolation wards and testing centres, and to shore up on important drugs and catalyse drug and vaccine development, and can’t be the solution. However, the government has been trumpeting the lockdown as a solution – with Prime Minister Narendra Modi saying the lockdown could “nip the problem in the bud” – and celebrating the part it supposedly played in keeping India’s case load down.

Finally, the study called for collecting data from around the country, health workers paying bi-weekly visits to all homes, and placing all those who showed symptoms of COVID-19 under quarantine.

But notwithstanding other plausible reasons for why the number of cases in India is low, the lockdown was – by ICMR’s reckoning – not expected to achieve this outcome. And even now the government appears to be acting contrary to the advice of experts as testing rates stay low, case definitions remain restricted, and mission-critical drugs, personal protective equipment, personnel, therapeutic hardware, ICU beds and context-specific protocols all remain in short supply.

In addition, the presentation, delivered by NITI Aayog member Vinod K. Paul according to the Article14 report, also said that per ICMR’s assessment, lockdown extensions would only have a weaker effect on peak infections and would be “challenging to implement”.

Prime Minister Narendra Modi implemented just such an extension on April 14, until May 3, and said at the time, “Had India not undertaken holistic (sic) and integrated approach and in time not taken decisions speedily one gets goosebumps thinking what would be the situation in the country.”

While the presentation said the lockdown could in the best scenario reduce the peak number of infections on a given day by 40%, it noted that there wouldn’t be much of an impact on the final count. Experts from ICMR had also reportedly stated that the lockdown could only pull down the total number of cases by 20-25% – counter to Modi’s already questionable claim on April 14 that “India did not wait for the problem to aggravate”.

In his presentation, Pauls also urged the government to set up more medical facilities. When “daily infection in an area is 500,” he reportedly said, the government would require 150 ventilators, 300 intensive care beds and 1,200-6,000 general care beds.

The Article14 news report, by journalists Nitin Sethi and Kumar Sambhav Shrivastava, quoted former executive director of the National Health Systems Resource Centre T. Sundararaman: “The government numbers were not worth reading into because our testing rates were so poor, and up to mid-April, symptomatic patients without a contact history were excluded from testing.”

Members of ICMR and the Union health ministry, as well as Paul, hadn’t responded to Article14‘s request for comments.