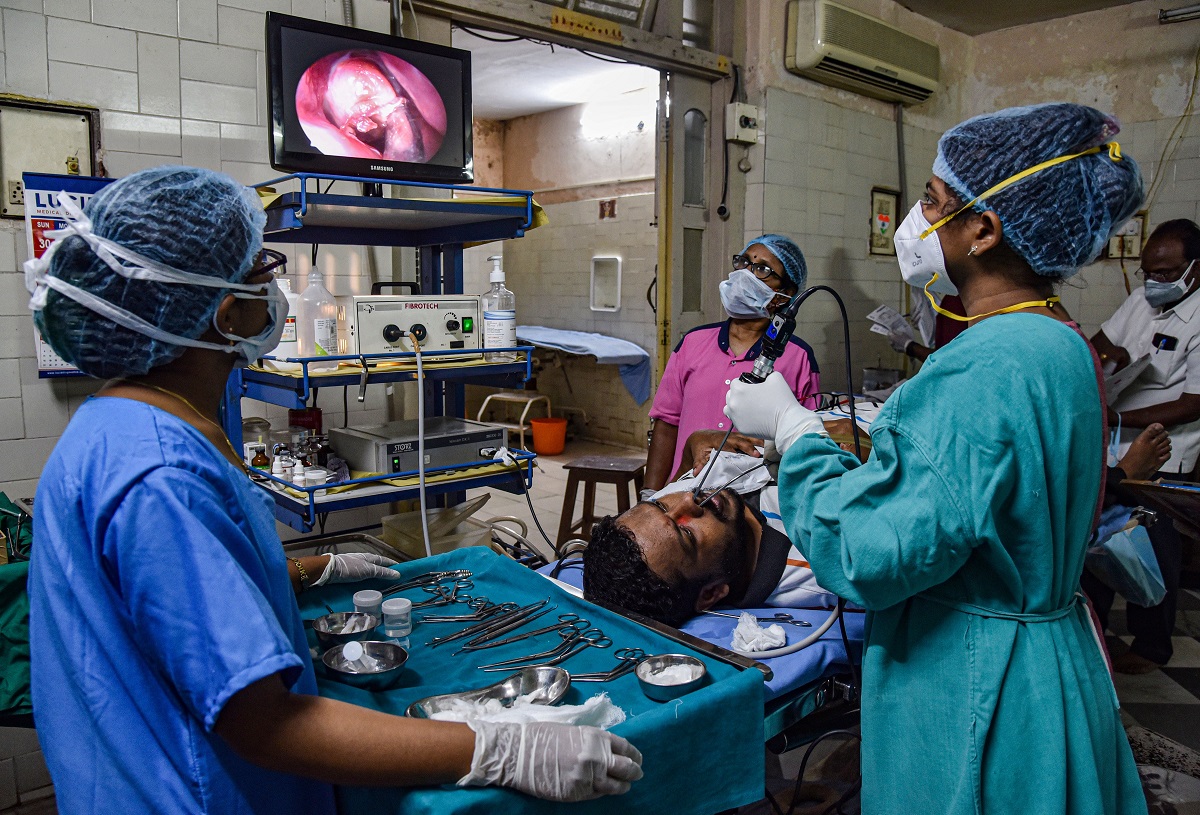 Doctors perform a diagnostic nasal endoscopy (DNE) on a patient to detect ‘black fungus’ infection, at a hospital in Hyderabad, May 20, 2021. Photo: PTI

New Delhi: A review of 400 published academic papers estimated that nearly 6 crore Indians are affected by serious fungal diseases, of which 10% are likely to be potentially dangerous mold infections.

The review, conducted by a team of experts from AIIMS, New Delhi; AIIMS Kalyani, West Bengal; and PGIMER, Chandigarh; along with the University of Manchester, estimated that 57 million – or 4.1% of the nearly 1.4 billion people who live in India – are likely to be affected by serious fungal diseases.

The authors said that while this is in line with similar reports from other countries like China, Brazil, Korea, Senegal, and Germany, these diseases are underappreciated in clinical practice. According to the authors, this is the first concerted attempt to holistically estimate the fungal burden in India. “In this study, we have systematically studied the incidence and prevalence of serious fungal infections in India, together summarised as burden,” they wrote.

The review was published in the journal Open Forum Infectious Diseases in December 2022.

The experts said that the total burden of serious fungal infections is more than 10 times the annual incidence of tuberculosis in India, “indicating an enormous population of patients affected by fungal diseases”.

The most common infection was vaginal thrush – or yeast infection, which affected around 24 million women of reproductive age, with repeated attacks. Hair fungal infection – known as tinea capitis – in school-age children also affected a similar number. It causes a painful infected scalp and leaves many with hair loss.

Major contributors to death were mold infections affecting lungs and sinuses, affecting over 250,000 people. Another 1,738,400 people had chronic aspergillosis (another mold infection) and 3.5 million had serious allergic lung mould disease.

Over 1 million people were estimated to have potentially blinding fungal eye disease, and nearly 200,000 had mucormycosis or the ‘Black fungus’ infection which was reported widely during the second wave of COVID-19 in India in April-June 2021.

In a press release issued by the University of Manchester, Dr Animesh Ray of AIIMS Delhi, the lead author of the article, said: “The total burden due to fungal diseases is huge but under-appreciated. While tuberculosis affects less than 3 million people in a year in India, the number of Indians affected by fungal disease are several times higher.”

Professor David Denning of the University of Manchester added that while there have been major diagnostic improvements in India in recent years, “with public health services… catching up with private hospitals in terms of capability”, fungal disease continues to be a threat to public health and a cause of significant morbidity and mortality.

“And there remain large parts of India with limited diagnostic capability, as evidenced by our inability to estimate some important diseases such as histoplasmosis and fungal asthma in children,” he said.

The authors hoped that the review will “stimulate better surveillance, improve access to and use of the new generation of fungal diagnostic tests”, and affect change in patient outcomes for the better.