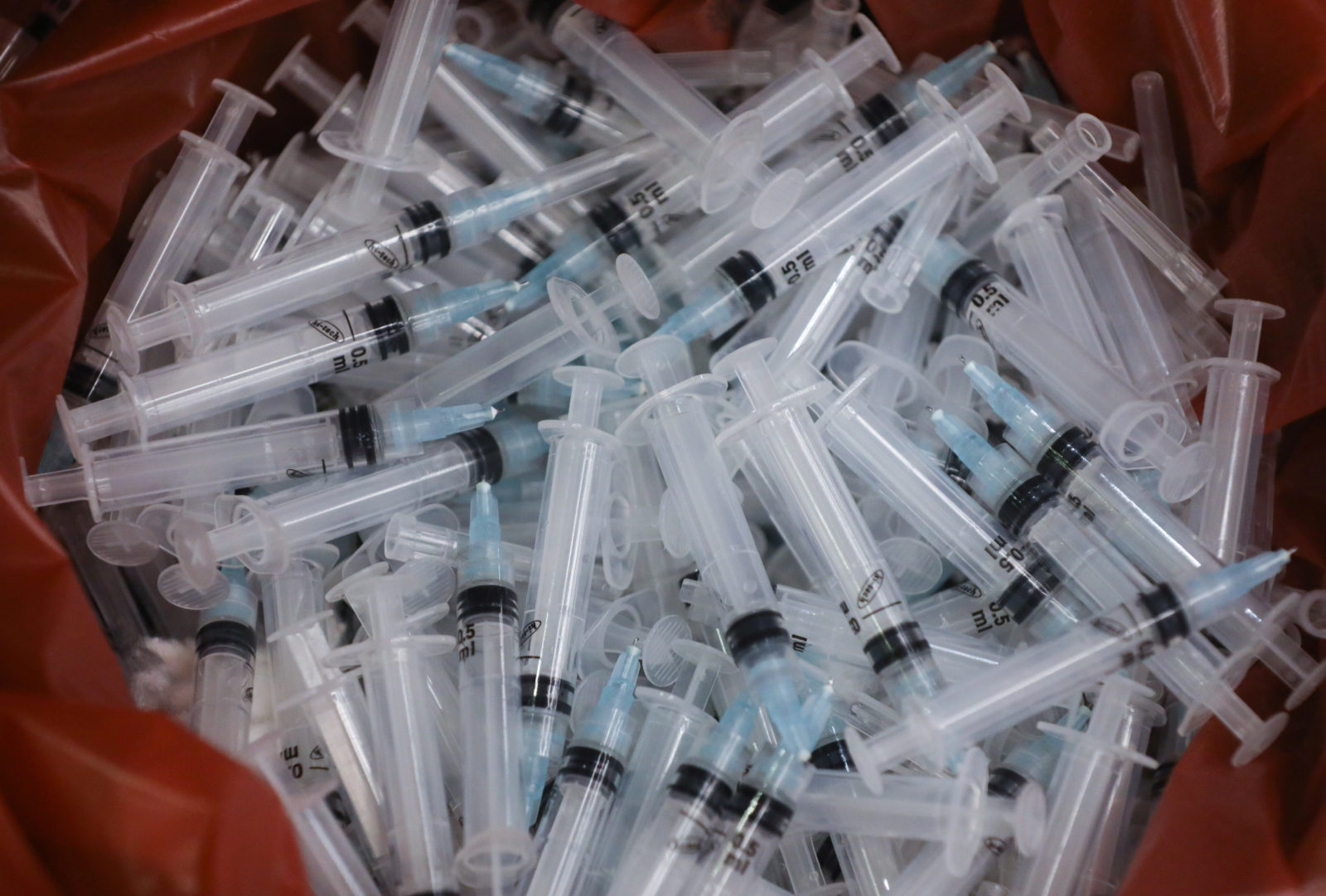 We Can’t Just Assume the Pandemic, Climate Change and Other Crises Will Work Out

Used syringes lie discarded in a bin after they were used to administer COVID-19 vaccines, Mumbai, August 11, 2021. Photo: Reuters/Francis Mascarenhas

New Delhi: Zydus Cadila’s indigenously developed needle-free COVID-19 vaccine ZyCoV-D was granted the ’emergency use authorisation’ (EUA) by the drug regulator on August 20, making it the first vaccine to be administered to beneficiaries in the age group of 12-18 years in the country, the Department of Biotechnology (DBT) said.

Describing the development as a momentous feat, Prime Minister Narendra Modi said the country is fighting COVID-19 with full vigour.

According to the CoWIN portal, over 57.5 crore doses of Covid vaccines have so far been administered in the country.

“India is fighting COVID-19 with full vigour. The approval for world’s first DNA based ‘ZyCov-D’ vaccine of @ZydusUniverse is a testimony to the innovative zeal of India’s scientists. A momentous feat indeed,” Modi said in a tweet.

It is the sixth vaccine to get the emergency use authorisation in the country after Serum Institute of India’s Covishield, Bharat Biotech’s Covaxin, Russian vaccine Sputnik V and the vaccines of Moderna and Johnson and Johnson.

Of these, Covishield, Covaxin and Sputnik V are in use.

These vaccines are being given to only those above 18 years of age and unlike ZyCoV-D, which has three doses, these are administered in two doses.

“Double good news for the nation! @CDSCO_INDIA_INF approves the 1st DNA-based, needle-free #COVID19 vaccine in the world – ‘ZyCov-D’ of @ZydusUniverse Making children of India COVID-safe, this vaccine can be used for individuals aged 12 and above,” Union health minister Mansukh Mandaviya said in a tweet.

“ZyCov-D is the 6th approved #COVID19 vaccine in India, and the 2nd indigenously developed one. PM @NarendraModiji’s vision of #AatmanirbharBharat and Make in India delivers another significant accomplishment!” he said in another tweet.

“After evaluation of interim Phase III clinical trial results in consultation with Subject Expert Committee, CDSCO has approved DNA COVID-19 vaccine (ZyCoV-D) of M/s Cadila Healthcare for restricted use in emergency situation in India for 12 years and above,” the Central Drugs Standard Control Organisation (CDSCO) wrote on Twitter.

The DBT said ZyCoV-D is the world’s first DNA-based vaccine against the coronavirus and when injected, produces the spike protein of the SARS-CoV-2 virus and elicits an immune response, which plays a vital role in protection from the disease as well as viral clearance.

The “plug-and-play” technology on which the plasmid DNA platform is based can be easily adapted to deal with mutations in the virus, such as those already occurring, it said.

“Zydus Cadila has received approval for Emergency Use Authorisation (EUA) from the Drug Controller General of India (DCGI) for ZyCoV-D today i.e. 20/08/2021, the world’s first and India’s indigenously developed DNA-based vaccine for COVID-19 to be administered in humans, including children and adults 12 years and above,” the government department said.

In another tweet, the CDSCO said the vaccine has a 66-per cent efficacy and it is to be stored in a temperature range of two to eight degrees Celsius. The vaccine is needle-free, to be administered intradermally in three doses at days 0, 28 and 56.

It is administered using PharmaJet, an applicator that ensures painless intradermal vaccine delivery, Zydus Cadila said in a statement.

The DBT said the interim results from the phase 3 clinical trials in over 28,000 volunteers showed a primary efficacy of 66.6% for symptomatic RT-PCR positive cases.

This has been the largest vaccine trial so far in India for COVID-19, it said.

The vaccine had already exhibited robust immunogenicity and tolerability and safety profile in the adaptive Phase I/II clinical trials carried out earlier. Both Phase I/II and Phase III clinical trials were monitored by an independent data safety monitoring board, the DBT said.

At a Union health ministry briefing on May 13, Member (Health), Niti Aayog, V.K. Paul had estimated that 216 crore vaccine doses would be available for people in the country between August and December.

Of these, Zydus Cadila will provide five crore doses, he had said.

The vaccine has been developed in partnership with the DBT under the Mission COVID Suraksha, the department said.

“It has been implemented by the BIRAC (Biotechnology Industry Research Assistance Council, a PSU of the DBT) and ZyCoV-D has been supported under the COVID-19 Research Consortia through National Biopharma Mission for preclinical studies, Phase I and Phase II clinical trials and under the Mission COVID Suraksha for Phase III Clinical Trial,” the DBT said.

The Vaccine Technology Centre, the vaccine research centre of the Zydus group, the Translational Health Science and Technology Institute, an autonomous body of the DBT, the Interactive Research School for Health Affairs, Pune and the GCLP Lab set up under the National Biopharma Mission (NBM) also played a vital role in this, it added.

Speaking on the development, Zydus Group chairman Pankaj Patel said, “To create the world’s first DNA vaccine at such a crucial juncture and despite all the challenges is a tribute to the Indian research scientists and their spirit of innovation.”