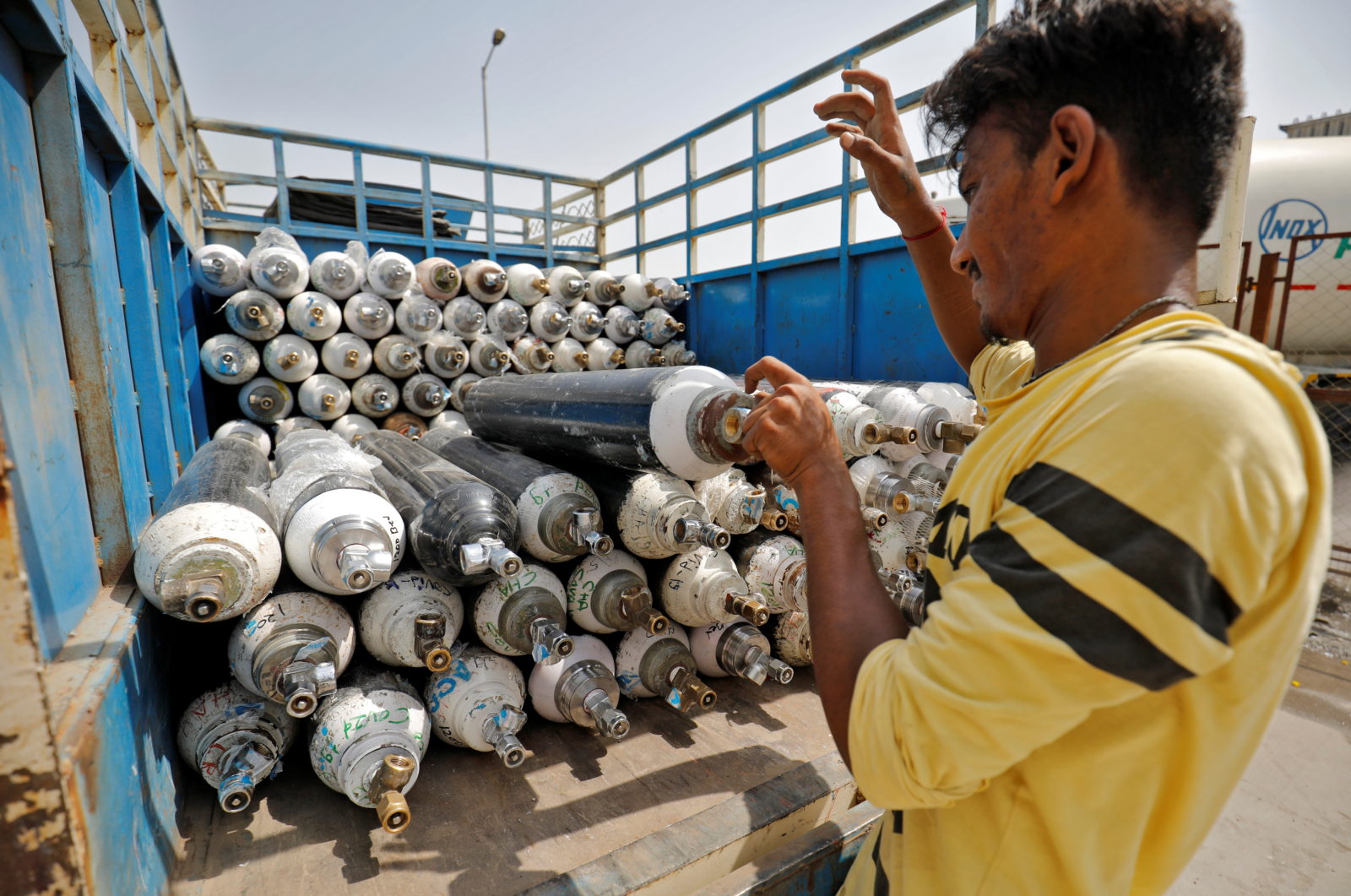 How Many Of India’s COVID Protocols Practice Safety and How Many Perform It?

A worker loads empty oxygen cylinders onto a supply van to be transported to a filling station, at a COVID-19 hospital in Ahmedabad, April 22, 2021. Photo: Reuters/Amit Dave

* The district in India with the highest number of active COVID-19 cases is Bengaluru – with 1.5 lakh. Pune is second with 1.16 lakh active cases; Delhi and Mumbai have nearly a lakh and a little over 80,000 active cases respectively. The capital of Karnataka reported 16,662 new cases in the 24 hours of April 23. Epidemiologist Giridhara R. Babu has said the city will report around 25,000 new cases a day from May 1, endangering its healthcare infrastructure. State health minister K. Sudhakar has already imposed a weekend lockdown in Bengaluru. (Times of India)

* Multiple countries have offered to help India deal with its second COVID-19 wave, which the WHO director-general has called a “devastating reminder” of what the virus can do. These include China, the UK, France and Russia. The European Union is also expected to formalise its assistance in the coming days, while members of Pakistani civil society have sought permission to enter India and help improve the oxygen supply. India has also sought help, especially to shore up its supply of medical oxygen, which the country’s burgeoning COVID-19-infected population needs in quantities beyond what the already prodigious national production is able to manage. (Business Today)

* The US has refused to lift a ban on the export of raw materials that India-based Serum Institute has said it needs to increase the production of Covishield. In response to CEO Adar Poonawalla request to reverse the ban, a US state department spokesperson reportedly said “the Biden administration’s first obligation is to take care of the requirements of the American people”. Subsequently, India’s external minister S. Jaishankar, chemicals minister Mansukh Mandaviya, senior officials from these ministries, a group of vaccine-makers in India (including Poonawalla) and India’s ambassadors to the US, Germany and the EU had a meeting to explore ways to increase production. (Indian Express)

* In the second part of her analysis, pharmaceutical industry veteran Neeta Sanghi explored some of the more subtle issues with India’s plan to allow everyone aged above 18 years to be vaccinated in India from May 1. For example, Sanghi writes, “People older than 45 years – 18.3% of the population – still require 371 million doses for full coverage” and “that vaccine manufacturers are likely to prioritise this part of the drive over the demands of state governments and private hospitals because it’s a wholly Central government initiative.” (The Wire Science)

* Here are some descriptors that Indian and international media outlets have been using to describe attributes of the health crisis in India, in addition to ‘unprecedented’ and ‘record-breaking’: buckle, spiral, overrun, staggering, hell, dire, paranoid, feckless and reeling, among others.