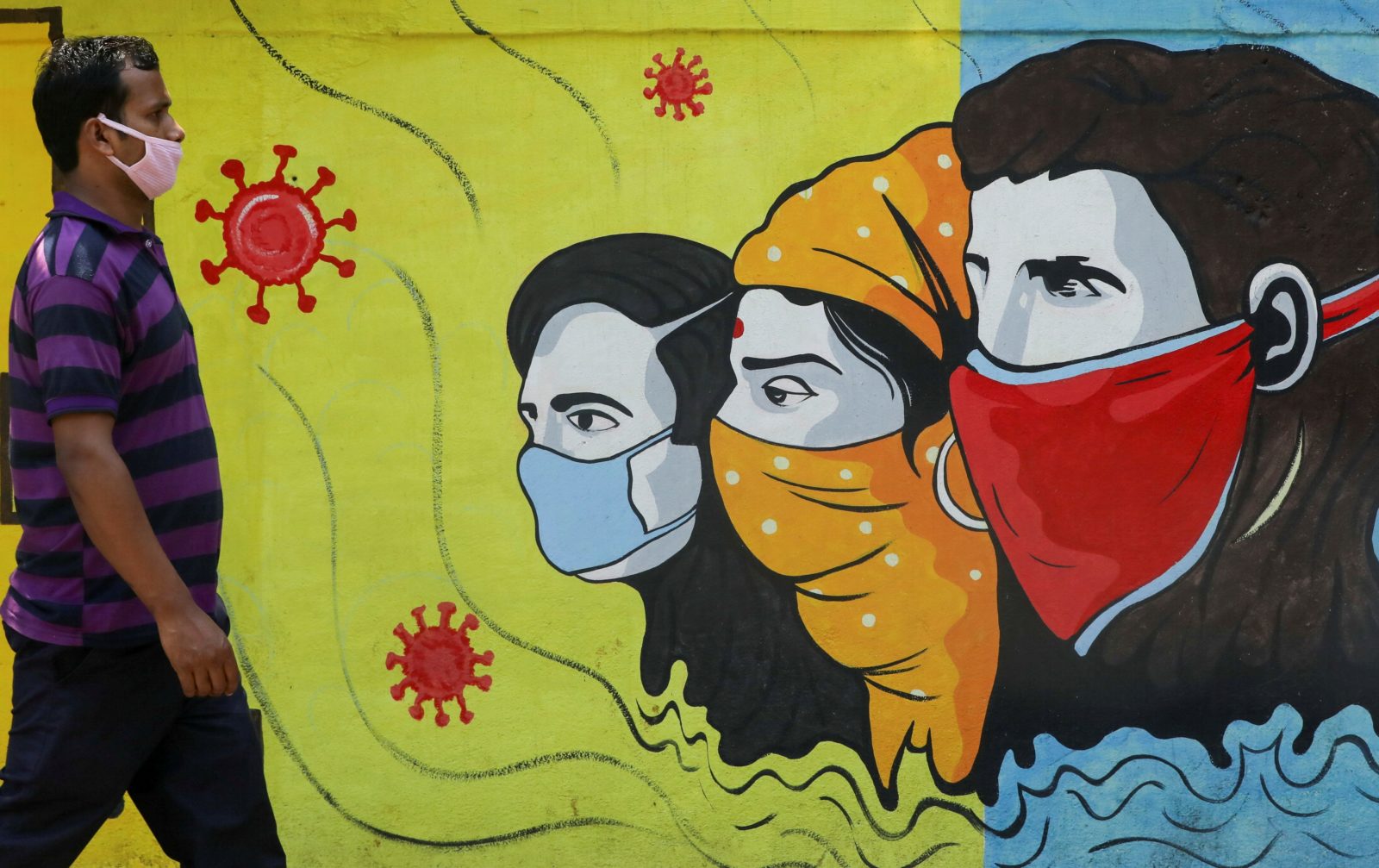 A man in a protective mask walks past COVID-19 graffiti on a street in Navi Mumbai, March 8, 2021. Photo: Reuters/Francis Mascarenhas/File Photo.

New Delhi: Indian drug regulators are expected to review data on one of the two candidate vaccines in its national COVID-19 vaccination drive after reports that some shot recipients had complained of unusual blood-related illnesses.

The Covishield vaccine candidate is derived from the AZD1222 vaccine developed by researchers at the University of Oxford, and licensed to AstraZeneca Plc, a British-Swedish drugmaker. The Indian company Serum Institute has a contract with AstraZeneca to manufacture Covishield doses and a purchase agreement with the Indian government.

Sigurd Hortemo, a doctor with the Norwegian Medicines Agency, told Reuters that they were yet to determine if the three cases reported from their country were linked to the vaccine.

AstraZeneca is yet to comment on the concerns – even as they compound an existing suite of issues the company is already dealing with. Foremost among them is its spat with the EU over supply issues.

“During the active phase of a COVID-19 infection or post COVID-19, there is inflammation of blood vessels with propensity for clot formation,” Dr C.N. Manjunath, director of the Sri Jayadeva Institute of Cardiovascular Sciences, Bengaluru, told The Hindu in January 2021.

“This can cause heart attacks. However, as the vaccine contains inactivated virus, it is immunogenic” and “produces antibodies but not the inflammation”.

N.K. Arora, a member of the National COVID-19 Task Force, told AFP that the body is considering “all adverse events” as well as that there are “no immediate concerns” because the number of such events in India, relative to the population, is “very, very low”.

There have been some news reports of Covishield vaccination followed by, but not necessarily causing, heart attacks:

During a heart attack, or myocardial infarction, a part of the heart doesn’t receive blood and the heart muscle is damaged. A cardiac arrest happens when the heart suddenly stops beating, and can be brought on by heart attacks.

According to IndiaSpend, the Ministry of Health and Family Welfare provided only incomplete information about adverse events following immunisation until February 26 – and no reports since then.

The last such missive said 46 people had died after being vaccinated and 51 had been hospitalised. IndiaSpend also noted that post mortem procedures had been performed only in some cases and that the government didn’t yet have all the investigation reports (at the time).

According to Arora, who spoke on March 13, there have been “50 to 60” post-vaccination deaths thus far. He also said the government is treating all of them as “coincidental”.

The spate of reports about blood-related issues with the AstraZeneca vaccine are tied to its underlying technology.

The Covishield, or AZD1222, vaccine platform uses an adenovirus vector. Researchers take an adenovirus and ‘delete’ some of its genes that allow this virus to replicate. They also add genes to enable the virus to manufacture the spike protein of the novel coronavirus.

When this adenovirus is injected into a body, the virus invades a cell and releases its genes. They hijack the cell’s biological machinery and begin producing the spike protein of the novel coronavirus.

Once the spike protein is expressed on the cell’s surface, the body’s immune system takes notice and begins to attack and destroy the affected cells. In the process, the immune response also develops a ‘memory’ of the spike protein.

So the next time some other virus invades the body and has a spike protein – like the novel coronavirus – the immune system could respond in earnest, before an infection takes root.

Scientists around the world have been working on adenovirus vector vaccines for many decades, and in this time have acknowledged one potential problem with this technology.

The vaccine’s efficacy could be affected if a human body has developed resistance, or even immunity, to the adenovirus vector itself. Satyajit Rath, an immunologist at the Indian Institute of Science Education and Research, Pune, told The Hindu that studies are yet to conclusively settle the debate.

However, both Rath and Jacob John, an epidemiologist formerly with Christian Medical College, Vellore, agreed that increasing the vaccine’s dosage could overcome this barrier.

This may be necessary considering AZD1222 is a double-dose vaccine and may have to be administered every year to recipients to ensure people’s bodies maintain a suitable level of resistance to COVID-19 infections.

Such repeated vaccination will also expose the body repeatedly to the adenovirus vector and encourage the body to develop an immune response against it.

Sputnik V uses different adenovirus vectors – subtypes Ad5 and Ad26 – in each shot, as a result potentially boosting the immune response without allowing the body to become familiar with the vector.

Inactivated virus vaccines like Covaxin, the other candidate vaccine in India’s drive, and mRNA vaccines like Pfizer’s and Moderna’s shots don’t have this problem and can be administered repeatedly.