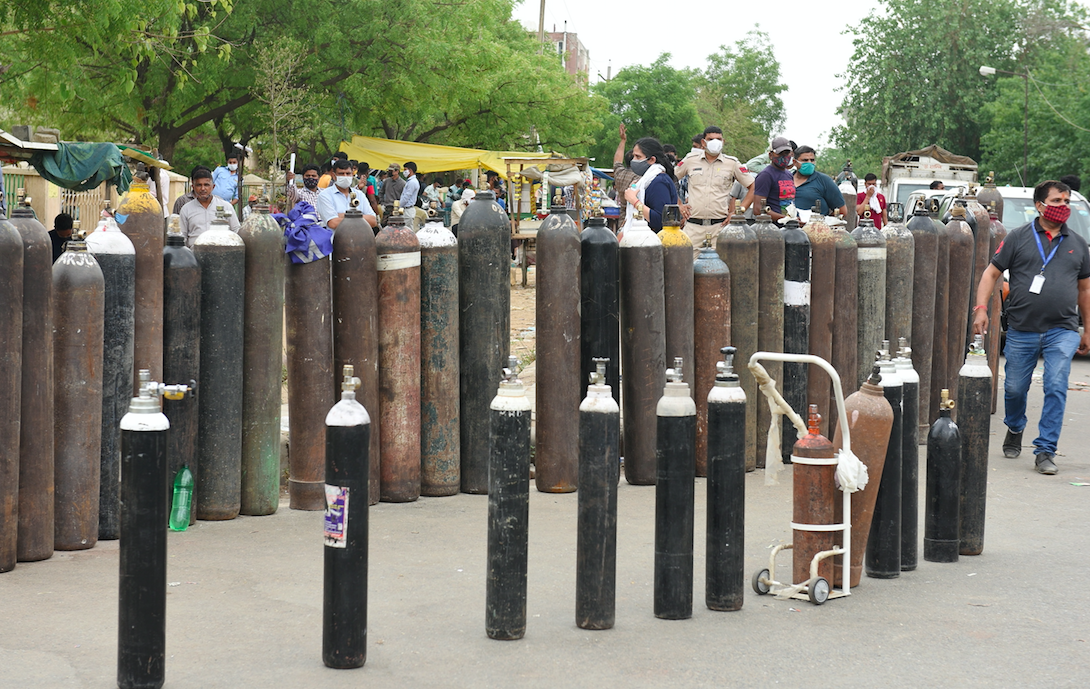 Representative image of a line of oxygen cylinders waiting to be refilled. Photo: PTI

Bengaluru: Oxygen crisis deepened in certain parts of Karnataka on Tuesday, with the deaths of seven COVID patients in Kalaburagi and Belagavi allegedly due to oxygen shortage.

However, Mining and Geology Minister Murugesh Nirani, who is in-charge of Kalaburagi district, dismissed the allegation saying that those who died had COVID infection at an advanced stage.

These incidents came close on the heels of deaths of 24 COVID patients in the last two days in Chamarajanagar district hospital allegedly due to oxygen shortage.

However, leader of opposition and former chief minister Siddaramaiah, who visited Chamarajanagar district hospital on Tuesday, claimed that 28 and not 23 people had died in the hospital from Sunday morning to Monday morning.

He alleged the incident reflected badly on the governance and demanded the resignation of health minister Dr K Sudhakar for the poor handling of the COVID-19 situation.

Taking a serious view of the oxygen shortage, Chief Minister B.S. Yediyurappa on Tuesday assigned the Large and Medium Scale Industries Minister Jagadish Shettar to arrange oxygen supply and coordinate with the Centre to get the state’s quota of oxygen.

Meanwhile, in Bengaluru a few hospitals raised an alarm against the oxygen shortage to treat the critically ill COVID patients.

An executive of the Chaitanya Medical Centre in Yelahanka said there was an oxygen crisis on Monday due to which they had to shift all their COVID patients to other hospitals.

“Now we have got the stock of oxygen, which would last for two to three days, but yesterday we shifted all our patients to other hospitals as the stock had exhausted,” the executive said.

Medax Hospitals in RT Nagar here had also flagged the shortage of oxygen.

In his letter to the relatives of the COVID patients, the medical director of the hospital Dr Srihari R. Shapur wrote that the facility was running out of oxygen and asked them to make necessary arrangements in other hospitals.

“This is to inform you that we are running out of oxygen supply. We are unable to provide oxygen care for the patient.We have been informed since May 1, 6 pm. We will shortly run out of oxygen by 5 pm on May 3. Kindly arrange for beds in different hospitals. We regret this situation,” Dr Srihari stated in the letter.

Rajmahal hospital too wrote to the Bruhat Bengaluru Mahanagara Palike (city corporation) stating that the vendor company was not supplying oxygen despite repeated requests.

“In this scenario, managing 30 plus COVID patients is becoming a challenge.We need your immediate intervention and assistance to tide over the situation,” the manager of the hospital said in the letter.

The Bengaluru Rural MP D.K. Suresh too expressed concern over the paucity of the life-saving gas in Rajarajeshwari Medical College in the city.

In his video message on Monday, he asked Chief Minister B.S. Yediyurappa to arrange oxygen for the COVID patients.