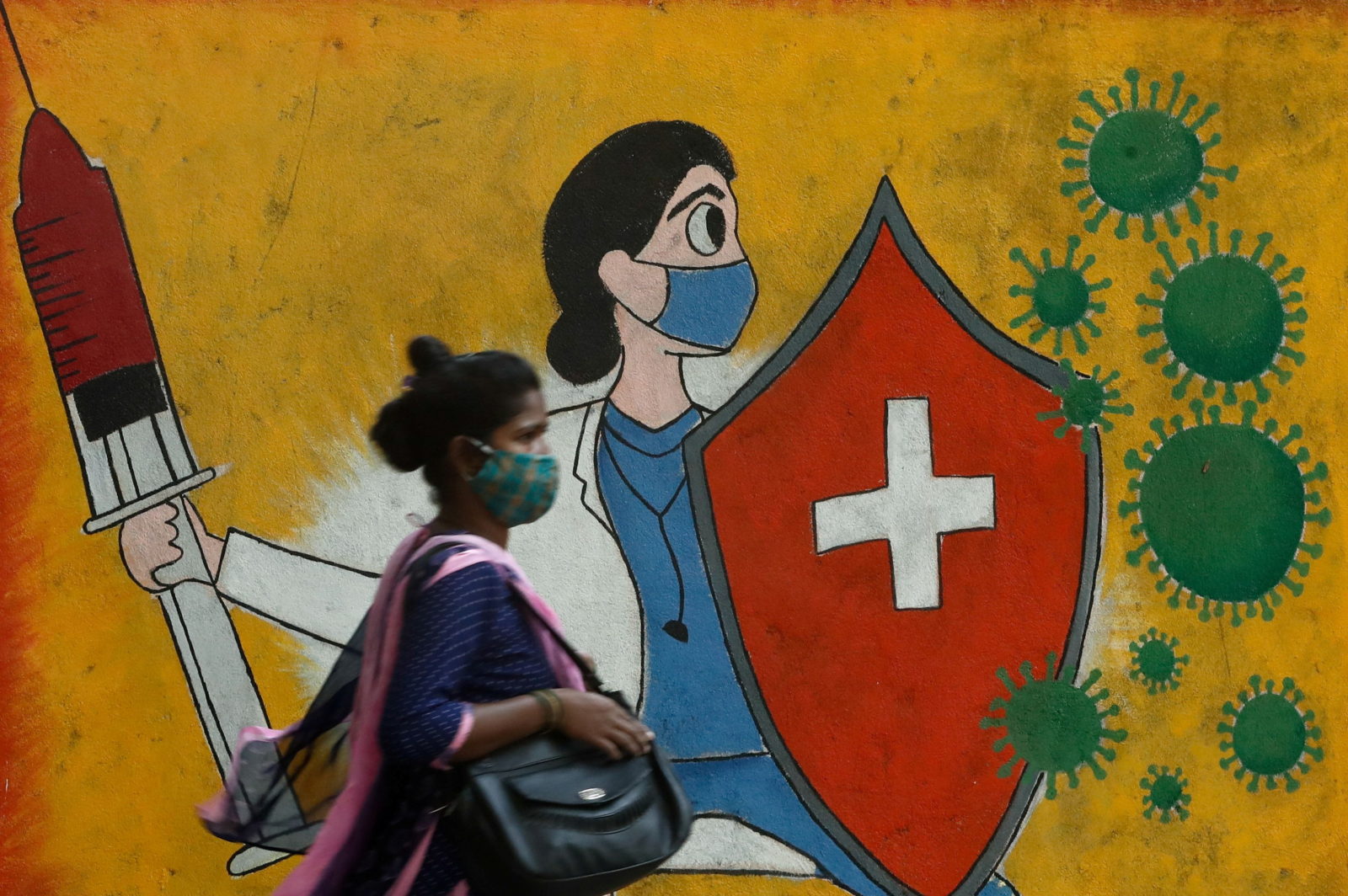 A woman walks past a graffiti on a street amidst the spread of COVID-19, in Mumbai, May 10, 2021. Photo: Reuters/Francis Mascarenhas

Mumbai: Since April 2021, Nazima (39) says she has been crushed under insurmountable debt. Her husband Nooruddin, a local law book vendor in Pune, died from a COVID-19 infection that month.

For the 20-day treatment at a private hospital in Pune, Nazima had to borrow money from her relatives and also sell some of her personal belongings. The final bill came to Rs 7.8 lakh.

Over and above the treatment itself, Nazima said she also had to foot the bill for 50 pairs of gloves every day. “I never understood why they asked me to buy so many gloves,” she told The Wire. “But when I denied it, I was plainly informed that my husband’s treatment would have to be stopped if I did not cooperate. I gave in.”

Once Nooruddin was wheeled into the hospital, Nazima never got to see him either. “Every time I pleaded with hospital authorities to let me see him, they would ask me to buy a PPE kit worth Rs 7,000 from their medical centre. I couldn’t have spent so much money when I was already struggling with the everyday medical bill,” Nazima said.

Shortly after Nooruddin died, Nazima began petitioning different departments of the state government seeking financial help. She never got any. Short of money in hand and no family member to support her, Nazima is now afraid of losing her house as well.

“My husband had taken a loan to build this house. After his death, I tried to pay EMIs for a few months,” she said. “Since I have no money, I gave up a few months ago.” In August, the bank sent her a notice warning that the house would be attached to the institution if she failed to pay the remaining Rs 8 lakh.

Like Nazima, a few kilometres away, in Chincholi village of rural Pune, Satya Kamble has been struggling since she lost her husband Deepak at the onset of the second COVID-19 outbreak in March this year. Kamble is 90% disabled and depended on her husband’s income. He was a local vegetable vendor who earned Rs 800-1000 a day.

Deepak and his two children got infected at the same time. While the two teenage boys recovered in a few weeks, Deepak developed a severe lung infection. He died after 10 days in an ICU at a private hospital in Pune city. The hospital charged Kamble Rs 5 lakh.

“I could not afford a private hospital but had to still take my husband there because no government facility close by was ready to admit her. I borrowed some money from my relatives and raised some more after selling my ornaments,” Kamble said. “In the end, I could manage only Rs 2 lakh.”

According to her, the hospital refused to release Deepak’s body when she couldn’t settle the full bill. “But a local corporator intervened and the hospital had to give in,” Kamble said. She still had to pay an additional Rs 25,000 for an ambulance to transport the body to Chincholi.

Stories like those of Nazima and Satya Kamble are not uncommon. As an ailing state health infrastructure failed miserably to contain the epidemic, many private hospitals took advantage and set off on a profiteering spree. Thousands of families across Maharashtra were thus pushed deeper into debt.

Worse, the profiteering appears to have happened even after the state government had issued an official order restricting private hospitals from overcharging patients for COVID-19 treatment in no ambiguous terms. The order capped the rate of treatment for 80% of COVID-19 beds in private hospitals.

Two large voluntary networks in Maharashtra – the Corona Ekal Mahila Punarvasan Samiti and the Jan Arogya Abhiyan – conducted a rapid yet wide-ranging survey to quantify the scale of the problem. They found that in spite of government measures, most hospitals continued to exploit people desperate to save their family members. The survey spanned 205 talukas in 34 districts of the state, with focus on women widowed during the pandemic.

The surveyors were able to obtain information pertaining to 2,579 people who or whose relatives had had complaints about large bills. Of them, only 121 people (4.6%) had such an experience at government hospitals or care centres. The remaining 95.4% had received treatment in private hospitals and privately managed care centres. And of them, 1,284 patients – almost half – had recovered at the end of treatment; the rest died.

Of those who died, 1,059 were adult males who have left behind their wives and young children.

Senior journalist and researcher Heramb Kulkarni, who started the Corona Ekal Mahila Punarvasan Samiti to help women widowed during the pandemic, said their findings are clear that state’s fee-capping orders “were blatantly violated”.

The government had imposed ceiling costs of Rs 4,000, Rs 7,500 and Rs 9,000 for routine isolation, ICU and ventilator beds, respectively. But the survey found that patients had been overcharged Rs 21,215 per day on average for treatment at private hospitals – and the total excess on the average bill was as high as Rs 1,55,934.

Medicines weren’t exempt from the ‘surge demand’ prices either. The survey found that the average medicines expense for patients at government hospitals was Rs 17,000 – versus Rs 90,000 at private hospitals. (For this comparison to be valid, the surveyors assumed that the severity of disease in both groups of patients was similar.)

Dr Abhay Shukla, the national co-convenor of the Jan Swasthya Abhiyan, says that in some cases, patients were not provided with hospital bills. Shukla points to the recently amended Bombay Nursing Home Registration Act that mandates proper bills to be handed over to the patients. “Most private hospitals were found to be violating this law. Such illegal practice attracts strict action from the government, even deregistration of these hospitals,” Shukla notes.

Kulkarni travelled across Maharashtra to meet affected families. He said most of the affected families preferred government hospitals: they “belong to the lower strata of society” and their members are employed in the “unorganised sector, with very little to no access to a proper healthcare system. And with the main earning member dead in most cases, the entire family is now devastated.”

In the absence of government schemes for COVID-19 victims, most women have turned to other welfare schemes – only to run into another problem: many of them said they haven’t managed to get past the red tape.

Shubhangi (34), from Shrigonda taluka in Ahmednagar, lost her husband Chandrakant, a veterinary doctor, in April this year. She has since applied four times for the Centre-run Bal Sangopan Yojana.

“Under this scheme, I am eligible to get Rs 1,100 every month, but I must have spent over Rs 2,500 to just photocopy my documents and send them to different government departments,” Shubhangi said. “I have yet to hear from them.”

According to Kulkarni, Shubhangi’s experience typifies that of most others documented by the survey. “It is tragic that the state makes them run around for such a paltry sum,” he said. “Most women have never stepped out and the state expects them to navigate through different departments and also transform themselves into primary breadwinners.”

The state-funded health insurance scheme Mahatma Phule Jan Arogya Yojana was supposed to ensure free care for COVID-19 patients throughout Maharashtra. But out of those surveyed, only 3.8% (98) received the money they were entitled to under this scheme, towards their hospital bills.

After any disaster, the state steps up and focuses on rehabilitation. But, Kulkarni said, this wasn’t the case with the COVID-19 epidemic. “Unless the government treats this pandemic like any other natural calamity and works towards resettling and rehabilitating the affected families, this disaster can’t be overcome easily”.

On October 12, following a meeting with the team of Jan Arogya Abhiyan and Corona Ekal Mahila Punarvasan Samiti, the state health minister Rajesh Tope agreed to conduct a state-level audit to evaluate the extent of this exploitation. “In the meeting, the state health minister also agreed to set up a state-level coordination committee along with representatives from our networks to ensure we also reach out to victims in rural parts of the state,” Shukla shared. The Jan Arogya Abhiyan team has also sought display of the patients’ rights charter at every medical establishment to ensure they are made aware of their rights and not duped by private hospitals.