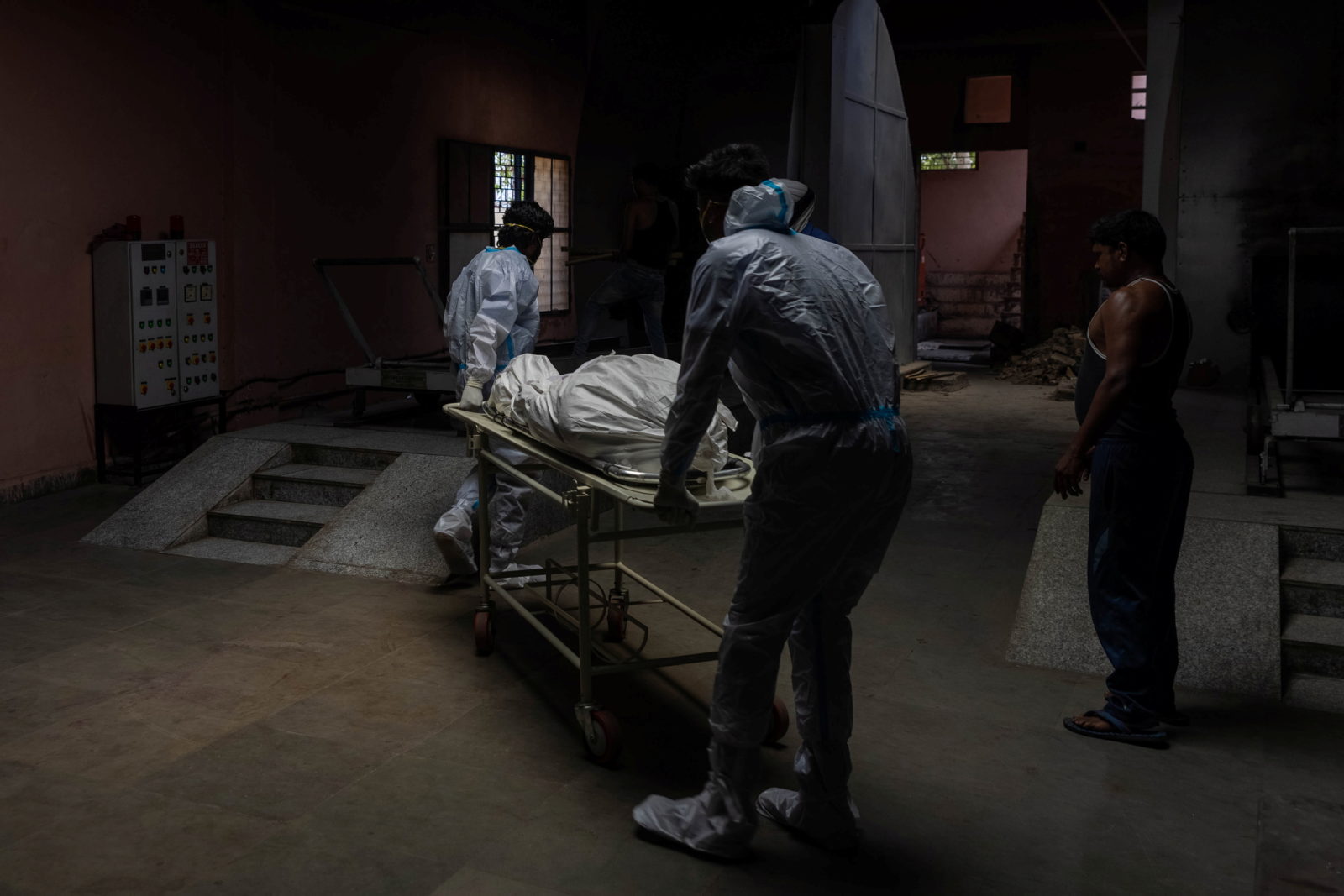 Representative photo: Health workers carry the body of a person who died from complications related to COVID-19, at a crematorium in New Delhi, India, June 2021. Photo: Reuters/Danish Siddiqui.

During April and May, 2021, Madhya Pradesh saw an astonishing rise in mortality. According to death registration data reported by Rukmini S., during these two months the state saw 1.7 lakh “excess” deaths over and above what would be expected from previous years’ data. In May alone the number of registered deaths was around five times the numbers seen in 2018 and 2019.

Shocking as they are, these figures may underestimate the true scale of this surge. According to the latest available data only around 80% of deaths in Madhya Pradesh are registered. Total excess mortality during these two months may even have been higher.

Taking the figures at face value, let’s try to get a sense of what they mean. In a population of around 85 million, 1.7 lakh excess deaths amounts to around 0.2% excess mortality (2 excess deaths per 1,000 people). A panchayat with a population of 5,000 would typically have seen around 10 extra deaths during the two month period.

In contrast with the figure of 1.7 lakhs, there have been fewer than 5,000 reported COVID-19 deaths from Madhya Pradesh during 2021 so far. Excess mortality is thus over 35 times recorded COVID mortality. We don’t know whether all of the excess deaths were due to the novel coronavirus. But we can say with confidence that the state is failing to record almost all of its COVID-19 deaths.

If we assume that a large part of the excess mortality was, indeed, from COVID-19, then what does this say about the fatality rate of the disease?

The infection fatality rate (IFR) of COVID-19 is the fraction of people infected with SARS-CoV-2 who perish. IFR is not, in general, constant across different regions, or in time. We know that IFR will be influenced by the variants of SARS-CoV-2 circulating. But it will also depend on the environment in which the virus circulates, most importantly the age structure of the population, and the availability of medical care.

We can take the age structure of Madhya Pradesh into account to try and calculate the expected COVID-19 IFR in the state. For this purpose, let’s use two international studies from 2020, one by Megan O’Driscoll et al (paper 1), and the other by Andrew Levin et al (paper 2).

Using Madhya Pradesh’s estimated population pyramid for 2021 we expect the state to have a COVID-19 IFR of 0.21% based on the first paper, and of 0.36% based on the second.

These percentages tell us that if everyone in the state was infected with the virus, we would expect 1.8 lakh deaths (paper 1), or 3 lakh deaths (paper 2). It is astonishing that the 1.7 lakh excess deaths recorded in just two months are close to the first estimate. Surely not everyone in the state was infected in a short period of time. Moreover, some regions of the state were badly hit last year too, and we would expect some immunity to the disease to protect those previously infected from severe illness.

To explain the huge toll in April and May, we must assume some combination of factors:

* Deaths from other causes as a result of overwhelmed health systems

High spread, including in rural areas

We know that COVID-19 can spread easily in cities. But this wave has, additionally, seen a flood of reports of rural outbreaks from around the country. Spread into rural areas was likely accelerated by highly transmissible variants and unrestricted mobility as the wave was rising.

Once disease enters a village it seems that it can rage through the population. A study of rural outbreaks, based on news reports from across north and central India, found many examples of rapid spread within villages. The reports often mentioned a large fraction of villagers experiencing symptoms such as fever and breathing difficulties.1

Amongst the sixty-one villages or clusters looked at, median excess mortality was around 3 per 1,000. A typical village of around 5,000 would lose around 15 inhabitants in the space of two to three weeks. A significant minority of villages saw even higher mortality, rising to over 5 per 1,000.

These reports showed that rural mortality can be very high; but they could not tell us how common these village outbreaks were. The excess mortality data strongly suggests the rapid and devastating spread journalists saw in many villages was typical rather than exceptional, at least in Madhya Pradesh.

There is limited genome sequencing data from Madhya Pradesh on GISAID, the open-access repository of genomic data. The limited data suggests that during the latest wave, the delta variant came to dominate over a mix of variants which included both alpha and B.1.617.1 (a variant related to delta whose properties are less well studied). This shift towards delta is broadly similar to what unfolded in many other parts of the country.

The variant story is incomplete for want of good data, but it seems likely that more lethal variants pushed up COVID-19 IFR in Madhya Pradesh.

Aside from variants, it is likely that poor health infrastructure and a lack of medical oxygen drove IFR up further. In an order dated April 30, the Madhya Pradesh high court cited newspaper reports detailing as many as 74 deaths due to disruptions to oxygen supply. It is likely that the reported occurrences were the tip of an iceberg, and that such occurrences shot up during May.

While much of the reporting focuses on cities, the rural reports discussed earlier point to a lack of oxygen and medical care being the norm in rural areas.

Deaths due to other causes

Deaths from many causes are likely to increase when medical services are overwhelmed. For example, infant mortality and maternal mortality are both sensitive to healthcare disruptions; and both are already considerably higher than the national average in Madhya Pradesh.

Additional data and detailed surveying may be needed to understand the relative contribution of COVID-19 deaths, and deaths from other causes, in the state’s mortality surge.

Madhya Pradesh’s huge mortality surge points to rapid spread of disease and high fatality rates. It is shocking – but consistent with data emerging from around the country. In a state where around 70% of the population is rural, it seems likely that the virus penetrated deep into rural areas.

More lethal variants of the virus probably led to more severe illness. Weak healthcare infrastructure meant that many people had nowhere to turn when illness struck. Almost none of the COVID-19 deaths which occurred were officially recorded. It is likely that deaths from other causes rose as the epidemic overwhelmed the limited resources available.

Reports emerging from around the country tell us to discard any assumptions about slow rural spread or low mortality. They also tell us to treat official COVID-19 death-counts with extreme scepticism. When it comes to tracking the toll of the pandemic, yet again we see the government failing in its responsibilities, while data-gatherers and journalists step in to fill the gaps.