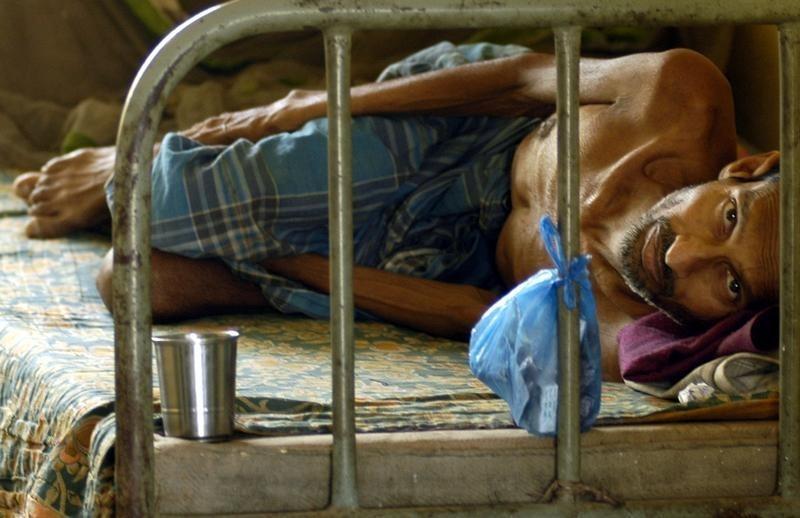 A patient suffering from TB rests inside a hospital in Agartala, March 2009. Photo: Reuters/Jayanta Dey/Files

These documents are important in the country’s assessment of how well its tuberculosis (TB) elimination programmes are going. In 2020 alone, India spent Rs 3,300 crore on its TB programmes.

The first one, the prevalence survey, is actually a new effort and offers a previously unavailable way to assess India’s progress and what course correction might be needed, if any.

However, it appears to be riddled with problems – at least eight are listed below. They include biases in favour of some states, missing data, oversight of forms of disease and notification discrepancies, as well as data that seems to be at odds with the government’s confidence.

Together, they undermine confidence in the survey and raise concerns about whether the national government has a clear picture of what it needs to do to eliminate TB in India by 2025. Let’s begin with that.

1. Missing target – Union health minister Mansukh Mandaviya said on March 24 that India was well on track to eliminate tuberculosis (TB) by 2025, and attributed this to the “leadership” of Prime Minister Narendra Modi. While the WHO had set 2030 as the target to achieve this extraordinary feat, Mandaviya added, Modi had achieved it five years early.

It also said the prevalence-to-notification ratio was 2.84 for the country as a whole. This means that for every 2.84 persons with TB, only 1 was registered in the national surveillance system. The other 1.84 were ‘missed’.

The main challenge in the fight against TB is the missing cases. And 1.84 is a big number.

“This high ratio is … [a] clear indicator that India is off the mark in achieving elimination in the next three years,” a TB expert who advises the Union government said on condition of anonymity.

2. Missing data – The report says little about individual states’ efforts to eliminate TB, according to experts to whom The Wire Science spoke. Data for a few states has been included, but their numbers make the rest of the missing data more important.

“When there is such a variation, I would say we need sub-national data,” Yogesh Jain, a physician in Chhattisgarh, told The Wire Science. Jain has written several papers on the subject of eliminating TB.

According to Jain, even the reasons for TB prevalence may differ. “There is a lot of TB in Kerala due to diabetes. It’s almost in epidemic proportions there. In Delhi, among migrants, or in  Chhattisgarh, undernutrition might be the underlying cause.”

No report could help with TB policymaking if it didn’t discuss the different causes of TB, according to him.

3. Performance mismatch – The report placed the prevalences of Kerala (149) and Gujarat (137) next to each other. However, the states have very different prevalence-to-notification ratios: 1:0.91 for Gujarat versus 3.33:1 for Kerala. This difference boggled Vijayan’s mind.

“We know TB is directly related to the quality of socioeconomic indicators of a state,” he said – meaning the ratios in the report don’t match with what we know about the relative well-being of the two states.

For example, in the NITI Aayog Sustainable Development Goals assessment, Kerala scored 88 and 83 on eliminating hunger and poverty while Gujarat scored 46 and 66, respectively (out of 100). Overall, Kerala ranked 1 on the index and Gujarat, 11. This performance is at odds with the new TB report, however.

“We really have to look beyond this report to understand what is happening in these states, which are next to each other in prevalence but differ so much otherwise,” Vijayan said.

4. Private facilities under the bus? – According to the report, the healthcare seeking behaviour vis-à-vis choosing a government versus a private facility for treatment was equipotent in Gujarat. In Madhya Pradesh, Himachal Pradesh and Uttarakhand, on the other hand, more people preferred private facilities.

On the face of it, it seems like private sector facilities are playing an equally important role as government ones.

One way to explain the discrepancy between the new TB report and notification data from the government portal is that while private facilities are charging patients and treating them for TB, they are not registering their patients in the national surveillance record.

In 2018, the Union health ministry mandated TB notification in both government and private facilities. Doctors who fail to do so are liable to be punished under Sections 269 and 270 of the Indian Penal Code. (The latter includes imprisonment of up to two years.)

5. Only one TB – Leena Menghaney, a public health lawyer with Médecins Sans Frontières, said the report was completely silent on co-infections – that is, about people who suffer from both TB and HIV/AIDS or both TB and diabetes. She said these people constitute “a very important cohort”.

Menghaney also said the report had hardly any information on extra-pulmonary TB – that is, tuberculosis infections of the brain, bones, intestines and other parts of the body.

“The [report] methodology said it looked for patients who had lesions in lungs or went through sputum tests only.”

Jain, in Chhattisgarh, also said the report wasn’t clear about whether the people who compiled checked the prevalence of these ‘other’ forms of TB. According to conservative estimates, he added, extra-pulmonary TB accounts for 30% of all those with TB in India.

“We know TB is a curable disease. Therefore, this high estimate, after so many years of a dedicated TB programme, is shocking and embarrassing,” the TB expert with the Union health ministry said.

The person also said a major bottleneck in reducing the number of TB deaths was that doctors in the country follow a not-so-standard treatment protocol even though the ministry has published one.

7. An underutilised solution – Vijayan, of PATH, said we will have to “retool” existing tools to eliminate TB in the foreseeable future.

“X-ray is an excellent tool that is under-utilised for TB detection, despite being a part of the diagnosis algorithm. If there is a case in a family, why do we have to wait for other members to cough and then offer [them] a lab test, which may not even be available in a village setting?” he asked. “But an X-ray is available. It can detect lesions in the lungs.”

These lesions can indicate TB – which can then be confirmed through a laboratory test.

This point finds mention in the TB prevalence survey as well, but nothing more. The survey report reads:

“We observed that 4,475 (1.8%) participants had chest X-ray abnormality suggestive of TB by at least two [experts], which was not microbiologically confirmed TB, and hence classified as clinically diagnosed TB. This is a higher percentage of chest X-ray abnormality, which indicates the importance of using chest X-ray examination in TB case detection activities.”

8. Overlooking food security – If a person is well-fed and exposed to the bacteria that cause TB, the infection may not break into a disease.

“This has been proven in several studies. But any government that thinks it could eliminate TB without providing food for all is clearly not thinking it through,” Jain said.

“We have been doing supply of drugs and diagnostics for TB for ages now. We have made progress but we are not where we wanted to be. All social sector departments have to come forward as [part of] next generation TB strategy, for any tangible achievement.”