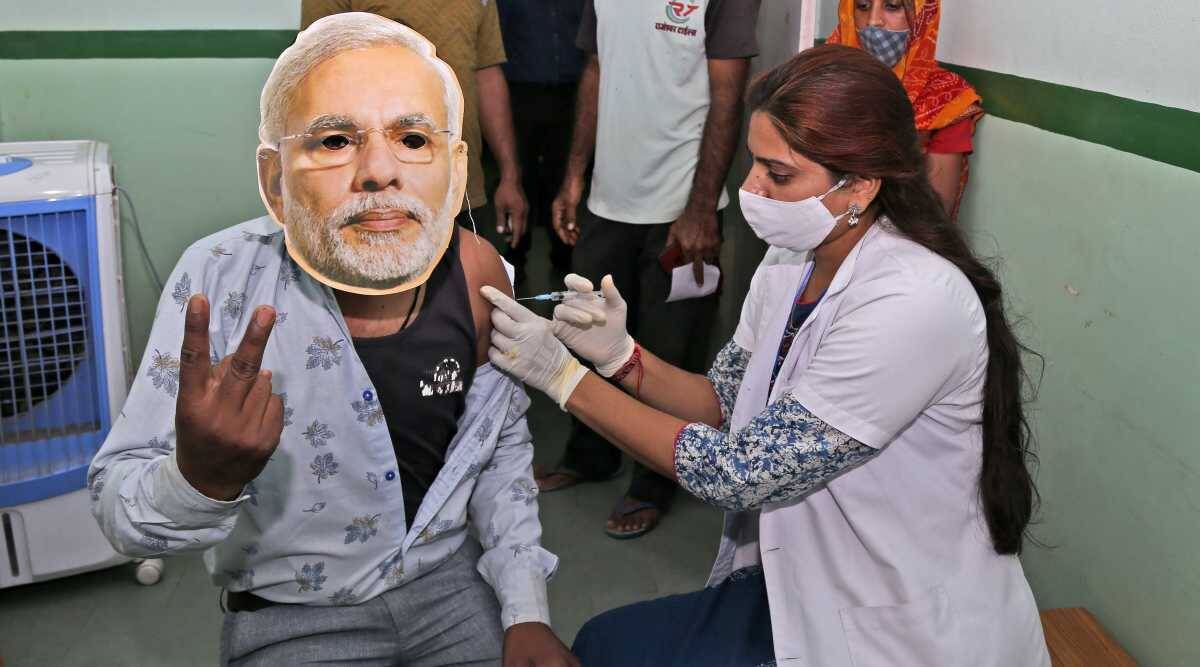 A health worker administers a COVID-19 vaccine dose to a beneficiary in a Modi mask in Beawar, Rajasthan, September 17, 2021. Photo: PTI

New Delhi: A report by The Caravan articulates claims that the ‘record’ number of COVID-19 vaccine doses administered on September 17, Prime Minister Narendra Modi’s birthday, was achieved through fraudulent means.

Reporters for the magazine quote people in different states saying either that they received vaccination certificates on September 17 despite having received the dose earlier or that they had received a certificate for their second dose that day but “without actually getting the shot”.

The former allegation had been investigated by Scroll. Specifically, it had reported that in Bihar, officials at several vaccination centres had vaccinated people on September 15 and 16 but had uploaded the data to the CoWIN portal only on September 17.

Data on CoWIN shows that on Modi’s birthday, the country administered more than 2.5 crore doses. In the seven days since September 17, however, the average number of doses administered daily plummeted to just over 76 lakh. This raised suspicions that either supply or demand – or both – were out of order on September 17.

According to The Caravan, Husain Baji received a vaccine certificate on September 17 without getting a shot. His certificate was issued by a vaccination centre in Dahod, his hometown in Gujarat. “What’s peculiar here,” Baij said, “is that my second dose happened in Vadodara but the certificate says it happened in my hometown Dahod. I wasn’t even there.”

He claimed at least seven or eight other people he knew were in the same situation.

Tushar Vaishnav and his wife, who live in Keshod, in the same state, received messages at 8 pm on September 17 saying they had been vaccinated with the second dose.

“Initially, I thought it must be a mistake but when I saw both our names on the certificate, I couldn’t make sense of anything,” Vaishnav told The Caravan. The certificate had been issued by a vaccination centre some 25 km from their house, implying it is too far away for them to have been vaccinated there.

Vaishnav told the magazine that he went to the centre on September 18 to confront the authorities. There were at least five other people at the centre with the same complaint.

He said that a nurse, the only one present there, refused to attend to their concerns. Instead, the nurse reportedly “asked them to sit and gave them vaccination without any entry or even looking at the Aadhaar card.”

I have not visited any vaccination center yesterday. How come i got this message without being vaccinated.. Today i have visited Mendarda CHC today for second dose of vaccine and inquired for the same and you can see what kind of irresponsible reply i received from the concerned

In another case, Raju Kumar, a resident of Hilsa in Bihar, received a call from a primary health centre on September 15 saying he could take his second dose anytime that week. But, according to The Caravan, at “around 3:30 pm on September 17, Kumar received a notification that he had been successfully vaccinated and could download his certificate.”

When a surprised Kumar called the centre, he was told to “keep quiet and come for vaccination whenever he wished to”.

The Caravan said however that it couldn’t track the vaccination centres down, nor have the Union health ministry respond to its questions.

Taken together, these reports suggest that in the pursuit of ‘records’, state officials – both at the Union and state-government levels – may have manipulated health data to appease the prime minister.

Similar single-day surges have been preceded and succeeded by an unusually low number of doses being administered – meaning doses had been hoarded to manufacture a ‘record’.

For example, on June 21, the ‘International Day of Yoga’, government officials administered a then-high 86 lakh doses across India. But subsequent reports found that BJP-ruled state governments had slowed the pace of vaccinations in the previous few days, resulting in an inevitable surge on June 21.

As unlikely as it is, in India, vaccination certificates have generally been controversial. In March 2021, for example, the country became perhaps the first in the world to print its leader’s photo on certificates, and on the CoWIN portal.