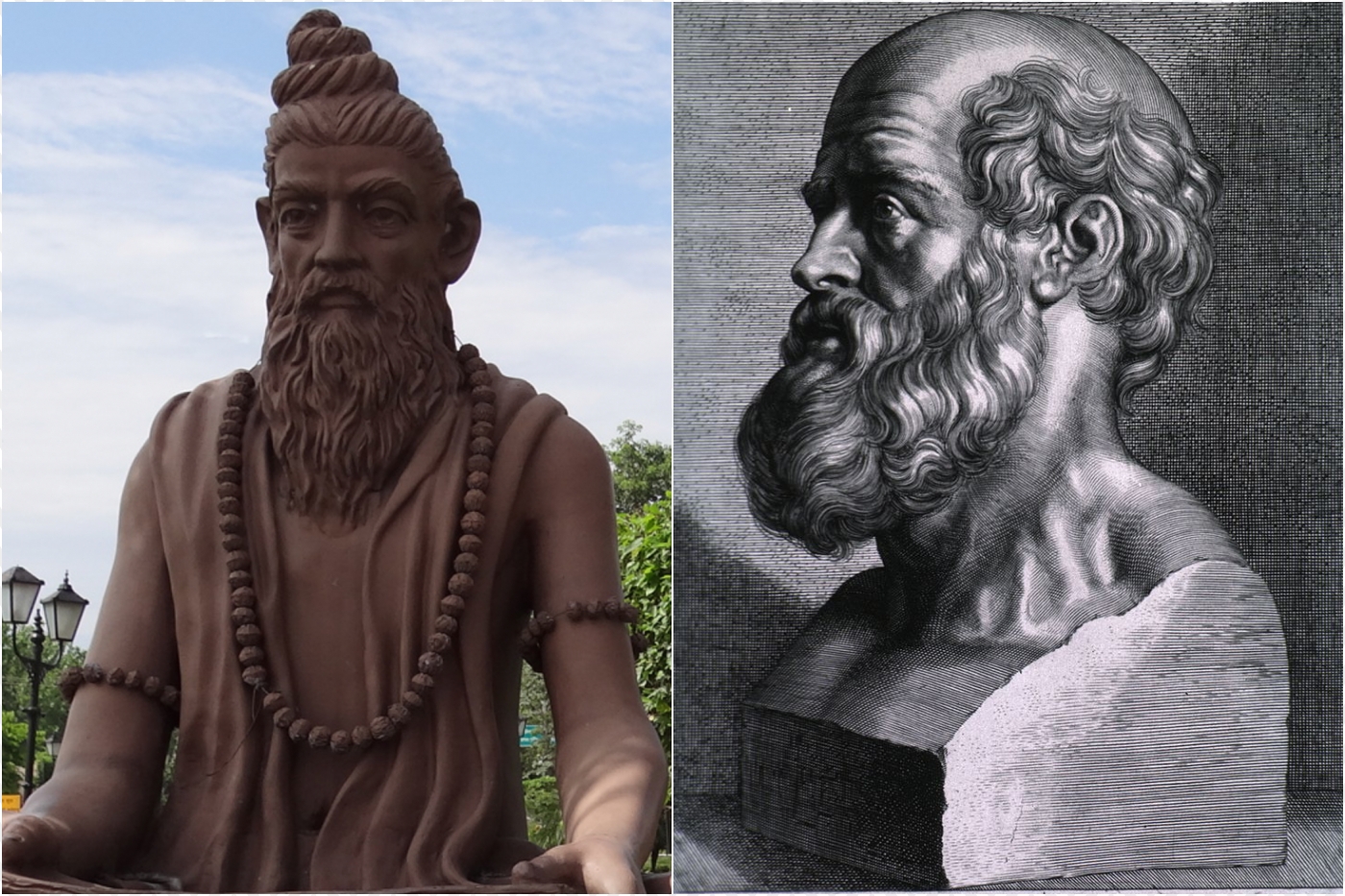 A statue of Charaka (left) and an engraving of Hippocrates. Photos: Alokprasad, CC BY-SA 3.0 and public domain

New Delhi: The name of the Greek physician Hippocrates may soon disappear from Indian doctors’ traditional oaths, at least if the National Medical Commission (NMC) has its way.

Specifically, the NMC has proposed to replace the Hippocratic oath with the ‘Charak Shapath’, a pledge mentioned in the Charaka Samhita, one of the two foundational Sanskrit texts of ancient Indian medicine.

Budding doctors take the Hippocratic oath during their “white coat ceremony”, named for the garb they receive when they enroll at medical colleges. With the oath, they commit to abide by medical ethics while serving their patients.

The NMC recently held a meeting with representatives of medical colleges around the country, with the MBBS course to take off from February 14. According to the minutes of this meeting, the NMC pitches for the ‘Charak Shapath’ to replace the Hippocratic oath.

The minutes also say the ‘shapath’ is available to read on the NMC website. The Wire Science couldn’t find it as of 2 pm on February 11, 2022.

Some unverified versions of the ‘shapath’ have been doing the rounds on social media platforms, however.

One of the codes of the ‘shapath’ is apparently that a male physician can’t treat a woman unless another male accompanies her. The Hippocratic oath doesn’t specify such things, although the norm in India is for a female healthcare provider to be present when a male doctor is treating a woman.

On February 11, Hindustan Times referred to another document of the NMC’s meeting, reporting that the body believes the Hippocratic oath will go away because “Charak belonged to our motherland – oath-taking to be conducted during white coat ceremony in local languages/vernaculars” (sic).

The minutes of the meeting also reportedly suggested that the training doctors will also have to undergo 10 days of yoga training.

One NMC member, Mahesh Verma, told The Print that replacing the Hippocratic oath with the ‘Charak Shapath’ is just a proposal. “It will have to come to the advisory council, of which I am also a member, and will have to be discussed and debated there before something like this can go ahead,” he said.

“Modern medicine does not have a history of more than 200 years,” Times of India quoted an unnamed NMC member saying. “Why should we continue to make doctors take [an] oath in the name of a Greek physician when we have a rich past in medicine?”

The Indian Medical Association (IMA) hasn’t yet formally responded to the NMC’s proposal. At the same time, IMA secretary Jayesh Lele told Times of India that he would not have an issue with the ‘Charak Shapath’ if it asked doctors to be ethical and to stick to the basic principles of modern medicine.

“As long as doctors are doing ethical practice, we should accept it. Let us accept the changing times,” Lele reportedly said.

Replacing the Hippocratic oath with the ‘Charak Shapath’ has been a longstanding demand of the Rashtriya Swayamsevak Sangh.

“It only makes sense for our country’s doctors to take an oath that had been propounded by the father of Indian medical science of Ayurveda,” Scoopwhoop quoted the general secretary of RSS’s medical wing, Prashant Chaudhary, as saying in 2017.

Unlike the ‘Charak Shapath’, and like the Hippocratic oath, the MCI declaration does not refer to any god or personality. Does the NMC think this is bad?