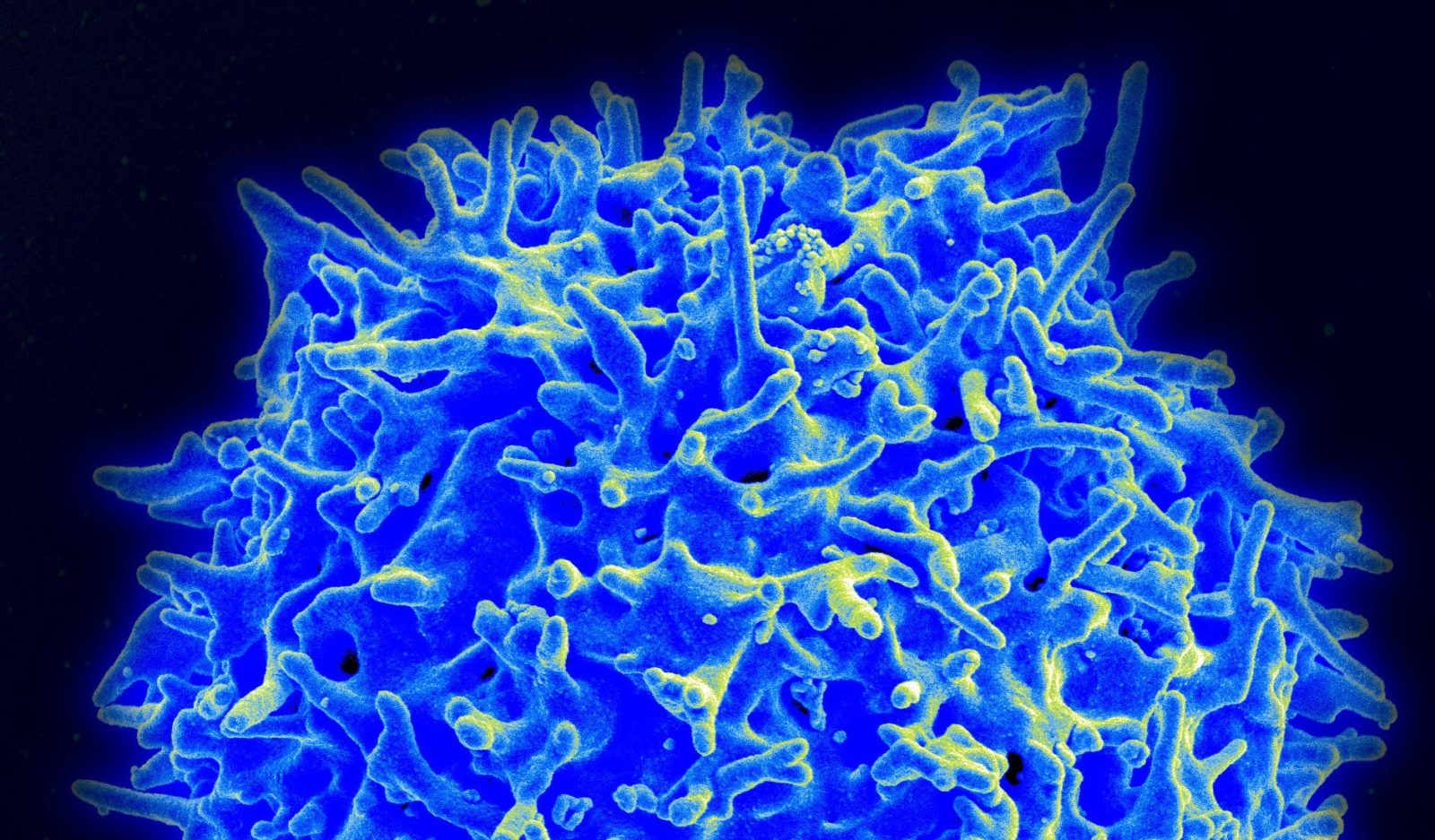 A scanning electron micrograph of a human T-cell from the immune system of a healthy donor. Image: NIAID/Flickr, CC BY 2.0

What is common to Denmark, Israel, Austria, France, Switzerland, the UK and the US? They all suffered an unprecedentedly severe wave of the omicron variant despite having some of the highest vaccination rates in the world. Most of these countries have already boosted significant sections of their population with a third dose of a COVID-19 vaccine as well.

Israel and Denmark have also been administering a fourth dose to some of their most vulnerable population groups. Israel also has a remarkably high-level of the virus in circulation, resulting in by far the highest number of cases per capita during its omicron wave, and set a seven-day new case record of ~11,000 per million people!

Most approved COVID-19 vaccines are based on the spike protein of SARS-CoV-2, the novel coronavirus. They have worked reasonably well so far. But the advent of the omicron variant, one of the most mutated strains of the SARS-CoV-2, has exposed the limitations of these vaccines – particularly their reduced ability to prevent infections and the onward transmission of the virus.

For this reason, many countries and regions have rushed to grant booster doses.

However, repeated vaccinations may be unsustainable. In Israel, the first country to launch the second booster dose, a.k.a. the fourth COVID-19 vaccine dose, the effectiveness of boosters has been found to be questionable, with one report (in The Lancet) saying that repeated boosters don’t work as intended.

There have also been concerns about the dangers of repeated boosters. According to one report of the European Medicines Agency, repeated booster doses every four months could eventually weaken the human immune response and tire people out – even as many countries are yet to complete their first rounds of vaccination.

This author had earlier raised two pertinent issues with boosting, related to the objectives of vaccination in a pandemic and specific the role of booster doses against COVID-19.

In the first case: though the prevention of severe disease and death has immense individual benefits, such prevention contributes little to the virus’s transmission through the population and thus ending the pandemic itself.

In the case of a pandemic of a new virus, vaccines should ideally be able to stop the virus’s ongoing transmission through a population. The current generation of COVID-19 vaccines doesn’t provide significant protection of this form. This is why we have intense viral transmission even in highly vaccinated countries, which flares further when a highly immune-evading variant shows up.

In the second case: if our objective is to prevent severe disease and death, then two doses of the current generation of COVID-19 may be able to do the trick. But if a vaccine is to prevent infection and symptomatic disease, we will need to administer booster doses, and often – which may not make for a prudent public health policy. The durability of protection following these repeated boosters may not be long-lasting either.

I have discussed these issues in this publication earlier, and the apprehensions therein are coming true.

A new study (which hasn’t been widely commented on) by researchers at Stanford University has raised a serious immunological issue that further enlarges the question mark over the utility of the current generation of vaccines.

The current vaccines were developed in 2020, when the original strain of the virus was spreading through the world. The very first of these strains is named Wuhan-Hu-1 – scientists first sequenced its genome on December 26, 2019. (The ‘Hu’ stands for ‘human’.)

Similarly, a recent Danish household study found that ‘boosted’ individuals were almost three-times more susceptible to being infected by the BA.2 sub-lineage of the omicron variant compared to the BA.1 – whereas the unvaccinated had only two-fold higher risk.

(In both cases, of course, unvaccinated individuals are more susceptible to severe disease.)

These findings are important because the current crop of vaccines and boosters are based on Wuhan-Hu-1-like antigens. The omicron variant’s spike protein is highly mutated, much more than that of other variants, compared to the Wuhan-Hu-1 spike protein. So no wonder vaccine manufacturers are now in the process of evaluating updated vaccines that encode sequences from the currently circulating omicron variant.

The Stanford study in particular means (a) it may be less rewarding to vaccinate individuals with vaccines based on the Wuhan-Hu-1 spike protein and (b) there may be an additional risk of non-updated vaccines generating a suboptimal immune response against the omicron variant.

The principal merit of the current COVID-19 vaccines is that they protect against severe disease, hospitalisation and death.

We know this protection is provided by our T cells – the last line of defence against an invading virus. But to generate adequate T-cell immunity, a person needs to have received at least two doses of a COVID-19 vaccine. We also know that even in the wave of the highly mutated omicron variant, our neutralising antibody responses have faltered but our T-cell responses have stayed up, and it cannot escape our T cells.

(Scientists have found that 80% of epitopes in the spike protein that our CD8+ T-cells recognise have not been affected by the mutations in the omicron variant.)

So a most dispassionate analysis would indicate that the current COVID-19 vaccines have been successful on two fronts: (1) protecting against severe disease, hospitalisation and death, and (2) offering stiff immune resistance to the mutating SARS-CoV-2 virus, which ultimately forced the virus to evolve immune evasion to gain higher transmissibility.

That is, in this process, the virus had to trade its virulence off to gain higher immune evasion, which resulted in the emergence of the omicron variant.

But this isn’t the end of the story. A recent UK health agency report on vaccine effectiveness against death vis-à-vis the omicron variant showed significant weakening of the protection afforded by two doses – to 59%. This rose to 95% after the third dose. The CDC and other US researchers have also reported similar waning in protection against severe disease and death.

That is, our T-cells are expected to kick in, recognise the omicron variant fairly well and take it down and prevent severe disease and death on-demand – more so than our neutralising antibodies.

But according to noted T-cell immunologist Anthony J. Leonardi, COVID-19 damages T-cells, potentially undermining not just COVID-19 immunity but also immunity against other diseases, and could result in autoimmune dysfunction post-COVID. Leonardi has also said much of the protection against COVID-19 is not through memory T-cells but through neutralising antibodies.

The underlying science is that the ORF8 gene of the SARS-CoV-2 virus suppresses the major histocompatibility complex – a set of genes that influence the immune response – which then prevents the activation of T-cells. This is a disturbing aspect of the whole pathogenesis of a COVID-19 infection. If our T-cells are not able to function properly, then our most robust defence against severe disease is demolished.

A recent study also indicated that T-cell reactivity to the omicron variant is preserved in most but not all individuals, and reduced by more than half in some 20% of individuals. Even booster doses weren’t able to restore this to 100%.

These findings signify that the omicron variant hasn’t only eroded our antibodies – induced by previous infection as well as vaccination – but has also dented our T-cell immunity.

What is the way out?

Taken together, while antigenic imprinting diminished our immunological response to variant virus epitopes, the omicron variant has rendered our current COVID-19 vaccines almost redundant. This is why, on January 11, the WHO urged vaccine developers to develop strain-specific vaccines.

The global agency has also established a ‘Technical Advisory Group on COVID-19 Vaccine Composition’ to review and assess the public health implications of emerging variants of concern on the performance of COVID-19 vaccines. So there is an urgent need to update our current COVID-19 vaccines. What are our options?

1) Continue boosting at regular intervals: Although boosters are proving a useful tool against the omicron variant, many believe endless boosting may not be a practical or a sustainable strategy. Protection from booster doses might be short-lived, in addition to keeping low-income nations from immunising their adult population once over.

2) Develop new vaccines: For new vaccines, we have two options – either variant-specific vaccines or a multi-antigenic ‘pan-coronavirus’ vaccine. A few companies have already started developing an ‘omicron-specific’ vaccine, but there is a concern that by the time such a shot is tested, the omicron variant may have been supplanted. This is why a ‘pan-coronavirus’ vaccine effective against current variants as well as future ones is a lucrative idea. But although researchers have made some progress on this front, it is time-consuming and success isn’t guaranteed.

3) Adopt a different vaccination strategy: Prime with a systemic (mRNA) vaccine and boost with a mucosal (intranasal) vaccine. This is an attractive approach: some researchers have shown that by using divergent spike proteins, a ‘prime and spike’ strategy could induce cross-reactive immunity against sarbecoviruses (SARS betocoronaviruses, including SARS and SARS-CoV-2) without invoking antigenic imprinting.

4) Animal adaptation of less pathogenic animal origin virus: This is a novel and exciting option. It presents the possibility of using animal-adapted variants – i.e. variants that have adapted to certain animals – to develop a multivalent SARS-CoV-2 vaccine. For example, a variant of the novel coronavirus that half-adapted to minks was barely able to spread among humans. A fully adapted variant probably wouldn’t have been able to spread among humans. So scientists can select such a weakly toxic variant and maintain and propagate in its host and in cultured cells.

In sum, to tackle this complex and unpredictable phase of the COVID-19 pandemic, the world’s priority should be to develop new vaccines.

The rise of SARS-CoV-2 variants and evidence of immunological interference (like antigenic imprinting and weakened T-cell immunity) in particular underscore the need for preemptive, next-generation vaccines that confer broad protection against coronavirus diseases.

The Wire Science@TheWireScience
4 Following 27.2K Followers
In Ever Green: Saving Big Forests to Save the Planet, the authors point out that boreal forests alone hold 1.8 tri… https://t.co/UNjU7HZkc1
10 hours ago
“We do assert that there has been no independent and transparent scientific scrutiny to date of the full scope of t… https://t.co/zCyklHcX2A
10 hours ago
Today, a chorus of scientific-sounding claims about “blue and pink” brains, testosterone and male primate aggressio… https://t.co/9HTFt260Is
17 hours ago
1
With the bitcoin price falling, the financial incentive to waste energy for mining bitcoin should be lower. In theo… https://t.co/4i1jyKv8NR
18 hours ago
3 5
The passionate argument of the authors of a new book is that our current strategies to mitigate global warming over… https://t.co/ZOOUxWbRtN
19 hours ago
1
India launched an adolescence education programme between 2003 and 2005, and implemented it in schools of the CBSE… https://t.co/sEmyD1zSjp
19 hours ago
2
Bitcoin has an annual carbon footprint of around 114 million tonnes – roughly comparable to 380,000 space rocket la… https://t.co/IcUUqx6mmu
2 days ago
1
The costliest harm from homeopathy arguably comes from the ways it causes adherents to delay proper medical diagnos… https://t.co/oQocgKvbIP
2 days ago
1 4
We all know a few of those lucky people who, somehow, have managed to avoid ever catching COVID. Perhaps you're one… https://t.co/crtxyJwzjF
2 days ago
1
Today, a chorus of scientific-sounding claims about "blue and pink" brains, testosterone and male primate aggressio… https://t.co/7GO44vszzk
2 days ago
1 1
In 2006, India launched adolescent reproductive sexual health, or ARSH, clinics to address sexual and reproductive… https://t.co/HFeYugJBQh
2 days ago
1
One theory around why certain people have avoided infection is that, although they are exposed to the virus, it fai… https://t.co/9f1J8inSwz
3 days ago
1 7
Women scientists are slowly shifting the "nature of gender relations": some become 'superwomen', others actively ch… https://t.co/cSyHaAvXl5
3 days ago
2
RT @1amnerd: Deep in the frozen ground of the north, a radioactive hazard has lain trapped for millennia. But UK scientist Paul Glover real…
3 days ago
10
Going carbon-neutral – a.k.a. net-zero – is the process of offsetting carbon emissions. You balance the amount of c… https://t.co/OYUYrv0KlQ
3 days ago
4 7
Contact us