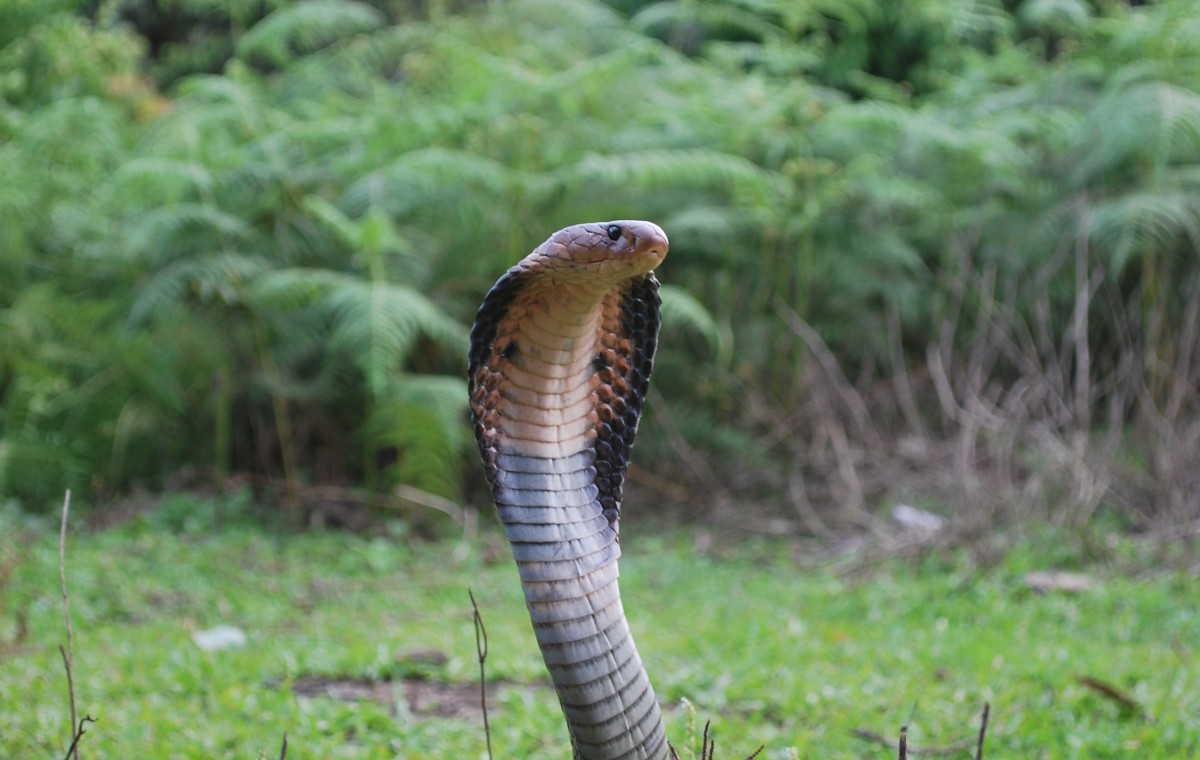 Kochi: Half of the world’s snakebite-caused deaths occur in India. More than 46,000 people die in this country every year, and three-times that number are permanently disabled by snakebites. India’s only cure is an anti-venom derived from the combined venom of four widely distributed snakes.

However, there could be several problems plaguing this life-saving drug, the results of a new study suggest.

Scientists screened snake venoms of six species and one subspecies and found that they varied drastically in composition and toxicity. Indeed, during preclinical analyses that included testing its effects on mice, the anti-venom couldn’t neutralise the venom of two regionally-distributed snakes known to cause grave injuries in west and east India. The anti-venom also failed to counter the venom of north Indian common kraits, one of the four widespread snakes whose venom’s effects it is supposed to work against.

These findings imply several issues with snakebite management in India, Robert Harrison, head of the Centre for Snakebite Research and Interventions at the Liverpool School of Tropical Medicine, said. He wasn’t involved in the study. “One problem may lie in the venoms used in anti-venom preparation,” he said. Another could be that all of India’s venoms are sourced from snakes in Tamil Nadu alone.

India’s anti-venom is derived from the venoms of four widespread species: the Russell’s viper, the saw-scaled viper, the spectacled cobra and the common krait, together known as the ‘Big Four’. Most private companies that manufacture anti-venom also source venoms exclusively from the Irula Cooperative, run by a group of traditional snake-catchers in Tamil Nadu. The Big Four’s venom from other states or regions are therefore not included in the process.

This is a problem. Studies now show that the venom of even a single species, such as the Russell’s viper in India, can drastically vary across locations due to geographical isolation. Moreover, more than 12 snake species can deliver venomous – even lethal – depending on where in the country they’re from.

In Kerala’s Thrissur district, for example, the bite of the hump-nosed pit viper, which can cause bleeding disorders, kidney failure and sometimes even death, is one of the most common, according to Dr Siju Abraham, a clinician who treats snakebite victims at the district’s Jubilee Mission Hospital and Research Centre.

“Anti-venom is ineffective for hump-nosed pit viper bites,” he told The Wire. “So all we can do is provide symptomatic and supportive treatment.”

How does India’s anti-venom fare against the venoms of snakes other than the Big Four? To find out, evolutionary biologist and toxicologist Kartik Sunagar and his colleagues a the Indian Institute of Science, Bengaluru, worked with herpetologists Romulus Whitaker (founder of the Madras Crocodile Bank Trust) and Gerard Martin (founder, The Gerry Martin Project). They studied the venoms of three of the Big Four, and four similar, closely-related snakes that are only regionally distributed: the monocled cobra (two populations from east and northeast India), the Sind and banded kraits of west and east India, and the Sochurek’s saw-scaled viper (a subspecies of the saw-scaled viper that dwells in west India’s dry desert tracts).

Whitaker and Martin identified these snakes – 45 individuals in all – in the field, caught them and extracted their venom following standards set by the WHO, and Sunagar and his team team conducted a series of tests to elicit each venom’s composition.

The results, published via a peer-review paper today, reveal that venoms across these species and subspecies are extremely diverse. For instance, while monocled cobras from West Bengal contained mostly neurotoxins, cytotoxins dominated the venom of the same species in Arunachal Pradesh. Ten comprehensive in vitro assays to test venom biochemistry, which specify the proteins and toxins in the venom that cause specific symptoms, such as blood coagulation, cell destruction and haemorrhages, also revealed hugely diverse venom functions across species and subspecies.

Also read: Snakes Have Become More Valuable to the Irula Alive Than Dead

An anti-venom works by binding itself to different venom components, such as proteins and toxins, and then negating their effects. Tests to study this binding ability of four brands of Indian anti-venom revealed that these drugs don’t bind efficiently to the venoms of the monocled cobra and the Sind and banded kraits. None of the four brands bound well to common krait venom – which is shocking because these anti-venoms are deliberately designed to bind to this venom.

To ascertain their findings, the team conducted WHO-recommended preclinical tests on live mice. Toxicity tests, which show how potent a venom is, during the course of this experiment offered curious insights.

“The Sind krait could be the most toxic snake in India right now,” Sunagar told The Wire.

About 0.1 mg of common krait venom (per kilogram of weight) could kill a mouse1. The Sind krait’s venom had the same effect at only 0.02 mg. According to the researchers’ paper, the latter could be one of the most potent mammal-targeted snake venoms in the world.

The sole anti-venom they tested in the mice neutralised the venoms of the spectacled cobra and the saw-scaled viper as expected, and that of the banded krait and Sochurek’s saw-scaled viper. However, it failed to act against the deadly effects of venoms from the Sind krait, the monocled cobra and the north Indian population of the common krait, nearly corroborating what the in vitro binding tests had showed.

“Our study also shows that the tested anti-venoms are very diluted,” Sunagar said. “They had nearly ten-times lower immunoglobulin content than some anti-venoms used in Africa. This [requires] using lots of vials, making treatment costly and increasing chances of severe allergic reactions. We need to look beyond the Big Four and improve our anti-venom.”

Many other issues plague India’s anti-venom. According to Whitaker, the ways in which the Irula Cooperative, which he helped set up, produce venom is “way out of date”.

“It does not follow the guidelines issued by the WHO and needs to be modernised,” he wrote in an email to The Wire. “Upgrading of venom production must be urgently initiated by the Commissionerate of Industries and Commerce, Government of Tamil Nadu, which is in charge of the Irula Snake-catchers Industrial Cooperative Society.”

Since several studies, including this one, attest that venoms in one region can differ significantly in terms of their toxicity, effects and composition from venoms from other regions, we need an anti-venom made using venom pooled from many different parts of our large country, Whitaker added.

However, Harrison signalled caution that Sunagar et al’s was a preclinical study. He’s also an expert advisor to the WHO’s guidelines for the Production, Control and Regulation of Snake Antivenom Immunoglobulins.

“What we need in India, and elsewhere, are extensive clinical trials to test the effectiveness of anti-venoms,” he said.

Also read: To Get Ahead on the Fight Against Snakebite, We Must See Beyond the Big Four

Effective treatment, together with access to them, is one way the WHO hopes to halve the numbers of deaths and disabilities due to snakebites around the world by 2030, at least according to an ambitious roadmap they released six months ago. For India, this would depend almost entirely on the Government of India and state governments taking this urgent and neglected matter seriously, Whitaker wrote.

“Especially since snakebites primarily affect poor, rural people who are mainly farmers,” he said. “Increasing awareness about snakes at the rural level is vital because snakebites are preventable accidents.”

It’s important to also remember that snakes in India are vital to the agro-ecosystem. “They prey on rodents that annually destroy an estimated Rs 90 crore of our grain production. And although over 300 species of snakes are seen in India, only 15 [have killed humans].”

The Wire Science@TheWireScience
3 Following 15.5K Followers
There is currently zero visibility of the Centre’s plans for vaccine procurement, even if it palmed off this respon… https://t.co/i1HEgm58Tv
11 hours ago
1 3
How our ancestors treated and mourned the dead can offer crucial clues, helping to reveal when we first developed t… https://t.co/nIjjB5fdlf
12 hours ago
3
The lands of Seppakkam once had rice fields, salt pans, fresh air, mangroves and clean rivers with fish aplenty. Th… https://t.co/Uw1BItkwlU
13 hours ago
2
In conversation with Karan Thapar, Professor Ashish Jha has said the Kumbh Mela "shahi snans", when two and three m… https://t.co/6BieQbnksr
14 hours ago
4
Big Pharma turns up once a public institute has completed the risky part, exploring the possibility of developing n… https://t.co/EuJ27p0Vzt
15 hours ago
“They have mild symptoms and they are eating well and they are fine,” Rakesh Mishra said. https://t.co/f1UT9sLcqe
16 hours ago
1 1
In a major shot in the arm for the Pfizer-BioNTech COVID-19 vaccine, researchers have reported in two studies that… https://t.co/sAYVSsy0Eg
17 hours ago
1
Ill-equipped hospitals, staff shortages and long journeys to dedicated COVID-19 wards are making it harder for vill… https://t.co/mVxL8vbdtL
18 hours ago
1
Do monopoly-protected, US-based Big Pharma endeavours have monopolies on finding the cures for many of the world’s… https://t.co/aSywMcxtVp
19 hours ago
1 1
President Joe Biden on Wednesday threw his support behind waiving intellectual property rights for COVID-19 vaccine… https://t.co/4hxFWH6sAz
20 hours ago
3
On May 6, India reported more than 400,000 coronavirus infections over the last 24 hours, while deaths rose by a re… https://t.co/iu0A7a5FgK
20 hours ago
1 3
The problem, according to Anvisa, is that doses of the Sputnik V vaccine may contain adenoviruses that are able to… https://t.co/1ykUG1cSIf
22 hours ago
1
A study led by Centre for Cellular and Molecular Biology, Hyderabad scientists states that there is no separate spe… https://t.co/uV0xemWT7G
23 hours ago
2
Oxygen crisis deepened in certain parts of Karnataka on Tuesday, with the deaths of seven COVID patients in Kalabur… https://t.co/KXxGpchp2i
1 day ago
1 2
The striking disparity between COVID-19 advice and treatment is attributable primarily to India’s sluggish treatmen… https://t.co/KLMRs8AgUM
1 day ago
2 2
Contact us