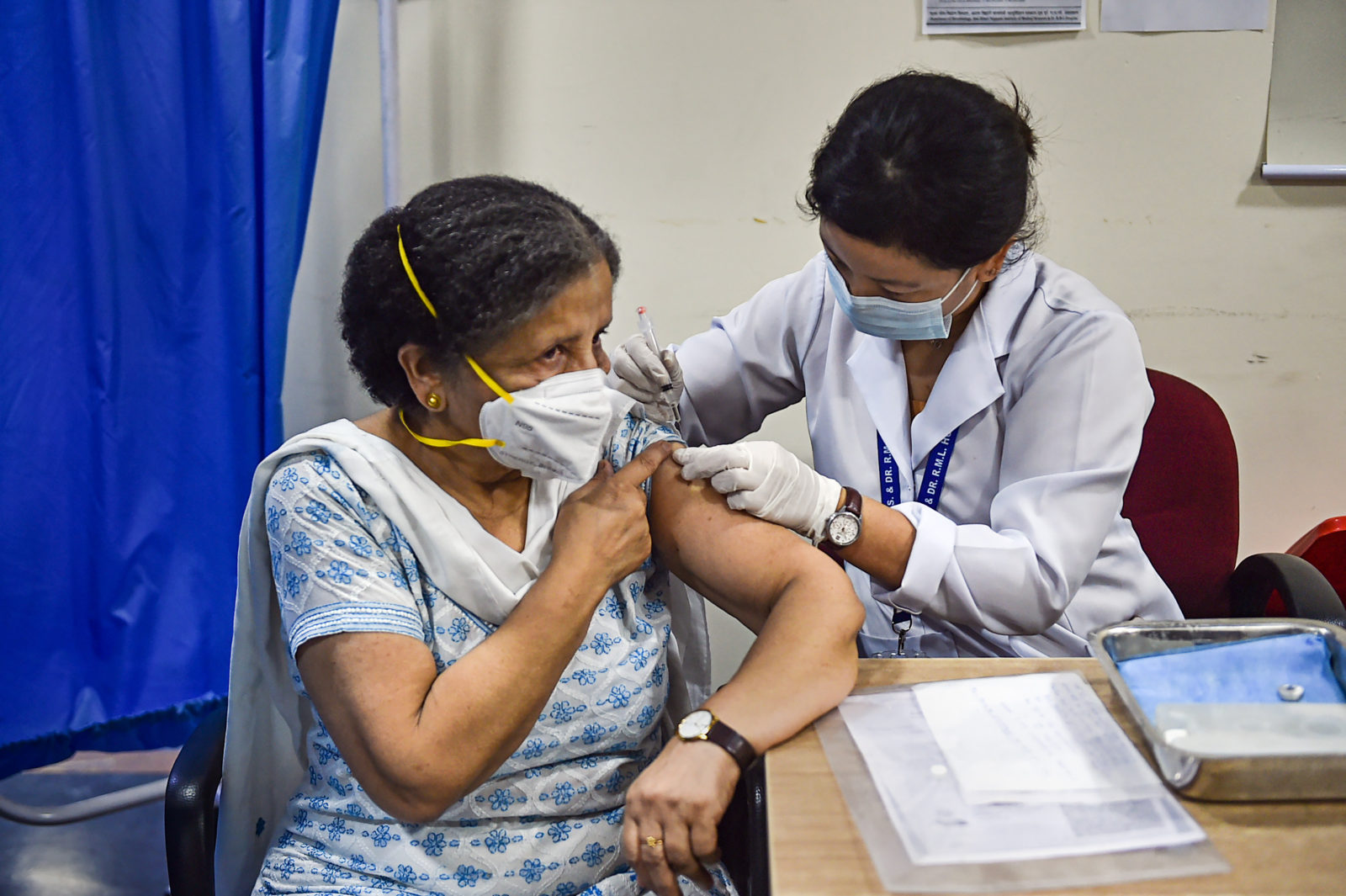 A health worker administers a dose of a COVID-19 vaccine to an elderly woman, RML Hospital, New Delhi, May 02, 2022. Photo: PTI/Arun Sharma

New Delhi: On May 2, the Supreme Court of India passed an order saying that COVID-19 vaccination couldn’t be made mandatory in the country.

While this important statement hogged the headlines, some of the Union government’s responses to the petition that prompted the order, running into 115 pages, include lies that undermine confidence in its management of India’s COVID-19 vaccine drive.

The petitioner, Jacob Puliyel, a paediatrician and former member of the National Technical Advisory Group on Immunisation (NTAGI), had contended, among other things, that the government’s decisions to approve various vaccines hadn’t been transparent and that “relevant data is not always placed before” NTAGI.

In his petition, Puliyel had cited the example of The Wire Science’s 1 report on Corbevax that revealed that the government had cleared the vaccine’s use among those aged 12-14 years without the NTAGI’s approval. The Wire Science’s report had included comments from an extant NTAGI member, Jayaprakash Muliyil, to this effect.

The NTAGI is a body of independent experts and government officials that reviews the Drug Controller General of India’s decisions on vaccine approvals. As such, it is an important part of the bureaucratic apparatus that leads India’s COVID-19 response.

However, the Indian government claimed to the Supreme Court that all vaccines had been approved by NTAGI. Its representative also said that the “detailed” minutes of the NTAGI’s meetings had been published on the websites of the Union health ministry and the Indian Council of Medical Research (ICMR).

On both counts, the government lied.

Second, both Muliyil and another NTAGI member also confirmed that the body’s top-most panel (in a three-tier setup) had not approved the use of Corbevax among children.

However, the Supreme Court, going by the government’s contention that NTAGI had recommended Corbevax, refused to take The Wire Science’s report on the record. Instead, the order read:

“It is settled law that courts cannot take judicial notice of facts stated in a news item published in a newspaper. A statement of fact contained in a newspaper is merely hearsay and therefore, inadmissible in evidence, unless proved by the maker of the statement appearing in court and deposing to have perceived the fact reported. In the absence of anything on record in the present case to substantiate the statement made by Mr Jayaprakash Muliyil, member of the NTAGI, we are not inclined to take judicial notice of the news article reported in The Wire…”

The apex court also said that “in light of the affidavit filed on behalf of the Union of India stating that the relevant data was examined by the expert bodies at all stages before granting emergency use approval to the vaccines”, it was not “inclined to take judicial notice of the news article reported in The Wire.”

Puliyel, the petitioner, also contended in court that the system for ‘adverse events following immunisation’ (AEFIs) has been dysfunctional in the case of COVID-19 vaccination in India. He called it non-transparent because “investigation done to know the cause of deaths following vaccination was obscure”.

An AEFI is any adverse side-effect arising from taking the vaccine and which the vaccine may or may not have caused.

However, the court didn’t accept what it called Puliyel’s “broad-strokes challenge” to the AEFI system.

Nonetheless, it instructed the Union government to ensure that a vaccine recipient could go to any private practitioner to report an AEFI.

Currently, it is only possible to report an AEFI through a helpline number provided on the CoWIN portal (see screenshot below). If a vaccinator or district immunisation officer learns of an AEFI, she can also report it through CoWIN. In this milieu, the court has asked the government to create a “virtual mechanism” in which any private doctor and an individual could also report it.

Not every AEFI is linked to vaccines. Once an individual has reported a potential AEFI, a district-level committee assesses whether the individual’s complaints could have been caused by the vaccine. Separate state-level and national committees also conduct similar assessments, in that order.

According to Puliyel, there has been little to no information about these assessments in the public domain.

In response, the government claimed in the court that after it had administered 119.38 crore doses of COVID-19 vaccines, until November 24, 2021, it had recorded 2,116 severe AEFIs. It also said that the Union health ministry website “carries the results of causality assessment of AEFI cases, from which the public can obtain relevant information pertaining to AEFIs”, according to the court’s order.

This is not true. There has been no such information on the Union health ministry website (as of May 5, 7:30 am).

Wrong information in sworn affidavits misleads the court and prevents it from questioning those involved, and perhaps even taking corrective action. For example, if it had been ascertained to the court that NTAGI did not in fact approve Corbevax, it could have demanded an explanation for the government’s decision to approve the shot anyway for children.

Ultimately, what hangs in the balance is the safe protection of a very large population from a viral infection on one hand and misgovernment on the other.

Third, the court refused to entertain Puliyel’s request that the primary data from the clinical trials of COVID-19 vaccines be placed in the public domain because doing so would violate the privacy of the trials’ participants. Instead, the court said it was satisfied with the scientific papers of the trials that had been published.

However, a lawyer and a member of the ethics committees of various medical research institutions told The Wire Science that “there is no harm in disclosing the primary data. As far as confidentiality of the participants is concerned, it can always be protected by simply anonymising the data.”

The primary data refers to a clinical trial’s raw data. Papers published by the trial investigators contain the analyses of this data.

According to her (she wished to remain unnamed to protect her position on the committees), countries around the world are tending towards releasing the primary data “in the interest of better research. And it should be put in the public domain.”

Sharing the primary data will allow other researchers to analyse the trial data on their own.

This said, the court also asked the government to release the data from “post-marketing” trials – i.e. trials conducted after a vaccine’s real-world use – of Covishield and Covaxin “without undue delay”.