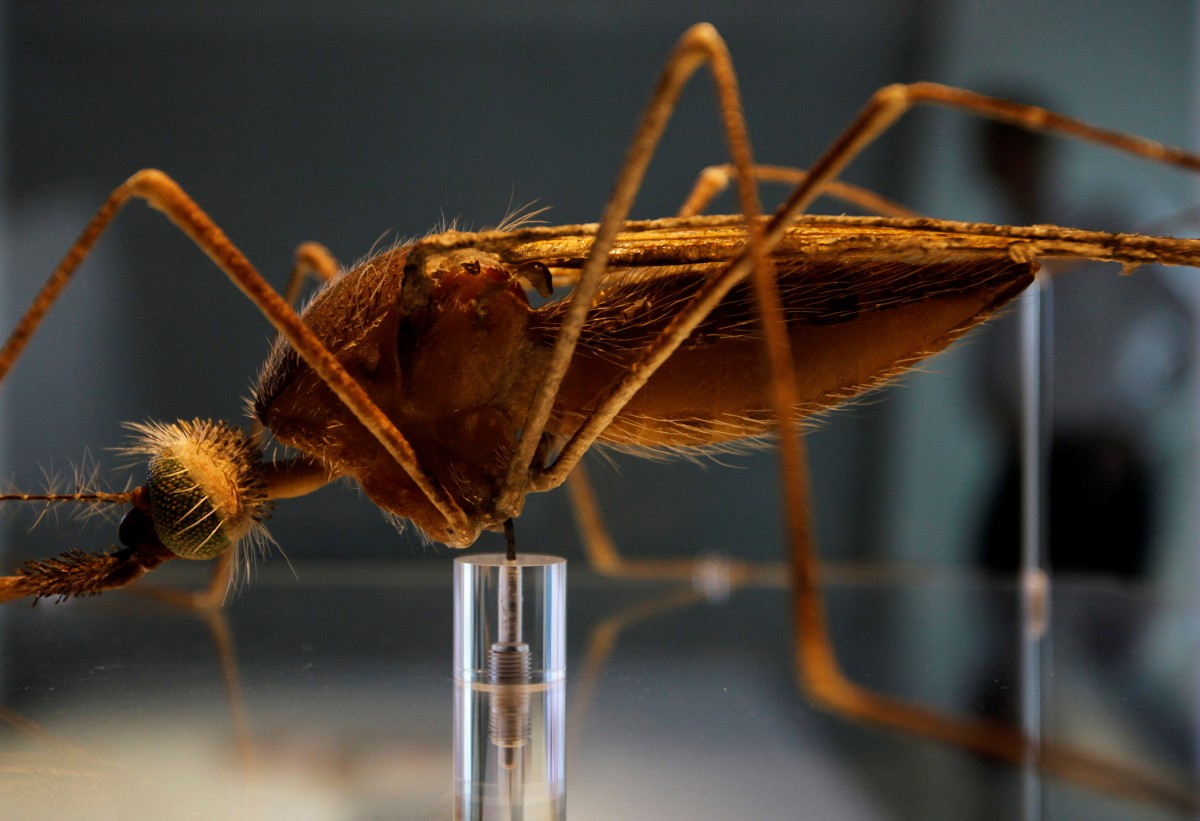 The Omicron Variant and Patent Waivers for COVID-19 Vaccines

A model of an Anopheles mosquito at the Natural History Museum, in London, September 2009. Credit: Reuters/Stefan Wermuth/File Photo

New Delhi: Disruptions due to the COVID-19 pandemic resulted in the highest increases in malaria cases and deaths worldwide in 2020 compared to the three years prior.

According to the 2021 ‘World Malaria Report’, released by the WHO on December 6, an estimated 241 million people had malaria and 627,000 people died of it in that year. This represented an increase of about 14 million cases and 69,000 deaths over the tallies for 2019.

Approximately two thirds of the ‘additional’ deaths in 2020 – some 47,000 – were linked to disruptions in the provision of malaria prevention, diagnosis and treatment during the pandemic, according to the WHO.

Though the increase in cases and deaths in the pandemic year has been the highest compared to the previous three, the WHO also said it was better than the worse-case scenario. WHO experts had conducted a modelling exercise four months after the world’s first COVID-19 outbreak that projected that the deaths could as much as double in 2020.

The COVID-19 pandemic didn’t only setback our efforts against malaria. An international report released in October this year found that a higher number of deaths due to tuberculosis had pushed back the world’s efforts no less than eight years. A WHO-UNICEF report on childhood immunisation released in July this year found that the most children missed out on vaccines in 2020 since 2009.

Southeast Asia accounted for 2% of all cases. Within this region, 83% of cases were reported from India in 2020. But overall, in this WHO region of 10 countries other than India, there was no major increase in cases the same year.

Also read: How Deforestation Influences the Risk of Malaria

Malaria in pregnant women is also a major concern because it increases the incidence of low birthweight children. As many as 78% pregnancies in Eastern and Southern Africa and 60% in West Africa were accompanied with a malaria infection, the report added. Intermittent preventive therapy for pregnant women can help reduce this burden, and if its coverage encompassed 90% of all pregnancies, more than 400,000 low-birthweight births could have been averted in Africa in 2020, WHO said, citing its own and Imperial College London’s estimates.

While our battle against malaria is going downhill, there is little confusion about the causes and services that were disrupted, leading to this outcome.

And until October 2021, Cambodia, the Central African Republic, Chad, India, Malawi, Pakistan, Solomon Islands and Zimbabwe had distributed none of the nets targeted for this year, according to the WHO report.

On the other hand, in Zambia and Burkina Faso, the number of tests went up by 30-40%.

The WHO report is also careful to highlight an emerging challenge on this front. Rapid tests to diagnose malaria will be rendered useless if two genes are deleted from the genome from the mutating malaria parasite – and there aren’t many feasible alternatives to these tests. The WHO has already asked countries reporting false negative tests to conduct representative baseline surveys first, to understand the extent of the problem.

Clinical researchers have also been aware of drug-resistant malaria for some time now. “The emergence of resistance to artemisinin and partner drugs is a significant risk for the global effort to reduce the malaria burden,” the report warns.

In the report, the WHO writes that, in India, a combination of artesunate plus sulphadoxine-pyrimethamine is usually prescribed to treat malaria – but in Chhattisgarh – one of the country’s high-malaria-burden states – studies have shown resistance to the latter compound.

Insecticide resistance is a similar cause for worry. “Globally, resistance to pyrethroids – the primary insecticide class currently used in nets – is widespread, being detected in at least one malaria vector in 68% of the sites for which data were available,” the report says.

While there were a glut of setbacks, there were two big positives as well. The WHO classified China and El Salvador to be ‘malaria-free’ in 2020. These countries reported zero cases in three consecutive years to get their certification. Together with them, 23 countries in the world have this status.

The WHO has said before, and repeated that in the report, that there is no one-size formula for other countries and that they must devise their own strategies.

The other major achievement in the world’s decades-long fight against malaria happened when the WHO approved the first vaccine against the disease in October this year, after 30 years of study and tests. ‘Mosquirix’ is the first vaccine against any parasite, and saves one life for every 200 children vaccinated. Many children also suffer from repeated episodes of malaria in a single year, and Mosquirix promises to reduce such recurrence by 40%.

Its supply is currently limited, in fact restricted to three African nations, where the WHO introduced it as a pilot project in 2016. The WHO said it anticipates more regular supply from 2022, and has also spelled out the need for $8.5 billion for further R&D from 2021 to 2030. It has called upon countries and global partners to contribute their share every year to make Mosquirix better and more widely available.