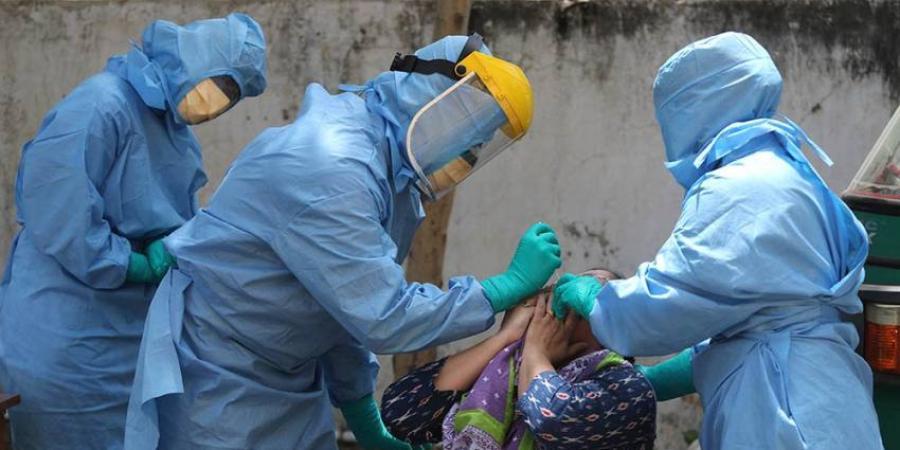 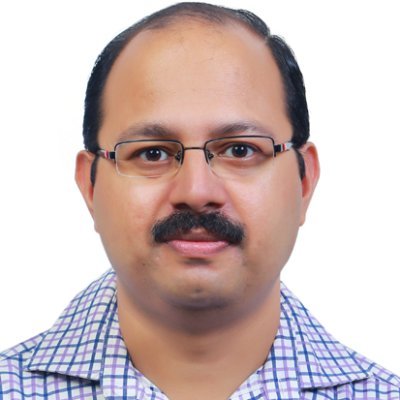 With a Third Wave on the Horizon, a Closer Look at Kolkata’s Vaccination Coverage

Representative image of a medic administering a swab test for COVID-19. Photo: PTI

The eyes of many experts and non-experts alike are currently on Kerala, as its COVID-19 case load has been increasing in increments far greater than any other state in India. The average number of daily new cases reached a low of 11,000 around the last week of June, 2021, and it has since been rising, albeit slowly, over the past two weeks. At the same time, the number of cases elsewhere in the country has been falling after a major second-wave peak in the first week of May.

The average daily new cases is currently at about 16,000, and Kerala currently accounts for close to 35% of all active cases in the country. Needless to say, the dominant narrative in the public discourse is that Kerala has failed to contain its COVID-19 epidemic.

But is this narrative true? Let us take a dive into the official COVID-19 data of Kerala and of India to check if there is any merit in the argument.

It’s important to understand that the number of reported infections on any day depends on the effectiveness of surveillance, through tracking, tracing and testing. As there is a huge variability in these factors across different states, it would be unfair to make a straightforward comparison of reported cases in each state, or that of Kerala, against India.

One way to assess the extent of infection spread in a population is to check for the presence of antibodies against the virus through seroprevalence surveys. The Indian Council of Medical Research (ICMR) has thus far performed four nationwide seroprevalence surveys at different intervals over the course of the pandemic. The preliminary results from the fourth round of the survey – the latest – indicate that the seroprevalence for all of India is 67.6% while that of Kerala is 42.7% – a difference of 25 percentage points. In fact, one can see that the seroprevalence has consistently been far lower in Kerala compared to the national average over all four surveys. 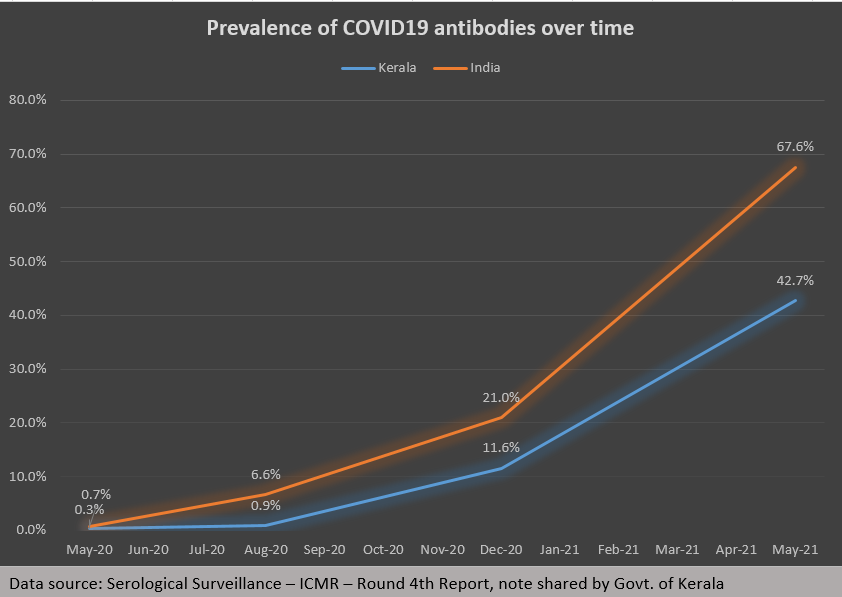 Since the survey sample included both vaccinated and unvaccinated persons, some of these antibody prevalence could also be attributed to vaccine induced antibodies. In fact, at the national level, the seroprevalence only among the unvaccinated was estimated at 62.3%. At the time of completion of the survey in May 20201, about 12% population at the national level and 20% population in Kerala had received at least a single dose of vaccine. Unfortunately, the data on sero-prevalence among unvaccinated persons alone is not available in the public domain for Kerala at the time of writing this. So, I use the overall seroprevalence to estimate the extent of under-counting of COVID-19 cases in Kerala and India.

Assuming that the sero prevalence survey reasonably approximates the true extent of the spread of cases in a given population, we can compare the estimated cases against the actual reported cases for both Kerala and India. We can see that the testing strategy Kerala has used was able to detect one in every six cases while the same at the national level was one in 33 cases. Given that the vaccination rate was higher in Kerala at the time of the fourth survey, it is possible that this under-counting factor may be slightly overestimated for Kerala compared to India.

However, using the third ICMR survey results (there were no vaccinations at the time) the under-counting factor was 5.4 and 28 for Kerala and India, respectively. So it is reasonable to say that Kerala’s tracking and tracing system along with its testing strategy has been able to identify at least one out of every six cases – while at the national level, only about one in 30 cases were detected. Clearly, a better rate of detection of cases is a result of better and more efficient surveillance.

It is understood that testing after better tracing and tracking would make the process more effective. Targeted testing may result in a higher test positivity rate (TPR), but it is also cost-effective use of testing infrastructure. Kerala has not only conducted more than double the number of tests per million as the national average, it also has a much better case detection rate.

Thus far, Kerala’s tests have detected 9.2% of its population as being COVID-positive, while India did 2.3%. The total testing per million population in Kerala so far has been 2.2-times the national average. It may be also noted that only about 35% of the total tests done in Kerala thus far has been RT-PCR, while the same number is about 48% in India.

Also read: India’s COVID-19 Death Reporting is Broken But Here’s How to Fix It

Irrespective of the test type used, however, it is evident that Kerala’s testing strategy has so far been more effective compared to the national average in detecting a higher proportion of cases. The state has also fully vaccinated 16% of its population while India has vaccinated 6.8%.

Then why are the COVID-19 case numbers in Kerala still not falling? The simple answer is that : Kerala still has a larger fraction of population that is unexposed to the virus, compared to all of India. While Kerala has about 50% of its population still susceptible to the novel coronavirus, the same is only about 30% in India. Clearly, the vulnerable population as a percentage of the total population is much higher in Kerala. This is despite the fact that the very first COVID-19 case in India was reported from Kerala.

One is forced to infer that the spread of the virus has been much slower in Kerala compared to the rest of India. A combination of containment strategies and a relatively better adherence to COVID-appropriate behaviour among the general public may have been the major factors behind it.

One could argue that this is the idea of ‘flattening the curve’: keep the cases at a low, manageable level for the healthcare system for as long as possible until the infection reaches the herd-immunity threshold. When the number of cases suddenly spikes, the healthcare system may become overwhelmed, leading to too many missed cases and deaths.

This is, in fact, evident from the recent estimates for excess deaths across different states. An article by data journalist Rukmini Shrinivasan shows the extent of under-reporting of COVID-19 deaths – and that the under-reporting of deaths, although a concern, is arguably the lowest in Kerala. In other words, one must presume that a slower spread might have played a part in not stressing the state’s healthcare system, which in turn might have resulted in fewer deaths compared to other factors that potentially impact COVID-related deaths.

The delayed spread also provides ample time to vaccinate the remaining population – a task the state is doing far better than the national average.

There is also a widespread misperception that Kerala was one of the states that started the second wave of India’s COVID-19 epidemic. It is not true. The second wave had started surging in Kerala more than a month after it had already started in a number of states in India. So, from that perspective too, it is not unusual that a flattening occurs later than in the rest of the country.

The current level of infections, at under 20,000 daily new cases, is well within the capacity of Kerala’s healthcare infrastructure to manage comfortably. While that provides the inadvertent impression that the state is unable to contain the epidemic, a slower spread imposes lower stress on the public healthcare system and improves the chances of saving each life.

Unfortunately, in India, we have a system that rewards success based on officially reported numbers on paper. This incentivises many states to “manage” the pandemic data more than the pandemic itself, with the consequence of ever increasing ‘missing’ deaths and human misery. This is reflected in the fact that the seroprevalence surveys capture a much higher rate of infection at the national level than what the reported deaths justify.

Presumably, a large number of COVID-attributable deaths have gone missing in many states due to this, and as evidenced by several studies from both within and outside of India.

Kerala had its own share of failure while managing its epidemic, as no state or country is perfect. However, it is clear that the state’s healthcare infrastructure has never collapsed at any time during the crisis and that it has been able to keep the deaths relatively low, too. Given the sustained high TPR, the state needs to increase its daily testing even more and rationalise its lockdown policies in consultation with experts. It also needs to improve reconciling the reporting of COVID-19 deaths as there are perceived discrepancies across districts.

To answer the original question in this article; Kerala has not failed in containing the pandemic. If anything, the state has done a reasonably good job of managing it and its healthcare system is reasonably well-placed to manage future waves of COVID-19 as well. But such waves are expected to not be as severe as the second one was, given the pace at which Kerala is vaccinating its population.

This article explains why the number of cases in Kerala is still not falling while it has fallen in much of the rest of the country. Today, the state reported 17,466 new cases, but the TPR has reduced due to increased testing, at around 1.4 lakh.

Rijo M. John is a health economist and an adjunct professor at the Rajagiri College of Social Sciences, Kochi. He regularly analyses India’s COVID19 data at @RijoMJohn.