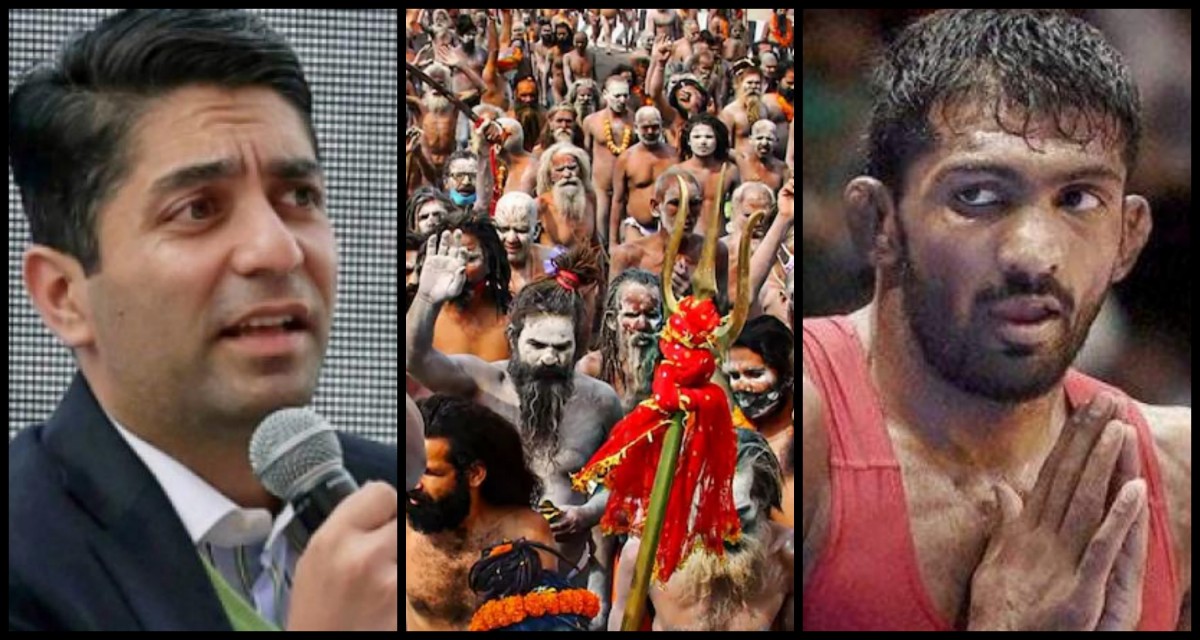 New Delhi: On a day that India added 260,533 new COVID-19 cases and 1,492 deaths to its mounting tally, the country’s only individual Olympic gold-medallist, shooter Abhinav Bindra, questioned the decision to continue with the Haridwar Kumbh Mela, saying ‘a virus does not discriminate between religions’.

The Kumbh Mela is being seen as a potential super-spreader with lakhs of devotees converging at Haridwar for a dip in the Ganga river. Official figures for the period between April 10 to 14 placed the number of infected persons at 1,701.

Bindra asked on Twitter whether the Kumbh should “even be held while an infectious pandemic lays waste to India”, adding, “A virus does not discriminate between religions.”

Should the Khumb mela even be held while an infectious pandemic lays waste to india? A virus does not discriminate between religions.

He was responding to a tweet by the wrestler Yogeshwar Dutt, who is now a member of the Bharatiya Janata Party.

Dutt, who had won the bronze in the 60kg freestyle category at the 2012 London Olympics, had recently tweeted a defence of the event in the face of mounting criticism that the government had grievously erred by allowing the Kumbh to take place despite the dramatic surge in coronavirus infections across India.

Dutt claimed that the “peaceful devotess” were being defamed and that they “are following all protocols”.

He also said, “no one is spitting at the security and medical staff, no one is running away after hiding from the administration,’ he had tweeted.

In keeping with the BJP’s attempt to reject any comparison between the Kumbh Mela and the Tablighi Jamaat event in Delhi last March – which was labelled a coronavirus hotspot after a number of cases were detected there – Dutt’s tweet recycled some of the myths peddled on social media by right wing handles and pro-government media at the height of the hysteria against the Jamaat.

As for  his claim that protocols are being followed, journalists in Haridwar have documented the virtual absence of masks and the collapse of official measures supposedly put in place to ensure only those with a negative Covid test came to the Kumbh.

In his response to Dutt’s tweet , Bindra went on to criticise the wrestler for lending his support to the conduct of the massive gathering.

‘Athletes r known to keep their eye on the ball,their focus unwavering & to not get distracted by wht is most important at this time — saving lives,finding cures THAT can work & showing compassion & empathy 4 those who r loosing loved ones. U r failing the entire sports community with this,’ the celebrated shooter posted.

Athletes r knownto keep their eye on the ball,their focus unwavering &to not get distracted by wht is most important at this time-saving lives,finding curesTHAT can work &showing compassion &empathy4those who r loosing loved ones.U r failing the entire sports community with this

Dutt’s defence of the Kumbh came even as Prime Minister Narendra Modi – whose government has exhorted pilgrims to attend the event through advertisements – finally did a U-turn of sorts, saying that attendance at the Hindu festival should be ‘symbolic‘. Following his appeal, Swami Avdheshanand of the Juna Akhara in Haridwar appealed to devotees that keeping in mind the COVID-19 situation, they should refrain from refrain from taking the holy dip in large numbers and abide by all protocols:

Modi and Avdheshanand’s appeal comes in the wake of the mahamandaleshwar of the Maha Nirvani Akhara from Madhya Pradesh, Swami Kapil Dev, succumbing to  COVID-19 on April 13. The president of the Akhil Bharatiya Akhara Parishad, Mahant Narendra Giri has been admitted to AIIMS, Rishikesh after testing positive for the disease last week.

Uttarakhand chief minister Tirath Singh Rawat, who had said faith and ‘Maa Ganga’ would protect the pilgrims at Haridwar from the coronavirus, has himself now tested positive for COVID.

With inputs from PTI

The Wire Science@TheWireScience
3 Following 15.5K Followers
Citizen science involves large numbers of “ordinary” people participating to collect huge amounts of data – somethi… https://t.co/BLrSP0liUp
18 hours ago
2 2
Rocky outcrops are a type of small natural feature: spatially diminutive natural entities with highly variable envi… https://t.co/ajVtewY9P3
19 hours ago
1 1
There is little doubt that the Government of India is making cynical use of its COVID-19 epidemic to promote Ayurve… https://t.co/ZwiMUn59Lk
20 hours ago
2
It is only through a combination of proactive release of information by public authorities and responsible journali… https://t.co/CfQLdVmYKc
21 hours ago
1
The pursuit of human metrics has a rich and fascinating history, dating back to the ancient Greeks, who viewed prop… https://t.co/besF2H8VpV
22 hours ago
1 3
The COVID-19 pandemic has disrupted lives the world over for more than a year. Its death toll will soon reach three… https://t.co/nPjA5OAetX
23 hours ago
4 6
The World Health Organisation said the coronavirus variant first identified in the country last year was being clas… https://t.co/3cRL2FTC1l
24 hours ago
1 2
India’s Forest Rights Act 2006 (FRA) is perhaps the first law in the world to outright discard state-led fortress c… https://t.co/woxIP9RkI7
1 day ago
2 5
Delhi government hospitals had oxygen supply left for 11 hours and 4 minutes on average whereas Central government… https://t.co/gtRWu1PBWM
1 day ago
2
While others arranged for the transfer of convalescent, public health experts have been becoming more concerned abo… https://t.co/uwDcSYSA9J
1 day ago
1
Doctors in India are warning against the practice of using cow dung in the belief it will ward off COVID-19, saying… https://t.co/rY8H5LwKFQ
1 day ago
6
Denning called it a “triple whammy”. “You’ve got a high rate of mucormycosis, you’ve got a lot of steroids – maybe… https://t.co/endwnuZlIa
1 day ago
2 3
Although there is no evidence to suggest these drugs – especially remdesivir, which is one of the most widely used… https://t.co/RbnJDzION0
1 day ago
1 2
In New Delhi today, each individual loss, each burning pyre is an unspeakable, yet screeching horror. It is testing… https://t.co/ctedUgFN9M
2 days ago
Journalist @rkarnad speaks to Usha Krishna Kumar, president of the Nurses‘ Welfare Association of India, to learn a… https://t.co/2qQqE6RnI6
2 days ago
4 6
Contact us

India COVID: WHO Calls B.1.617 a ‘Variant of Global Concern’