New Delhi: The Supreme Court on Wednesday issued interim directions asking government and private labs to conduct COVID-19 tests free of cost. The Centre was asked to issue necessary direction in this regard. The top court also ordered that the tests can only be conducted in NABL accredited labs or any agencies approved by the World Health Organisation (WHO) or the Indian Council for Medical Research (ICMR).

The court was hearing a plea filed by advocate Shashank Deo Sudhi seeking a direction to the Centre and authorities to conduct free of cost COVID-19 tests to all citizens in the country. A bench of Justices Ashok Bhushan and S. Ravindra Bhat gave the Centre two weeks to file an affidavit in reply to the counsel’s arguments. 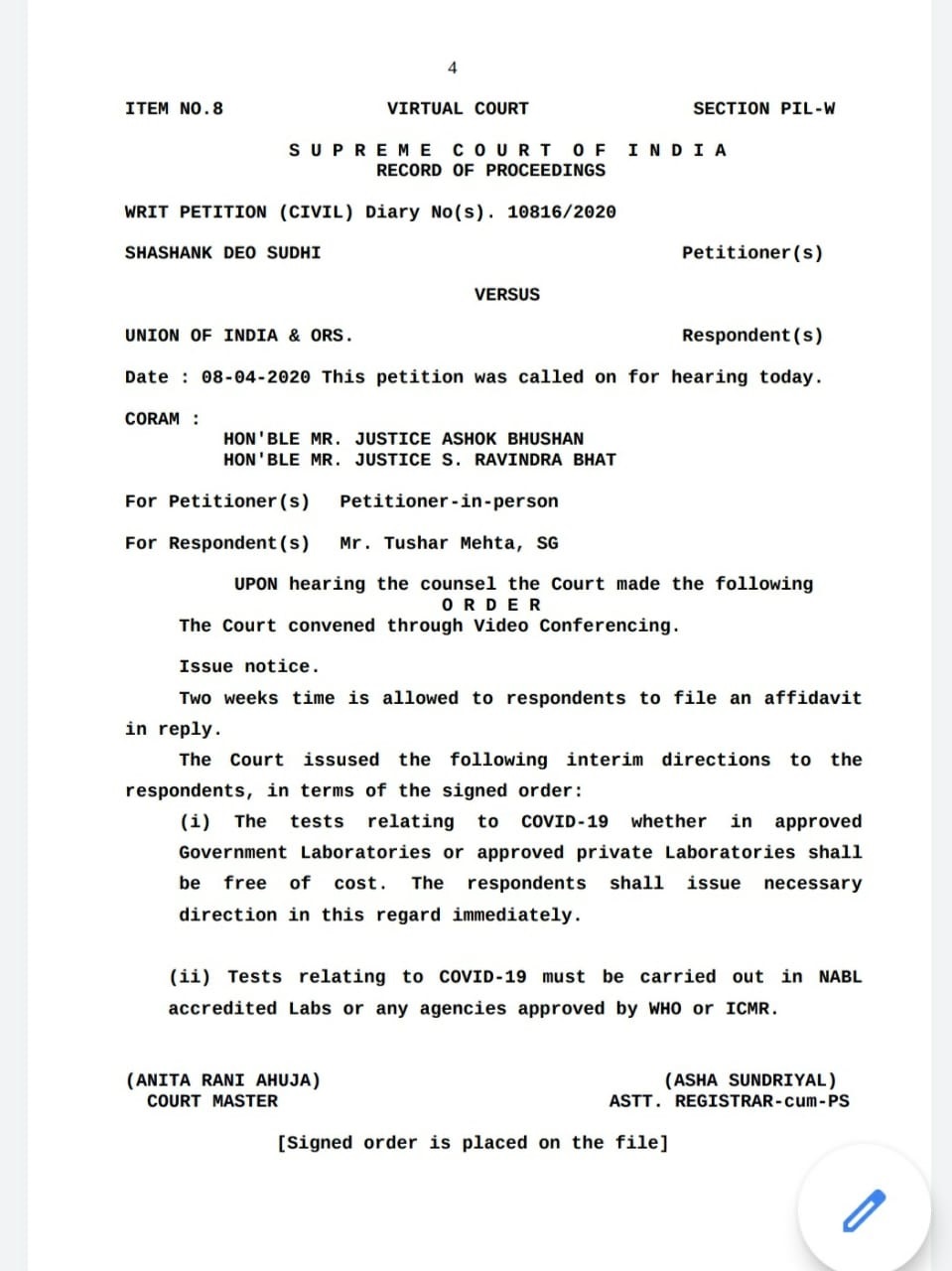 According to LiveLaw, the bench said it found “prima facie substance” in the petitioner’s submission that capping the cost of testing at private labs at Rs 4,500 19 “at this time of national calamity may not be within means of a large part of population of this country”. It observed that no person should be deprived to undergo a COVID-19 test.

While noting that it was informed that testing in government laboratories is free of cost, it added that private hospitals, including laboratories, “have an important role to play in containing the scale of pandemic by extending philanthropic services in the hour of national crisis”.

“We thus are satisfied that the petitioner has made out a case for issuing a direction to the respondents to issue necessary direction to accredited private Labs to conduct free of cost COVID-19 test”, the bench said.

The question of whether these laboratories should be entitled for any reimbursement of expenses incurred shall be considered at a later time.

Earlier in the day, the bench had suggested that the Centre should create a mechanism wherein private laboratories conducting COVID-19 tests do not charge exorbitant fees from public and government should reimburse the fees charged by labs. The court convened through a video conference.

Solicitor general Tushar Mehta, appearing for the Centre, said that as of now, 47 private labs have been allowed to conduct the COVID-19 tests. He added that the situation is developing and the government at this juncture does not know how many laboratories will be needed and how long the lockdown will continue.

To this, the bench suggested that the Centre should ensure that private laboratories do not charge high amount and government should create a mechanism for reimbursement of the fees charges for the tests.

Mehta said he would like to take instructions on this front after which the bench said it would pass orders in the matter.

On April 3, the top court had sought response from the Centre and other authorities on the plea filed by Sudhi.

The petitioner has also sought a direction to the authorities for ramping up the testing facilities for COVID-19 at the earliest “given the escalating mortality and morbidity rate across the country”.

The petition has questioned the March 17 advisory of the Indian Council of Medical Research (ICMR) which capped Rs 4,500 for testing of COVID-19 in private hospitals or labs, including screening and confirmatory tests.

“It is extremely difficult for the common citizen to get himself/herself tested in the government hospital /labs and being no alternative in the sight, the people are constrained to pay the capped amount to the private hospital/labs for protecting their lives,” it said.

The plea said the impending danger of the coronavirus is extremely serious, given the deprived population of the country, and testing is the only way to contain the pandemic. It alleged that authorities are “completely insensitive and indifferent” to the plight of common citizens who are already financially burdened on account of complete lockdown across the country.

“Further, the capping of the prices of the testing facility of COVID-19 in private hospitals/labs strikes at the Article 14 of the Constitution of India as being arbitrary and unreasonable,” it said and urged that the March 17 advisory be declared arbitrary.

The petition also argues that the ICMR should be directed to hold regular news briefings through national TV channels about the current situation on coronavirus and precautions to be taken by the citizens.

The plea also said that the authorities must ensure adequate numbers of testing kits and centres for COVID-19 across the country.