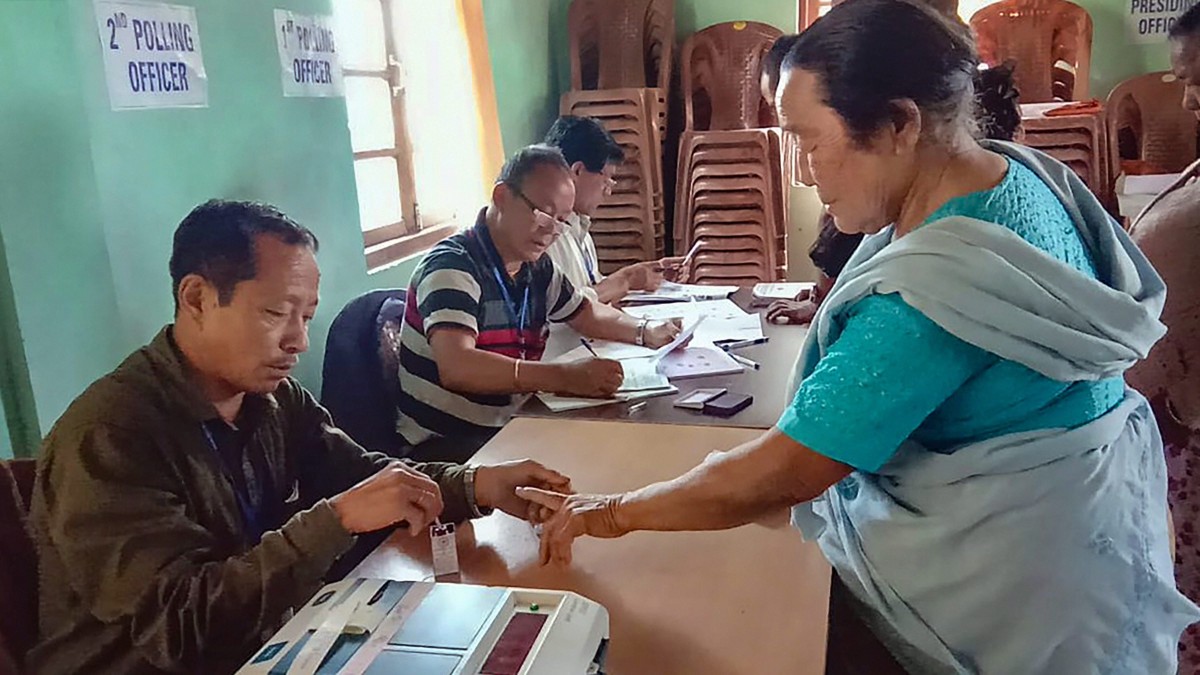 The Science of Weather Forecasting: What It Takes and Why It’s So Hard To Get Right

A voter gets her finger marked with indelible ink after casting her vote in the Darjeeling Lok Sabha constituency, April 18, 2019. Photo: PTI

New Delhi: An indispensable part of the voting process is the ‘indelible ink’ that is applied on the left index finger of every person who exercises their franchise, preventing people from engaging in fraudulent voting.

As five states – Uttar Pradesh, Goa, Punjab, Manipur and Uttarakhand – are in the process of electing new assemblies, let us take a look at the history of this innovation. The ink was one of the first achievements by the Council of Scientific and Industrial Research (CSIR), in the 1950s, when scientists of the erstwhile Chemical Division began researching ways to prevent fraudulent voting. It was later patented by the National Research Development Corporation (NRDC).

The main constituent of the water-based ink is silver nitrate, which on reaction with the nail and on exposure to light gets darker. It will remain on the skin for “at least two days”, according to CSIR. It can even remain up to a month, depending upon the person’s body temperature and the environment.

“The mark will wear off only when the old skin cells begin to die and are replaced by new ones,” D.K. Aswal, director of the National Physical Laboratory, told Mint in 2019.

The newspaper also reported that the strength of the stain depends on the quantity of silver nitrate used. The concentration ranges from 7% to 25%, but the exact composition cannot be disclosed due to proprietary concerns, it said.

The ink also contains a solvent like alcohol to allow faster drying and also has some dyes. “The composition of indelible ink is optimized such that it diffuses into the skin spontaneously to give a definite marking which is resistant to chemical and mechanical manipulations,” CSIR said. It dries up in 40 seconds, by which time a person does not usually leave the polling booth – leaving little chance for manipulation.

The ink is photo-sensitive and needs to be protected from exposure to direct sun rays. “Therefore, amber-coloured plastic containers are a must for storing the ink, which in earlier times was stored in brown-coloured glass bottles,” according to CSIR.

In 1962, Mysore Paints & Varnish Ltd., an undertaking of the Karnataka government, was granted exclusive license to manufacture the ink. Today, lakhs of 10 ml bottles are supplied to governments to conduct elections. Ahead of the 2019 Lok Sabha elections, for example, 26 lakh bottles of indelible ink were ordered at an estimated cost of Rs 33 crore.

While there have been several reported instances of the ink rubbing off, scientists maintain that this is very unlikely – unless there is some foul play involved. According to Mint, there are “certain essential pre-conditions to applying the ink”. If individuals apply greasy materials like petroleum jelly to act as a barrier to the skin, the ink will not react and there is no stain, a scientist said.

The indelible ink is exported to more than 25 countries, including Canada, Ghana, Nigeria, Mongolia, Malaysia, Nepal, South Africa and the Maldives. While Indian the ink is marked on the left-index fingers of Indian voters, other countries have different protocols and Mysore Paints & Varnish Ltd supplies the ink as per their specifications. “For example, in Cambodia and the Maldives, voters need to dip his/her finger into the ink while in Burkina Faso the ink is applied with a brush, and nozzles are used or its use in Turkey,” CSIR says.

After the Narendra Modi government’s decision to ban currency notes of Rs 500 and Rs 1000 denomination in 2016, banks were also provided with the indelible ink to mark customers exchanging defunct currency notes to check “suspicious deposits”.