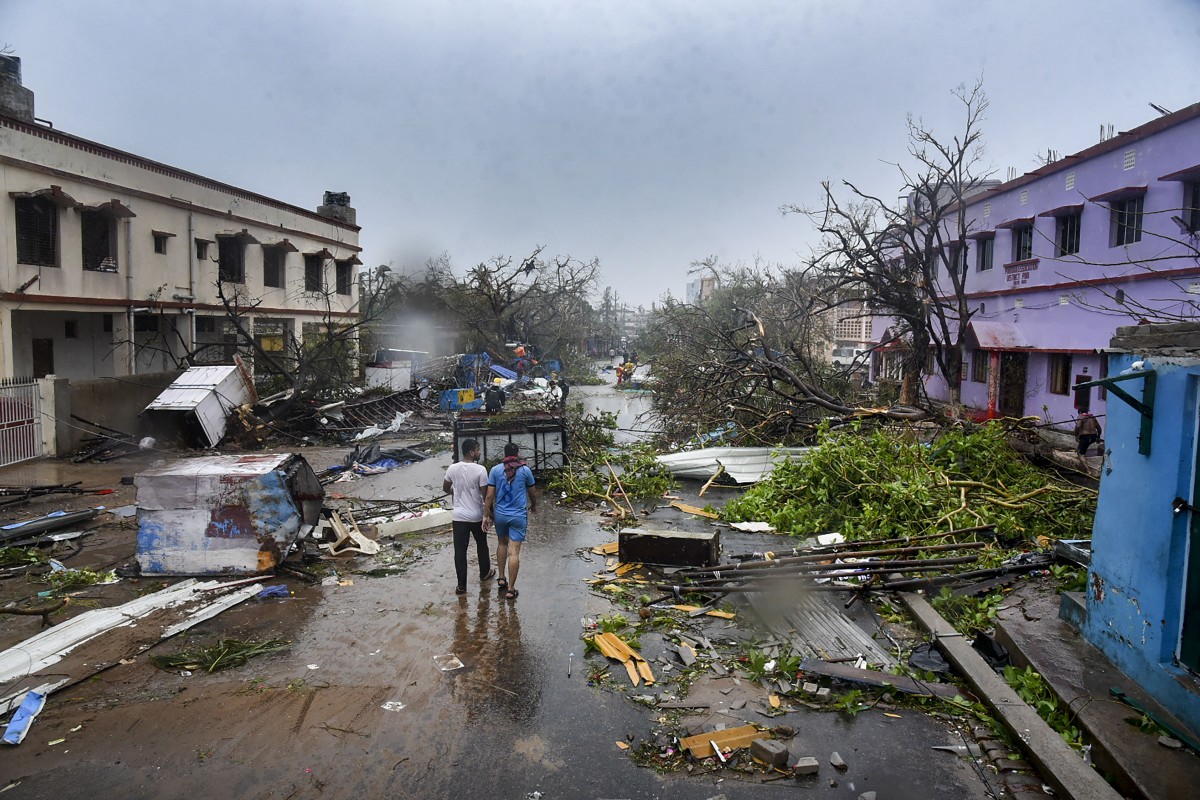 Bhubaneshwar: The death toll in Cyclone Fani rose to 16 in Odisha on Saturday as the government mounted a massive restoration work across 10,000 villages and 52 urban areas ravaged by the storm that pounded coastal parts of the state, affecting nearly one crore people.

The extremely severe cyclonic storm, that made landfall at Puri on Friday, was one of the “rarest of the rare” summer cyclones – the first to hit Odisha in 43 years and one of the three to hit in the last 150 years

It unleashed copious rain and windstorm that gusted up to 240 kmph, blowing away thatched houses and swamping towns and villages, before weakening and entering into West Bengal, officials said.

It was the severest cyclone to hit the state since the Super Cyclone of 1999, which had claimed nearly 10,000 lives and devastated vast areas of the state.

The toll due to Cyclone Fani, which stood at eight on Friday, mounted to 16 on Saturday – four deaths in Mayurbhanj district, three each in Puri, Bhubaneswar and Jajpur; and one each in Keonjhar, Nayagarh and Kendrapara, officials said.

Prime Minister Narendra Modi is likely to visit Odisha. He spoke to chief minister Naveen Patnaik and assured continuous support from the Centre.

“Spoke to Odisha CM Naveen Patnaik ji and discussed the situation prevailing due to Cyclone Fani. Assured continuous support from the Central Government… The entire nation stands in solidarity with all those affected by the cyclone in different parts,” Modi tweeted.

The extremely severe cyclone flattened thatched and kutcha houses, uprooted lakhs of trees, besides electric poles and mobile towers in the coastal Odisha.

The seaside pilgrim town of Puri was the worst hit. Equally devastated were capital Bhubaneswar and neighbouring Cuttack city which plunged into darkness since Friday with the collapse of the power infrastructure.

“Lakhs of trees were uprooted in the cyclone blocking roads, damaging houses and damaging public infrastructure,” he said.

“In fact, for Puri district and parts of Khurda where power infrastructure has been totally devastated, we face the challenge of having to set up the entire electrification afresh,” Patnaik said.

The districts of Cuttack, Bhadrak, Kendrapara, Jagatsinghpur, Balasore, Mayurbhanj, Keonjhar, Dhenkanal and Nayagarh have also been affected and detailed information is being collected, he said.

Informing that work is in progress on a war footing for restoration of power and water supply, he said hundreds of engineers and technicians are working to restore the services.

Four senior officers have been entrusted with the task of monitoring relief, restoration and rehabilitation operations.

The CM said that free cooked food will be provided to the cyclone affected people for the next 15 days.

Patnaik said, “We are in the process of restoring critical infrastructure.”

An estimated one crore people in 10,000 villages and 52 urban agglomerations in around 14 districts were affected by Cyclone Fani, said a senior official.

Energy secretary Hemant Sharma said that around 30 lakh power consumers have been affected. Power infra has been severely damaged in Puri, Khurda, Ganjam, Jagatsinghpur, Kendrapara and Balasore districts and efforts are on to restore complete normalcy at the earliest.

In Bhubaneswar city, over 10,000 electric poles have either been uprooted or broken, he said, adding efforts are on to restore power supply in crucial establishments like airport, railway station and hospitals by Saturday night.

Sethi said that around 10,000 low power transformers have been damaged due to the cyclone and the government has approached the Steel Authority of India Ltd for expeditious supply of electric poles.

He said that the Centre has postponed the examination date for Odisha students who were to appear for NEET and AIIMS examinations. The state has so far been able to restore all national and state highways and district roads.

The state has received additional four NDRF teams for restoration. Most of the NDRF personnel are engaged in Puri, Bhubaneswar and Cuttack, he said.

Officials said that the Indian Navy, Air Force and Army are on standby to assist in relief and rescue work. The quick reaction team of the premier Naval Training Establishment, INS Chilka located in Odisha was immediately deployed, they said.

The chief minister said that 12 lakh people had been evacuated and shifted to safer locations 24 hours ahead of the cyclone in probably the largest such exercise in the country.

Flight operations at Bhubaneswar airport resumed Saturday and many stranded passengers were sent to Delhi by a special plane, an official said.

There will be no trains to and from Puri till May 10 at least, the official said.