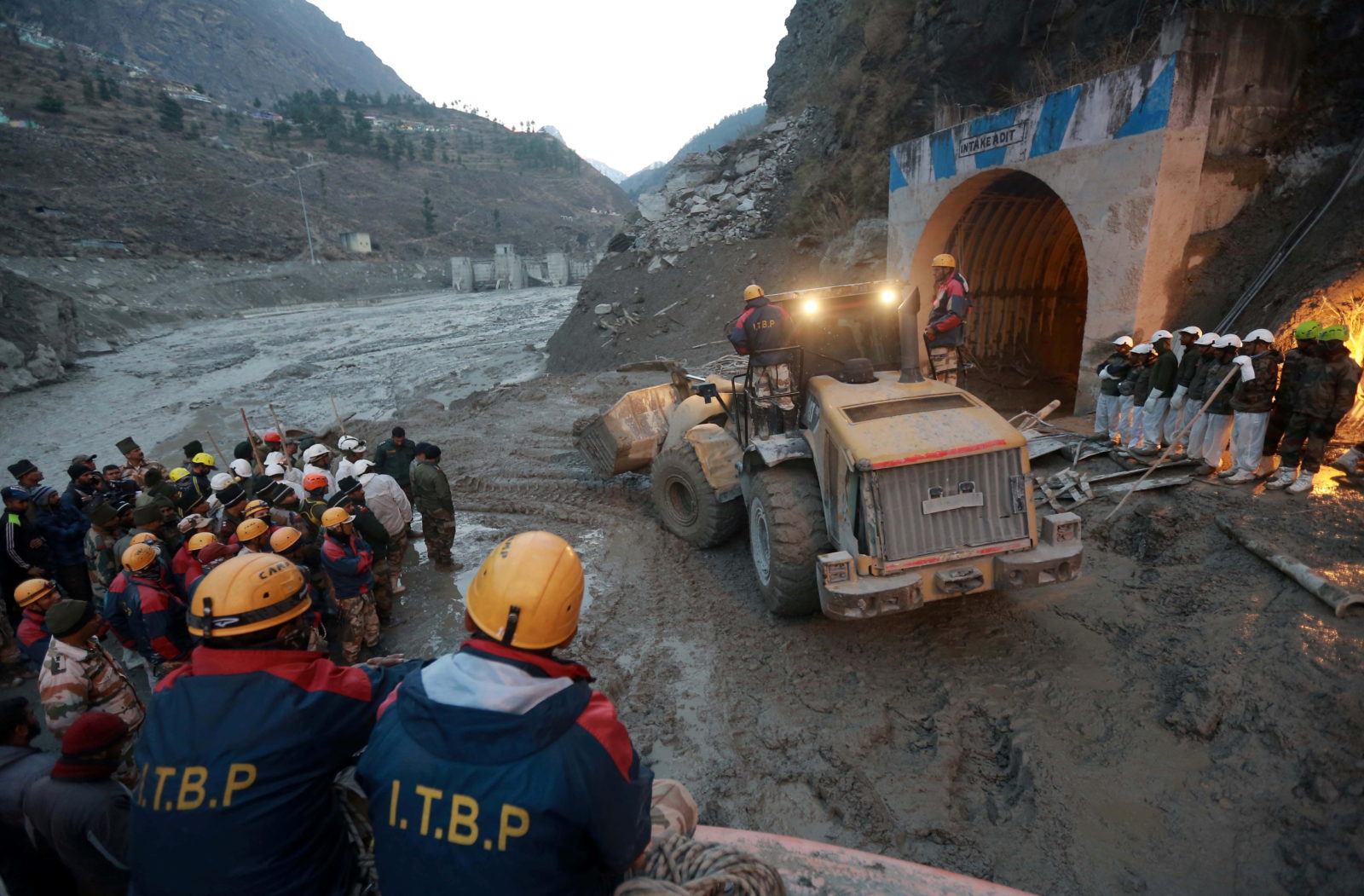 Members of Indo-Tibetan Border Police watch as a machine is used to clear a tunnel after the flood, in Tapovan, Uttarakhand, February 8, 2021. Photo: Reuters/Stringer.

New Delhi: As a part of the Nanda Devi glacier broke off in Joshimath, in Chamoli district, and hurtled downstream on the Dhauli Ganga, towards the Tapovan hydroelectric power project, some people idling under the Sunday sun in the mountains above first spotted the huge column of debris approaching and alerted workers at the site below with shouts and whistles.

Manish Kumar, a survivor of the incident, ran uphill on hearing the loud rumble and clamour later; he later said that a proper alarm system could have saved more lives.

By then, a few kilometres upstream, the Rishi Ganga power project had been completely washed away.

No way to warn

If there had been cameras or sensors installed a few kilometres upstream, and the alarms had gone off even five or 10 minutes earlier, many more lives could have been saved. But that was not to be.

The Tapovan power project, in the making for 15 years, has already witnessed three major episodes of flooding but still doesn’t have a functional early-warning system that could have alerted its workers to an impending flood.

The Chamoli tragedy has annotated yet another major oversight and lapse on the Centre’s part – that it hasn’t taken any lessons from the past and taken simple safety measures.

Environmental activist and water expert Himanshu Thakkar told The Wire that “in Raini village, when the first visual was seen, there should have been a system to immediately warn people downstream. That could have saved lives in Tapovan and other places.”

Thakkar, who is coordinator of the South Asia Network on Dams, Rivers and People (SANDRP), acknowledged that “physically monitoring this entire area is not possible.” However, “satellite monitoring is possible and radars can also help minimise loss.”

He expressed surprise that despite possessing remarkable satellite capabilities, India still hasn’t been able to use such imagery effectively for advance warning.

“In this case, even after 48 hours of the tragedy, the images are not coming from our agencies but from global players like Planet Labs, the US, etc.,” Thakkar said. “And this is not the first time that there has been such a lack of information flow from Indian agencies. In the past, too, when there has been such an incident in a remote area and there were floods and damage to downstream infrastructure, Indian satellite data hardly ever helped.”

Considering the region faces a higher risk of flash floods than the rest of the country, the idea of installing Doppler radars in Uttarakhand showed up long back. “They were to be installed much before the June 2013 devastation,” according to Thakkar. “Even then the issue was discussed, since the financial allocation for these radars had already been made.”

But the first of them was finally installed only in 2020, he said.

These instruments are expected to be able to warn of the possibility of a cloud burst, heavy snow or other such sudden events a few hours in advance.

An 2019 analysis by SANDRP estimated the relative threats posed by extreme weather events. It found that there had been 23 cloud-burst events in the state during the 2019 monsoon season alone – rendering the absence of an early-warning instrument more conspicuous.

Thakkar said that barring the Snow and Avalanche Study Establishment under the Defence R&D Organisation, which measures the amount of snow for the defence forces in the border terrain, few other institutes or centres are dedicated to studying this form of precipitation.

“In this tragedy, snowfall had a huge impact,” Thakkar said. “There was heavy snow in the region on February 4 and 5, and that along with the melting and possible landslide contributed to the tragedy.”

Thakkar added companies engaged in construction projects on the rivers couldn’t be expected to be responsible for monitoring threats upstream. Instead, he said, the projects appraisal system should have a threats memory.

“In Tapovan, if you are building such a big dam, obviously you are required to appraise the catchment area to see what the disaster potentials and vulnerabilities are,” he explained. “On that basis, you have to take precautionary steps for both the safety of the people and the project.”

Even since the massive Kedarnath flood in 2013 that devastated the state, leaving over 5,000 dead, many missing and destroying property worth billions, there has been considerable chatter among lawmakers about installing early warning-systems. But precious little has happened on the ground.

In 2017, Union minister of state for atomic energy and space Jitendra Singh said in a written reply in Lok Sabha that “an experimental early warning system for rainfall triggered landslides is developed for use along the pilgrimage route corridors leading to Gangotri, Badrinath and Kedarnath as well as along the Pithoragarh-Malpa route in Uttarakhand.”

In this system, Singh continued, “the forewarning is generated based on the statistical relation between the terrain (geological, morphological) and temporal (primarily long term rainfall events) factors.”

His reply also stated that for “heavy rainfall/cloud burst alerts”, the Indian Space Research Organisation’s Space Applications Centre in Ahmedabad had developed an experimental model for the Indian region.

Extreme rain, snow on the rise

The number of instances of extreme rain and/or snow, as well as flash floods, has been rising in the lower Himalayan region.

According to a report last year, a team of researchers from IIT Bombay and the National Institute of Hydrology, Roorkee, have found that extreme rainfall events in the Sutlej river basin in Himachal Pradesh and the Ganga headwaters in Uttarakhand more than doubled between 1980-1991 and 1992-2003.

It also cited another study, by IIT Kharagpur hydrologists, that the frequency of extreme rainfall over south India as well as the Himalaya had increased significantly during the southwest monsoons.

The report had quoted Rajib Maity, a co-author of the study, saying that since extreme rainfall events can’t be avoided, “we need to adopt flood mitigation strategies”. Another co-author and professor at IIT Bombay, Subimal Ghosh, said that “it is time we set up an early warning system for the Himalayas as well” as that could benefit nearly 17 million people in the region.