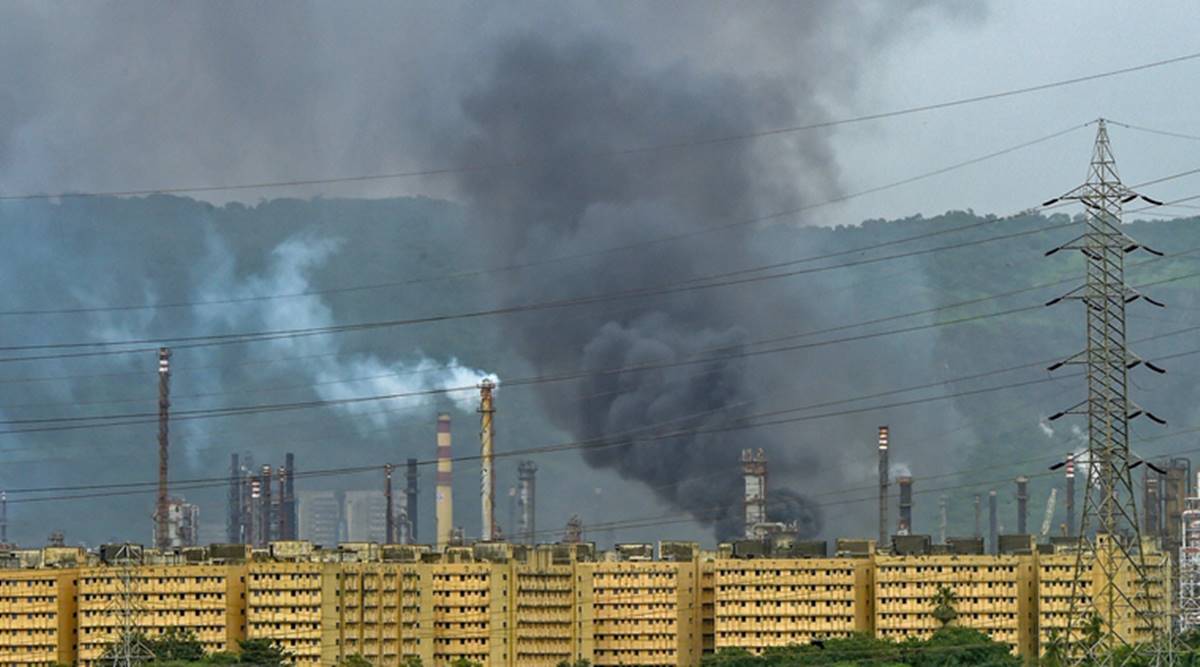 Mumbai: The fire that followed a blast in the Bharat Petroleum Corporation Limited’s (BPCL) plant in Mumbai on Wednesday, injuring 43 people, has been put out, but it has raised many important questions in its wake. The safety measures undertaken by BPCL being the most crucial of them – the company insists that all prescribed steps were followed. But equally serious is the potential bigger disaster with a large number of people living in a cluster of buildings almost cheek by jowl to the plant.

These residents, most of them moved here by the state government as part of various rehabilitation schemes, have been protesting against the location which is right in the middle of several petroleum and chemical plants, including the BPCL one. The blast occurred barely 60 feet away from one such cluster of buildings.

Several residents have gone to court and one of them, Mahesh Limbatiya, was at the Bombay high court along with many others when he received a call from a neighbour informing him about the blast. The windows of most houses had shattered and residents, especially children and sick persons in the colony, were deeply shaken after seeing flames spread rapidly. Limbatiya and others were in the court for an important hearing in their long-standing fight to be moved out of the area where people have been falling sick due to toxic gasses emitted out of refineries surrounding the buildings, collectively known as MHADA colony. “We knew this would happen, but did not know it would be this soon,” Limbatiya told The Wire.

The blast had occurred in a hydrocracker unit containing 72 tonne hydrocarbon used for diesel generation. According to BPCL officials, an explosion was triggered inside a compressor shed of the hydrocracker plant. Residents claimed the tremor could be felt as far as three kilometres from the spot.

An employee of the hydrocracker unit who escaped in the nick of time said, “There was a pungent smell suddenly all across the unit. This was much stronger than the usual gas we smell in the plant. Immediately people were made to follow the drill and assemble at a safe spot. But in no time, we saw fire at one spot and that led to chaos.” He also said that workers panicked and ran towards the exit leading to confusion. “Some were working at a height. When fire broke and subsequently a boiler blasted, some people working at a steep height fell. They have been injured gravely.”

Most suffered bone injuries caused due to heavy metallic instruments falling on them from a height. By the end of the day, some were released on receiving preliminary treatment, the rest with fractures were admitted at Sushrut Hospital nearby. A BPCL spokesperson said, “The hydrocracker unit has been safely shut down while the other units are normal.” He further added that the fire was brought under control within less than an hour and their team was assessing the damage. “No product shortage is envisaged on account of the fire,” he further said.

Santosh Tambe, who has been working as a security guard at the refinery for the past few years, told The Wire that at least 500 people were working at different plants and had fled from the spot soon after the explosion. “As soon as the fumes erupted from the plant, people started to run out. Within minutes there was a huge thud. We were certain a chemical explosion has occurred inside. I ran away too from the gate,” Tambe said. He added that no such incident had ever happened at this plant or other industrial units in the past.

Even before the fire department had mobilised their fire engines, BPCL claimed that nearly 15 of its fire-fighting vehicles had got on to the job. “The fire could have spread if not for the attentiveness of the BPCL workers, who tried and contained the fire,” a BPCL official said.

There is relief mixed with fear in Mahul’s colony, located on the eastern seafront of Mumbai and with 71 buildings in which there are nearly 17,500 one-room apartments. In May last year, over 1,000 informal houses – slums – near a water pipeline in Ghatkopar and Vidyavihar in central Mumbai were flattened by the Brihanmumbai Municipal Corporation (BMC). The BMC, complying with a 2009 high court order, had demolished these houses and other commercial structures along the water pipeline that runs across nine administrative wards of the city. These demolitions were carried out on a public interest litigation filed by NGO Janhit Manch seeking the removal of encroachments near Tansa water pipeline that runs through the city.

Of the 160-kms of pipeline, around 90 kms are over ground. In its affidavit in 2009, the BMC had claimed that over 15,000 structures have mushroomed near the pipeline over the years. Of them, around 5,000 families have been allotted houses in the colonies. Many are yet to move in and have been resisting because of the area’s toxicity.

The ones who have moved in the multi-storeyed buildings have found themselves in the vicinity of a heavily-industrialised area with Hindustan Petroleum and Bharat Petroleum refineries operating at a dangerous proximity. Other industries like Sea Lord Containers, Aegis Logistics Ltd, Tata Power and Rashtriya Chemical and Fertilizers also operate nearby. The residents here have been complaining of acute breathing problems and emission of thick pungent smoke directly into the air.

“The air has been corroding our skin and hair, every house has at least on sick person. We don’t need the containers in these refineries to blast, our people have been dying every day,” said Rekha Gadge, a resident and also one of the vocal voices from the colony. Gadge too was at the court. “It was afternoon time and most people had gone to work. Children were at school and some of us had come here. A little later, you would have had children playing right outside the refinery. We just managed to escape,” said Santosh Tare another resident.

In 2015, the National Green Tribunal had termed Mumbai’s Mahul region “unfit for human habitation”. The tribunal had relied on a report submitted by KEM Hospital that showed significant occurrences of incidents of air pollution-related health effects on the residents. The order had observed: “The KEM report has identified a particular air pollutant related to the adverse health impacts observed in the local population. It is high time now that the subject of air pollution control and air quality management be identified and treated as a “Public Health Issue” and be given due priority and importance it deserves.”

Bilal Khan, the convener of Ghar Bachao Ghar Banao Andolan, points out that the order has been overlooked and instead of attending to people’s woes here, “NGT had asked the Maharashtra Pollution Control Board to create a buffer zone between the residents here and the refineries. It is a three-year-old order and no buffer zone has been created to this date.”

The state, in fact, went on to challenge the NGT order, specifically on the observations that it is not fit for human habitation. On Wednesday, as the fire raged, a division bench of Justice Abhay Oka and Justice Riyaz Chagla gave the state till October 1 to decide on the future of residents here –find them an alternative accommodation or work out an option of paying their monthly rents so that they could acquire temporary accommodation elsewhere.

The court has also asked the Indian Institute of Technology, Bombay to conduct a survey of the buildings in Mahul and find out what kind of problems are there and submit a report before the court. Given the sudden fire at BPCL plant, the residents here are hoping that the court will step in. “We don’t expect anything from the state anymore. On October 1, we hope the court would step in to save our lives,” Limbatiya added.

Mumbai: ‘96% Of COVID Patients on Oxygen Are Unvaccinated’