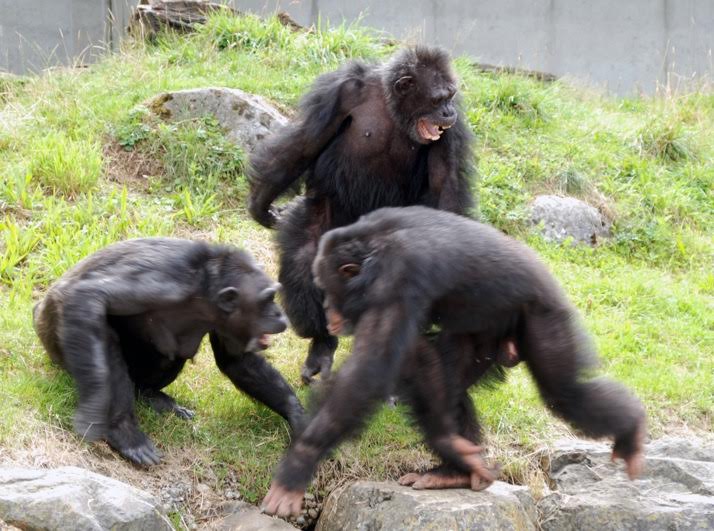 Vyapam is the Symptom, Criminalisation of Medical Education is the Disease

Were it not for social etiquette and rules, humans could not live together in a society. Parents and elders teach us some rules, we learn others as we grow, and some rules are innately coded in our brains as a species. Many insist that this sense of morality sets us apart from animals.

Primatologists have long suspected that our closest primate relatives may share this trait. Since we had a common ancestor until 6 to 7 million years ago, chimpanzee and our brain power have the same roots.

In the wild, social groups of males and females hunt together, share food, and kill rival troop members, much like humans. Chimps are like us in many other ways: they bond with other members of troop, and they reconcile after a flare-up. Do they need a sense of morality to manage their social lives?

Chimps know a bad deal when they see one. When chimps notice others getting more reward for doing the same thing, they refuse to play the game. When a high-ranking chimp mistreats them for no good reason, they shriek ear-piercingly or throw themselves on the ground with force, not unlike a child’s temper tantrum. They are certainly as intelligent as young children.

Besides safeguarding their own interests, they also appear to act for the larger good of the community. When a major fight breaks out, other chimps bark vociferously as if in protest. Do they react to the noisy fracas, or do they mean to bring peace? When two chimpanzees fight, high-ranking females or males calm them down by grooming or embracing. Whether such arbitration benefits the mediator by increasing his or her status in the troop, or whether the mediator has the best interests of the group at heart isn’t clear. If they have a sense of morality, the evidence was at best circumstantial.

In a new study, published in Human Nature, called ‘Chimpanzees bystander reactions to infanticide,’ lead author Claudia Rudolf von Rohr confirms for the first time that the primates have a rudimentary sense of morality.

Scientists from the University of Zurich, Switzerland, conducted an experiment with two groups of 17 chimpanzees living in zoos. What would chimpanzees do if they witnessed a social wrong that didn’t personally affect them?

The researchers showed the captive primates video clips of what wild chimpanzees normally do – crack open nuts, hunt colobus monkeys, and adult males fighting with each other.

The captive chimps had no opportunity to hunt before. Surely, they would find the drama of wild chimps hunting and killing a colobus monkey engrossing. But the primates paid the hunting scenes only a tad bit more attention than videos of wild chimps hammering nuts. Even the snippet of fighting adult male chimps failed to interest them.

However, when researchers showed them a horrific snippet of a troop of adults ripping apart an infant, the chimp viewers couldn’t take their eyes off the screen.

Adult chimps dote on their babies. Even when the little ones jump on big, fearsome males, steal food from others, or interfere with mating adults, they are treated with kid gloves. Adults tickle and wrestle with infants not their own, and they don’t use all their skills and strength. Instead, they pretend to have the same abilities as youngsters. When a baby gets hurt, even a large male may cradle it. Chimps treasure their babies as we humans do ours.

However, when two neighbouring troops fight over territory, slow-moving babies may be killed by rivals. Primatologists can’t explain the rare instances when babies are killed by their own troops. They surmise an alpha male may kill a baby he suspects is not his. Females may kill babies of other females when food supplies shrink.

In Gombe, Tanzania, researchers counted 112 newborns over 40 years. Of these, only 5 were killed by their troop mates. During such incidents, emotions run high; other chimps scream and bark, while some attempt to protect the mother and save the baby.

The two Swiss troops involved in the experiment had experienced infanticide when newborns rejected by their mothers were killed by other females. Since they had this traumatic history, Rudolph von Rohr and her colleagues expected the primates to watch the infanticide scenes for longer time than others, and react agitatedly. Primatologists and child development experts study the length of time primates and infants watch to assess their expectations. They stare longer at unexpected events.

As predicted, males and females, with and without babies, were riveted by the infanticide video, spending twice the length of time watching it than any other video. Even though colobus monkeys are the same size as chimp babies, the primates showed more interest in infanticide than hunting. These chimpanzees provided the first evidence that they expect appropriate social behaviour.

But surprisingly, they did not get agitated by the gruesome scenes. Only one female walked around restlessly, scratched, and yawned. It might not sound like much, but to primatologists watching her say she reacted aggressively.

Researchers speculate that perhaps chimpanzees like humans do not react to violence seen on screen. Or the primates may not react to aggressive incidents involving non-troop members. To find answers, researchers ethically cannot kill a baby chimp; they can only fine-tune the experiment.

Claudia Rudolph von Rohr told The Wire she plans to show captive chimpanzees videos of infanticide committed by their own group, where they can recognise individuals, and incidents committed by unknown groups. She also plans to add a video clip of a chimp baby getting hurt in the normal course of play. Comparing their reactions to these three events will tell us if our closest relatives’ sense of morality is more evolved than the recently published study indicates.