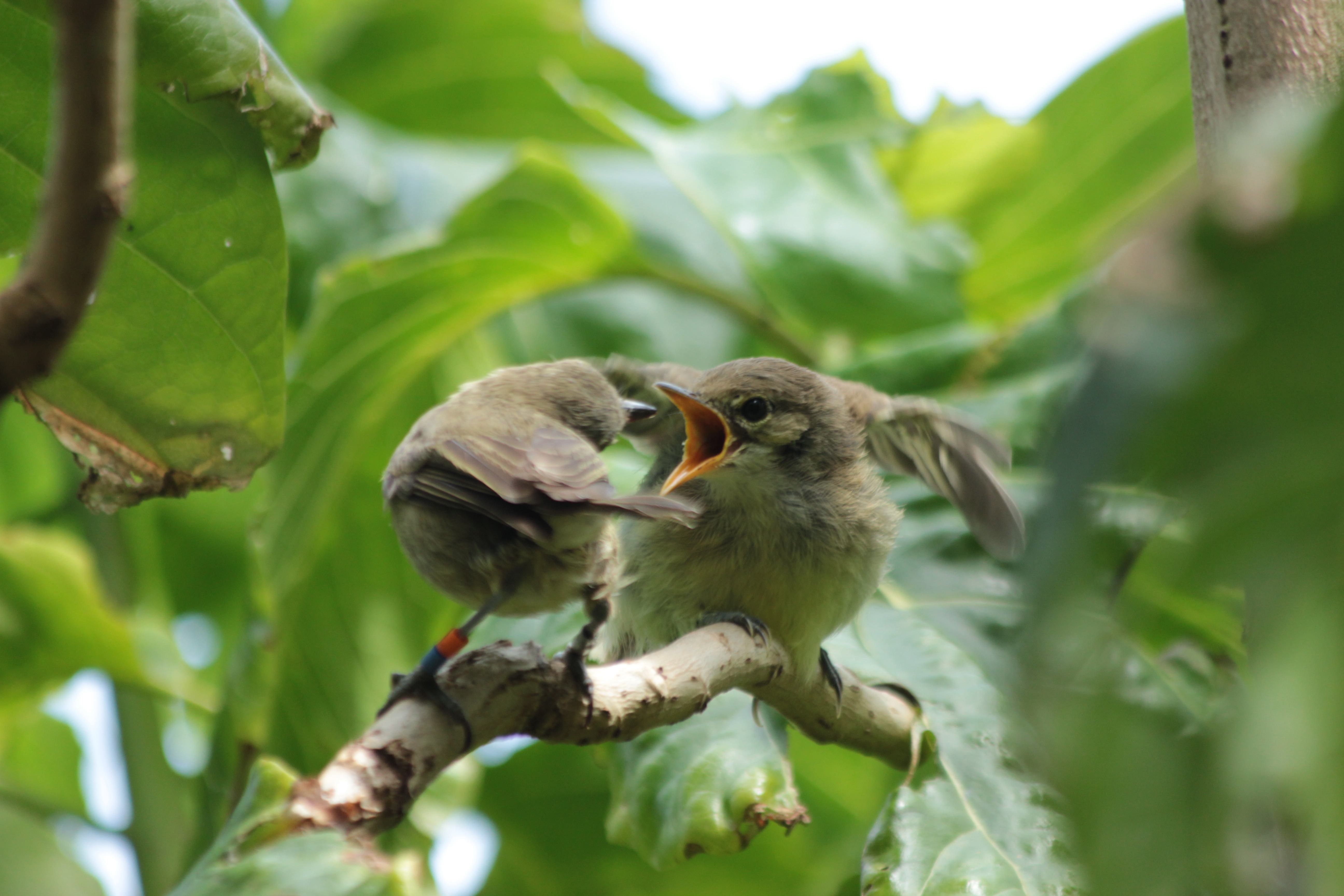 Surrogate parents of unrelated nestlings could forgo food while incubating eggs and foraging for chicks, and they lose weight. What makes them act in such a generous manner? Are they altruistic?

‍Animals do the most amazing things. Read about them in this series by Janaki Lenin.

Young male moustached warblers (Acrocephalus melanopogon) are the saviours of single mothers. If the females’ consorts disappear, these bachelors step in – incubating eggs, feeding chicks and chasing predators away. Why do they forgo their chance of breeding and help to raise other males’ young?

These warblers are by no means exceptional. Other species like fairy-wrens (Malurus spp.) live in groups of relatives and unrelated individuals. Many die so the surviving spouses hook up with others, so it is inevitable for the babysitters to raise unrelated young.

At least bell miners (Manorina melanophrys) assist their own family and relatives. Instead of leaving their parents’ territory after fledging, the young adults stay to help. Aiding one’s own kin – called kin selection – benefits parents and siblings. Parents don’t have to work as hard, and with the energy savings, they live to breed another day. The young don’t lack for anything with the extra attention. Solicitude is a trait in birds that breed in cooperative groups, which make up about 9% of all bird species.

At one time, ornithologists assumed all helpers were related to the breeders, but molecular testing revealed that strangers regularly played surrogate parents in about 20% of these cooperative nesting birds.

Evolutionary biologist Christina Riehl, then at Harvard University and now at Princeton University, New Jersey, reviewed how and why these seemingly altruistic birds provide their services to breeding adults.

While playing nanny, young male pied kingfishers (Ceryle rudis) try to sneakily mate with the breeding female. If that ploy fails, they hang around as helpers, hoping to father the next round of offspring. The female is more likely to accept a helper as mate if he assists with her previous batch of young.

But not all surrogate parents of unrelated nestlings gain such clear payoffs. In fact, they could pay a price. The helpers forgo food while incubating eggs and foraging for chicks, and they lose weight and body condition. This could mean they aren’t in the best shape to reproduce and they could even jeopardise their own survival. What makes them act in such a generous manner? Are they altruistic?

According to one theory, in return for being allowed into the breeders’ territory, parental aides ‘pay rent’ by helping with childcare. Another says helping others allows them to practice skills they’d need later in life. Yet another suggests birds are programmed to stuff food down the gaping mouths of any chicks, whether related or not. Other inferences include shortage of females and formation of alliances.

Evolutionary biologist Sjouke Kingma of the University of Groningen, the Netherlands, has worked on cooperative breeding in birds since 2010. To find an overarching theory that explained surrogacy, he analysed 44 species of birds that provided parental assistance to others of their kind.

Birds need to have territories to meet all their needs – food, water, shelter and breeding sites. For 28 species that he examined, territories were at a premium. Where habitat is completely carved up by others, about 30% of the subordinates inherit their fiefdoms in part or whole from breeders. Could territory be the key reason for providing nestling care?

“I got this idea from a study on fairy-wrens,” Kingma told The Wire. “The idea is not so new.”

The remaining 16 species don’t have real estate concerns. Non-breeders of this group help others in the colony if they themselves fail to breed or they haven’t matured yet. But the majority have an asset problem. When this resource is in short supply, these species trade child-rearing services for property. This incentive drives parental aides to keep their wards well-fed, overlooking the distinction between relatives and strangers. They work themselves to the bone, striving 50% harder than helpers that don’t suffer a territory crunch.

How would birds know they stand to inherit the territory? How do they strike the deal?

“I think individuals might not know,” replies Kingma. If single birds with no prospects of breeding help and as a result, gain benefits, natural selection chooses that behaviour. “So I don’t know if it works within a species directly, but variation across species may have evolved this way.”

It’s an arrangement that benefits all parties. The parents gain extra help in raising young, and the nestlings get better care and thus survive to adulthood. The surrogate parents get paid in property later with the added bonus of raising a crop of future aides that may help them with their own parental duties when the time comes.

Although the idea that birds might trade childcare services for territory is not new, “nobody really showed empirical evidence for it on this scale,” says Kingma.

Benefiting from providing support probably plays an even greater role than is often assumed, says Riehl. “The exciting thing about these results is not that they undermine the importance of kin selection – in fact, they highlight the importance of kin selection in some cases – but that they illustrate the diversity of ways that natural selection can favour cooperative breeding in birds. Kin selection and direct benefits aren’t mutually exclusive hypotheses. Rather, they often reinforce each other, and both are important drivers of cooperation.”

In many species, property titles are dearer to males. It’s possibly no coincidence that the majority of surrogate parents are males. Territory is essential for females of some species. Would they act as au pairs in exchange for property too?

“Males and females would equally benefit,” says Kingma, “although we see that helpers are more often male than female in many, but not all species. I think that the role of kin selection is slightly overestimated. Helping unrelated individuals may bring lots of benefits in the future.”

Indeed, female white-winged trumpeters (Psophia leucoptera) assist a breeding female whose territory they’ll inherit when she dies. Since young females are kicked out of their homes by their parents and cannot establish their own fiefdom, assisting a dominant female is the only way they can take a shot at reproducing.

Kingma thinks many more questions remain to be answered. For instance, what determines which particular helper inherits territory? How is hierarchy established among many helpers? How do they resolve property disputes?

Seen through the prism of real estate shortage, nannies among fairy-wrens and moustached warblers have struck a bargain deal.

The study was published in the journal Nature Communications on October 23, 2017.

The Wire Science@TheWireScience
3 Following 26.1K Followers
Exaggerating the deadliness of wildfires props up the myth that wildfires are invincible. The word ‘firefighter’ h… https://t.co/Ac77T31siU
6 hours ago
India logged 29,616 new coronavirus infections in the 24 hours before 8 am on Saturday, once again seeing a rise in… https://t.co/H8oa7nGhDz
7 hours ago
1
Clinical trials that found the antiparasitic drug ivermectin could be used to treat or prevent COVID-19 were fraugh… https://t.co/IgHC91zAON
9 hours ago
The international treaty that phased out the production of ozone-depleting chemicals has prevented between 0.65°C a… https://t.co/VgnTa9Fgap
9 hours ago
1
“Even paying much for your death in Russia can’t save you from being a part of the criminal conflict.” On Septembe… https://t.co/WzR8BRihwi
11 hours ago
1
"Global immunity requires solidarity, so hoarding cannot exist in the face of others’ needs. Some countries have a… https://t.co/TPZfIAORmV
12 hours ago
1 2
Stating that in Kerala, in the last three weeks, hospital admissions have declined by 24%, ICU and ventilator requi… https://t.co/e5xIUk03rG
12 hours ago
Bihar performed the best among all the states in administering COVID-19 vaccines on PM Modi's birthday. As per a n… https://t.co/OsLcVIvWJn
13 hours ago
1
According to a New York Times report, the ICMR suppressed data that contradicted the government’s rosy predictions.… https://t.co/2DNQr8D372
1 day ago
1
Clinical trials in India have had a troubled past. In the last ten years, 311 trial participants have died due to… https://t.co/II6bTcyoxg
1 day ago
1
With climate change, the variation in the temperature and rainfall could increase. This is why farmer leaders beli… https://t.co/QDURpLvzJU
1 day ago
Researchers Bhargavi and Chelmala Srinivasulu have been called the Bat Woman and Bat Man of India, not only because… https://t.co/dDlk9oFQAd
1 day ago
2
'The time has come to stop chasing after the last cancer cell and focus on eliminating the first.' In her ‘The Fir… https://t.co/GE64gzmWAZ
1 day ago
1
"AYUSH let the cat out of the bag: claim the seal of approval of science to push its remedies, and claim incommensu… https://t.co/vsUb0PEMgW
1 day ago
1
Even low concentrations of particulate pollution are harmful to human health, so it’s not clear why the WHO has shi… https://t.co/I0iJktgjfU
1 day ago
2
Contact us

More Fun Than Fun: Weaving with Silk, the Ant Way

More Fun Than Fun: David Wake, Salamanders and the Origin and Loss of Species