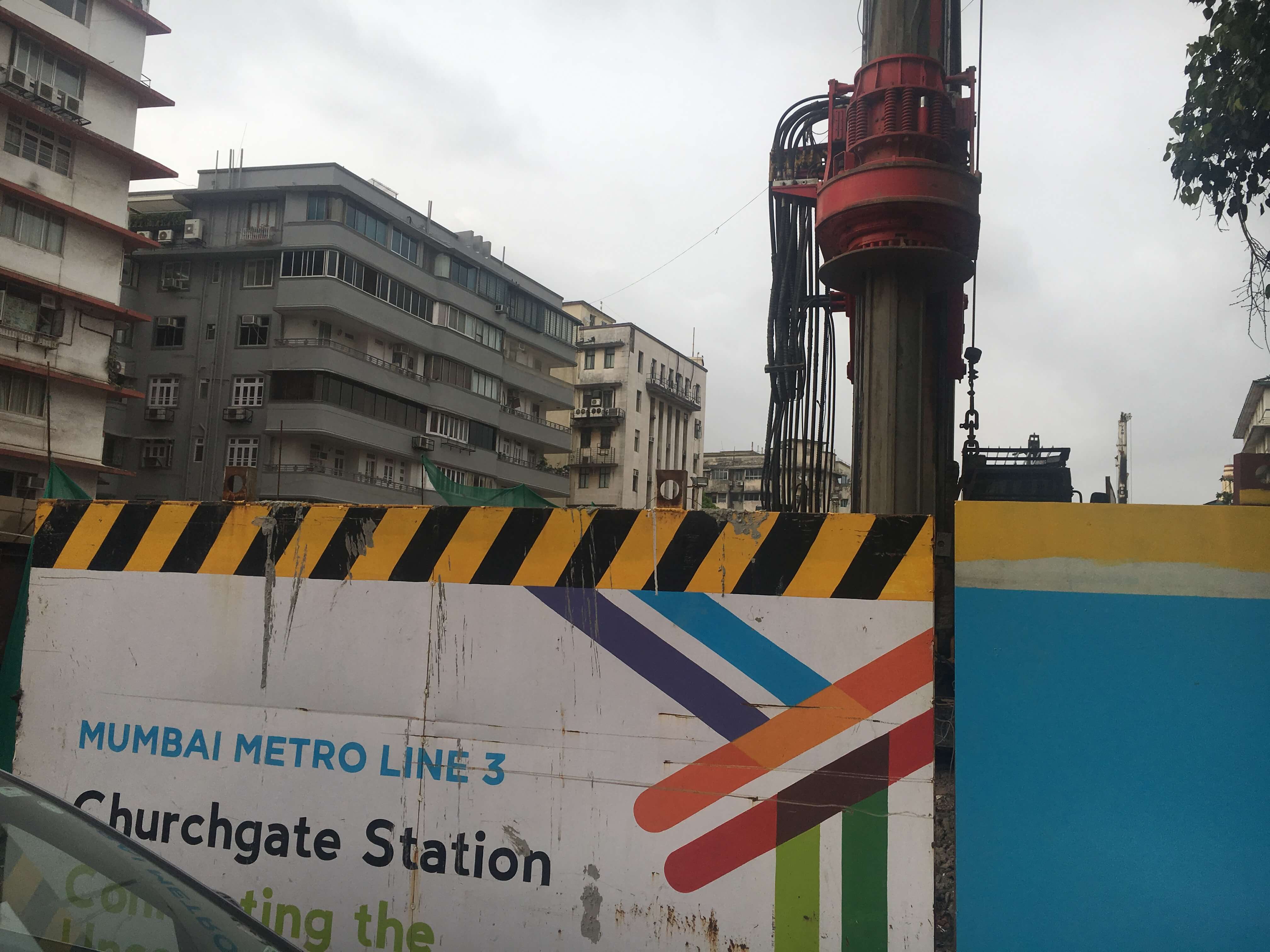 The System of Scholarly Publishing Is Broken. How Can We Fix It?

Mumbai: For a few months now, 72-year-old Mary Menezes has been experiencing headaches. “My neighbourhood used to be very quiet. Now it is extremely noisy – first there was the banging and drilling, now it is some other kind of work – all of it very noisy and right outside the window of my second floor flat. It is unbearable.”

The source of the noise she refers to is the ongoing work of the Mumbai Metro Line 3 project which has taken over large swathes of the city since 2017. The digging up of streets, the cutting of trees, the slow-moving traffic and of course, the noise – all of it are causing hardship to citizens like Menezes (who declined to give her real name because “I live alone.”) To get away from all this, she went away on a two-month long break with her daughter in the US, but, of course, not everyone has an escape route like that.

The incessant noise during the day and sometimes at night by large machines pounding the earth has proved to be a nightmare for residents living along the construction site which runs 33.5 kilometres from south to north of the city. The noise is well over the permissible decibel levels.

Resident welfare associations and environment activists have been petitioning the Mumbai Metro Rail Corporation Limited (MMRCL) and its partner company Larsen and Toubro and the Bombay high court provided some succour when it ordered that noisy night work be halted.

However, that might change soon, as the government has now appealed for lifting the stay and allowing work during night times too.

On June 22, the state government had filed an affidavit seeking permission to carry out the work round the clock for a “limited” period of two years. This work would be carried out in Cuffe Parade, Churchgate and Girgaum, which are mainly residential areas in the southern part of Mumbai city.

The government’s advocate general Ashutosh Kumbhkoni had urged the court to permit the work non-stop since tunnel boring machines have to be installed and require to be manned round the clock. “Once the machine is lowered underground, then it cannot be stopped as it might result in untoward incidents like a building collapse. Only the transportation of parts of the machine would cause noise, but once it is assembled and lowered underground, no noise would emanate,” Kumbhkoni had claimed in the court.

Environmental rights activists, however, are of the opinion that none of these proposals have taken the local residents into consideration. In fact, one of the issues that citizens have is that public outreach by the MMRCL has been lacking and there is no one they can turn to for clarifications or to file a complaint. Often, local residents call the police late at night requesting that they ask for the noisy work to be stopped. (MMRCL did not respond to this reporter’s request for answers.)

The original stay was imposed when a petitioner Robin Jaisinghani, a Cuffe Parade resident who lives within 50 metres of the Metro work pointed out that noise from Metro 3 construction has been exceeding the safety limits under the rules. “There are no fixed hours during which construction activity is to be carried out. Sometimes, construction activity is carried out till midnight and sometimes even later, into the early hours of the morning, making it impossible to carry out any normal activity.”

According to Noise Pollution (Regulation and Control) Rules, 2000, residential areas should have a maximum noise level of 55 decibels (dB) in the day and 45 dB at night. Similarly, for the silence zones – areas around schools, hospitals and religious shrines – maximum permissible noise level is 50 dB in the day and should drop below 40 dB at night. However, two surveys conducted in the month of April at Mahim in central Mumbai and Churchgate in the south have shown that the noise level has almost been double the permissible limit, ranging from 88 to 97 dB at Mahim and 93.8 dB in Churchgate, far beyond tolerance levels. These readings, says environmentalist Sumaira Abdulali were recorded from a distance, but the results were still this high.

Mallica Hingorani, a 62-year-old resident of Girgaum, told The Wire that the stay means very little to the lives of the residents. “The MMRCL’s petition would appear as if they have been abiding by the rules and carrying out work only within the permissible hour and noise limits. This is completely untrue. Only those staying here will be able to tell you that the work this area is a living hell for us residents.” Hingorani’s complaint resonates with others too. Several, who were able to afford an alternative accommodation, have moved to the suburbs where the work doesn’t impact their routine. Not everyone has that choice.

Other problems have emerged too – the Parsi community is agitated because the Metro will pass under its sacred temples, some residents have complained about cracks in their buildings and many businesses, including shop fronts, have been made inaccessible by the barriers that have been erected around the construction. While some of these can be tackled, the noise has become a sensitive point that has got residents worked up. “In no other city would the authorities be so callous about the daily discomfort they are causing – I am sure noise reduction technology is available that could have been used,” says Menezes.

The 33.5 kilometre long Metro 3 is an ambitious project that is budgeted to cost Rs 23,165 crores, of which Rs 13,235 will come from a loan provided by the Japanese International Cooperation Agency.

The other end of the project work which is carried out in central and north Mumbai has also been affected. Along the Prajapur Pada in the quiet and sylvan Aarey forest where work has just started, the noise emitted has left the residents restless. Here, activists have also been fighting the agencies constructing the Metro arguing that since Aarey is forest land, it should be spared and an alternative location be found to build the car shed that is required. “We think this is the first step towards finishing off the tree-covered Aarey forest, which is like a green lung for the city and then erecting concrete structures,” says D. Stalin of the environment action group Vanashakti.

Aarey is spread over 3,166 acres and is largely untouched by development, barring a few pockets of slums, old tribal hamlets, cowsheds and a few buildings that are part of an old government milk production complex. Decades ago, one housing complex managed to get official permission but since then no other buildings have come up. Environmentalists fear that all of this will go if the shed is built there.

The Wire tried to elicit a response from MMRCL on the various concerns that have been raised by the citizens’ groups. However, spokesperson Sukriti Kumar said that she was not able to get the officials to respond to the queries raised. “I would suggest you to go ahead with the story,” she said.

Last month, the MMRCL had submitted a report by the National Environmental Engineering Research Institute which shows that the average noise level in Mumbai is currently at 80 decibels. MMRCL claimed it would adhere to the noise pollution rules and not contribute any further to it.

The MMRCL and L&T have been trying to bypass the noise pollution rules on several technical grounds. Kumbhkoni on June 29 had claimed in court that the Environment Protection Act and the Noise Pollution Rules did not apply to the metro rail project. The court, however, disagreed and said the MMRCL would have to adhere to the rules. “Under Article 21 of the Constitution of India, a person has the right to pollution-free environment which includes noise pollution. What safeguards do you (MMRCL) have in place to ensure this right of citizens is protected,” Justice Oka had asked. Both the Bombay high court and the Supreme Court have held in the past that noise pollution violates the Right to Life under Article 21 of the Constitution.

When the court had asked MMRCL and L&T to satisfy the condition before granting permission to carry out work round the clock, the lawyer for L&T had reportedly responded that work cannot be obstructed in any way and those causing any obstruction would be moved out. The lawyer was reproached and asked to withdraw his statement immediately.

Last week, Kumbhkoni informed the court that a toll-free number would be set up for complaints all along the route. The MMRCL has claimed before the court that it will also have an email id to file complaints and to obtain a response within 24 hours. To residents, whose days and sometimes nights are affected by the incessant noise, this is hardly a solution.

Home Vaccination for Bed-Ridden People In Mumbai From August 1: Maha To HC