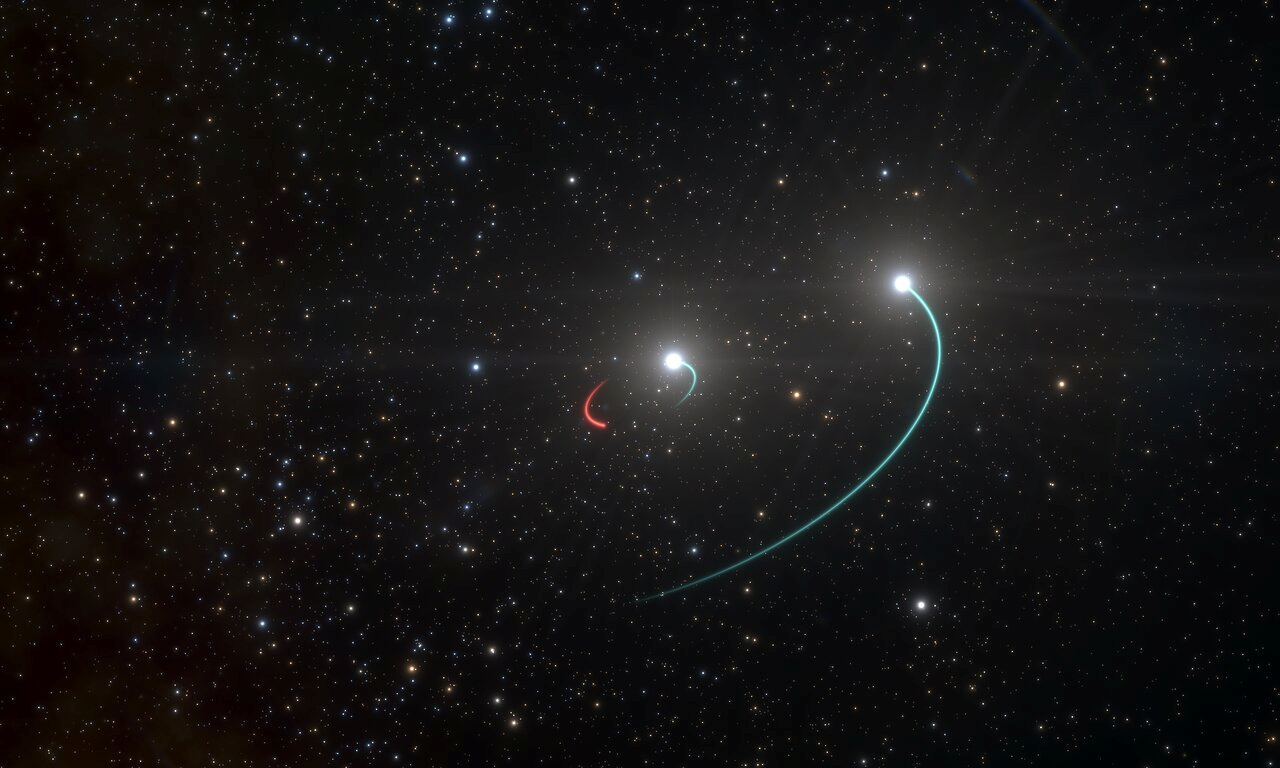 What We Know About Whom COVID-19 Kills

Featured image: An artist’s impression depicts the orbits of the two stars and the black hole in the HR 6819 triple system, made up of an inner binary with one star (orbit in blue) and a newly discovered black hole (orbit in red), as well as a third star in a wider orbit (also in blue), in this image released on May 6, 2020. Photo: ESO/L. Calcada/Handout via Reuters

Washington: Astronomers have spotted the closest black hole to Earth ever discovered and are surprised about its living arrangements – residing harmoniously with two stars in a remarkable celestial marriage that may end in a nasty breakup.

The black hole, at least 4.2 times the mass of the sun, is gravitationally bound to two stars in a so-called triple system roughly 1,000 light years from Earth, researchers said on Wednesday.

A light year is the distance light travels in a year, 5.9 trillion miles (9.5 trillion km).

Black holes are extraordinarily dense objects possessing gravitational pulls so powerful that not even light can escape. Some are monstrous like the one at our galaxy’s centre 26,000 light years from Earth that is four million times the sun’s mass.

Also read: A Surprisingly Big Black Hole Might Have Swallowed a Star From the Inside Out

Garden variety so-called stellar-mass black holes like the newly discovered one have the mass of a single star. This one probably began its life as a star up to 20 times the sun’s mass that collapsed into a black hole at the end of its relatively short lifespan.

This triple system, called HR 6819, can be seen from Earth’s southern hemisphere with the naked eye, in the constellation Telescopium. Until now, the closest-known black hole was one perhaps three times further away.

Only a few dozen stellar-mass black holes previously were known. But there may be hundreds of millions or even a billion of them in the Milky Way, said astrophysicist and study co-author Petr Hadrava of the Academy of Sciences of the Czech Republic.

This black hole, detected using an observatory in Chile, is minding its manners and has not shredded its two partners: stars about five or six times the mass of the sun. At least not yet.

“The formation of a black hole is a violent process, and most models would not have predicted a triple system could survive that but rather would fly apart,” Rivinius said.

The black hole forms a pair with one of the two stars, as near to one another as the Earth is to the sun. The other star is much further away, orbiting the pair. This star spins so rapidly that it is misshapen, bulging at the equator.

The two stars are sufficiently distant from the black hole that it is not pulling material from them. But in a few million years the closer star is expected to grow in size as part of its life cycle.

“What happens then is uncertain,” Rivinius said. “The most spectacular outcome would be if the black hole ends up with that star inside it.”

The Wire Science@TheWireScience
3 Following 15.2K Followers
The Soyuz MS-17 spacecraft carrying NASA astronaut Kate Rubins, a microbiologist who in 2016 became the first perso… https://t.co/0ma905Hj8x
18 hours ago
1
The visionaries like Vikram Sarabhai and Govind Swarup who conceived of great projects are well known in India. S… https://t.co/EtGL3sN5fG
19 hours ago
1
India’s response to its new COVID-19 epidemic is going through an inflexion. It was most prominent when the govern… https://t.co/8YQ9HqOzi3
20 hours ago
3 8
India is likely to receive an average amount of rain in the 2021 monsoon, the state-run weather office said, raisin… https://t.co/SJBN2z2VvB
21 hours ago
1 3
The Centres for Disease Control and Prevention recommends that everyone – vaccinated, recovered or otherwise – wear… https://t.co/X9HhFNoZfo
22 hours ago
5
Search operations are still underway to find those declared missing following the Uttarakhand disaster on February… https://t.co/EMW5f6UfFx
23 hours ago
1 2
The city’s main Muslim graveyard for victims of COVID-19 is running out of space, according to authorities, as case… https://t.co/IWg1hYYU0y
24 hours ago
1 3
As scientists and advocates call to keep carbon in the ground, a mainstay of obtaining more oil in southwestern US… https://t.co/Ag5evOQuak
1 day ago
4
There is consistent, strong evidence to prove that the SARS-CoV-2 virus, behind the COVID-19 pandemic, is predomina… https://t.co/TB3a9XKiKp
1 day ago
4
What does the current wave spell for the weeks ahead? In a conversation with @MitaliLive, Professor Srinath Reddy… https://t.co/pcToIe0T3W
1 day ago
7 16
“They are dragging the bodies like animals from the mortuary to the truck and then from the truck onto the funeral… https://t.co/KKbwMlOuLj
1 day ago
2 5
“More than one year into the COVID-19 pandemic, the failed response in Brazil has caused a humanitarian catastrophe… https://t.co/1iik1nOksF
1 day ago
2
"The speed with which infection has spread means that health systems are being overwhelmed, leading to avoidable de… https://t.co/cHdz4hiTQE
1 day ago
3
During the first wave, reports of large-scale underreporting appeared from across the country. Although this surg… https://t.co/n1wtAYUZ6x
2 days ago
1 3
Some social psychology models have found that carefully designed communication strategies can harness self-interest… https://t.co/7dWnIMSnXN
2 days ago
1
Contact us