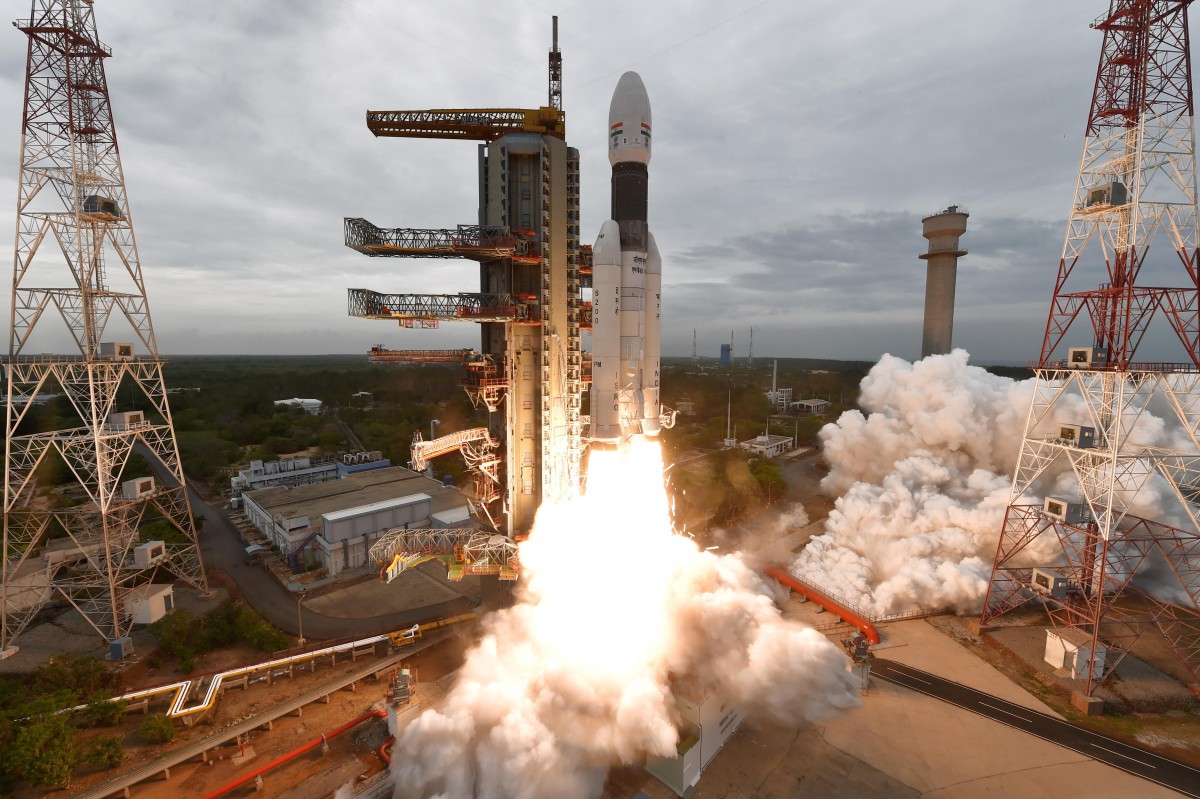 Canada Next on Hurricane Dorian’s Route

About 2 km above the Moon’s surface, the Vikram lander of the Chandrayaan 2 mission lost contact with ground control.

On September 5, it had separated from the lunar orbiter and entered a 35 km × 101 km orbit after the first lunar burn. Vikram began its landing burn on September 7, between 1 am and 2 am. However, shortly before 2:30 am, the lander’s trajectory appeared to deviate from what was nominal even as ISRO scientists lost their communications link with the machine.

Notwithstanding this brutal reminder that space is hard, Vikram’s ’15 minutes of terror’ – as it descended carefully and autonomously over the Moon’s surface – was poised to decide if the mission was successful or not. This prompts the following question: What is success?

It has always been clear that if Vikram aced the landing, there would be glory for India together with a frenzy of congratulatory messages on the social media as well as a considerable amount of muscle-flexing.

But now that we know the landing did not succeed, would we call Chandrayaan 2 a failed mission? No. Doing so wouldn’t have been fair to the technological achievements that have allowed the spacecraft – and India with it – to come all the way up to the Moon.

Also read | ‘There Is No Communication With the Lander. It Is as Good as Lost. There Is No Hope.’

Quite apart from the first, and successful, operational flight of the GSLV Mk III rocket, which put the spacecraft in orbit around Earth, there are the orbit-raising burns, the cis-lunar burn, the lunar capture burn, the lunar orbit burns and now the Vikram lander burns that demonstrate mastery over propulsion, guidance and navigation technologies. That the health of all of Chandrayaan 2’s components is good is a tribute to ISRO’s having successfully ensured the long-term survivability of systems in a hostile environment.

A camera on board the orbiter regaled us with stunning pictures. With a resolution of 30 cm, it is perhaps the highest resolution camera orbiting the Moon. These pictures were relayed to Earth, where ISRO scientists reaffirmed the suitability of the preferred landing sites. Once they made their decision, they relayed the data to the lander via the orbiter. The lander then analysed the landing site and autonomously initiated the landing burn with four thrusters located at four corners of the lander.

Since these engines will have kicked up dust that could have degraded the lander’s sensors, the burn ceased before the actual touchdown. All had gone well until this so-called braking phase. The lander’s actual trace overlapped with its predicted path.

Then, with a centrally located fifth thruster and the sensors’ assistance, including a millimetre-wave altimeter developed from start to finish in India, Vikram attempted to gently guide itself onto lunar soil. This is when something went wrong. At about 2.1 km above the surface, the trajectory deviated and the descent speed increased, and soon after the signal from the lander was lost. The lander would have been about a kilometre above the surface at this point.

The orbiter is expected to go strong for at least two years, and beam back useful information about the Moon. Its dual-frequency synthetic aperture radar, which will search for water, is a marvel of miniaturisation that weighs only 16 kg. A similar instrument will be employed onboard the upcoming NISAR mission, developed jointly by ISRO and NASA. The imaging infrared spectrometer (IIRS), which will capture spectroscopic images of the Moon, is another completely Indian effort, from the sensor to the all-important grating that enables a spectral resolution of 20 nanometers. The terrain mapping camera will complete what Chandrayaan 1 started by creating a 3D map of Earth’s satellite.

Let us adopt a speculative outlook at this juncture and assume Vikram had successfully landed on the Moon, releasing the Pragyan rover onto the Moon’s surface. The robots would then have commenced a series of experiments to be undertaken over the next 14 Earth days, or one lunar day. This duration was determined by the fact that the intense cold of the lunar night would likely have killed off the robots’ batteries and rendered the duo inoperable.

Also read | A Peek Into the Life and Work of Ritu Karidhal, Chandrayaan 2 Mission Director

The rover, designed to travel at the majestic speed of 1 cm/s, was also required to be within 500 m of the lander because that is the maximum distance over which the two could have communicated. The rover’s communications would have had to be relayed by the lander to the orbiter or to Earth. Pragyan couldn’t have communicated directly with the antennae on Earth.

The question automatically arises as to what ISRO plans to do after Chandrayaan 2, which for now appears to be limited to the orbiter alone. It must be said the orbiter is bristling with instruments and all are in working condition. We can look forward to at least a year of immensely useful data, if not more. However, reaching and establishing a presence on the Moon’s surface has to be the ultimate goal.

The organisation has to be committed to planetary exploration, in particular to the Moon, which is fast emerging as the planetary equivalent of Antarctica. Despite the Moon Treaty’s proclamation that the Moon and all celestial bodies are the heritage of all humankind – which sounds a bit presumptuous as there could be other intelligent life in the universe — we do anticipate that countries will attempt to colonise the Moon as they did Antarctica in the 20th century.

There is a distinct possibility that various national space programmes will establish bases on the Moon ostensibly for scientific purposes but whose activities will include mining and supporting the exploration of more distant bodies, including Mars. India cannot be left behind.

For this, ISRO has to consider commissioning a ‘Chandrayaan 3’ mission ASAP, incorporating the lessons from the analysis of Vikram’s descent data. This is not as difficult as it may seem because, in such critical missions, there is usually a backup that can be made flight-worthy.

To be able to establish at least a semi-permanent base on the Moon, India has to take several steps. First, for all its ‘Bahubali’ image, the Mk III only managed to place the 3.8-tonne Chandrayaan 2 in Earth orbit. Chandrayaan 2 later used its engines to raise itself into a cis-lunar orbit. So ISRO should develop a heavy-lift launcher along the lines of the Delta IV Heavy operated by the United Launch Alliance, at least for a higher payload capacity and the ability to place 10,000-kg payloads directly in a trans-lunar injection (TLI) orbit.

Europe, China and the US are working on rockets that can lift 8-40 tonnes into TLI. The feat is eminently possible: the human-rated Saturn V rocket NASA used for the Apollo missions 50 years ago could place 48.6 tonnes in TLI.

Replacing the Mk III’s second-stage liquid engine with a semi-cryogenic engine (fuelled by kerosene + liquid oxygen) could increase the payload capacity by about 1,000 kg. ISRO has been working towards this with its SCE 200 model; it is also set to purchase a set of semi-cryogenic engines from Russia, modelled on the Ukrainian RD-180 engines, for this purpose. Increasing the amount of fuel used in the rocket’s upper cryogenic stage (liquid hydrogen + liquid oxygen) will also help. In all, India needs a human-rated launcher that can perform a TLI.

That said, ISRO’s human spaceflight programme is probably too late to help with the Moon-base race. Instead, it should bank on robotics and autonomy, scientists’ command of which Chandrayaan 2 has demonstrated, and try to set up a semi-permanent robotic base. The planned lifespans of Vikram and Pragyan were too short for scientists to contemplate any long-term investigation. The next landers and rovers we build must be able to survive for longer by using radioisotope heaters. Then, once the human spaceflight programme has matured, ISRO can augment its base with humans.

We also need to factor in the growing Indian private space operations sector. Apart from big operators like Larsen & Toubro, there are also a host of startups working with space technologies and applications. ISRO has recognised this by floating a venture called New Space India Ltd. to interact with this sector. India’s plans for the Moon can benefit from collaborations with these companies by offloading its systems to them.

However, India needs a well-defined Space Activities Bill to encourage the sector to grow by charting their paths out in legal terms. The first version was too bureaucratic and suspicious of the private industry, and has since been modified. Hopefully, the Department of Space will get its act together and draft a more encouraging bill.

Even with Vikram’s fate in the picture, India’s standing in space has shot up in the global arena. ISRO’s successes with its PSLV and GSLV rockets, and the Mars Orbiter and Chandrayaan missions, together with the chutzpah it exhibited in conceptualising and realising robotic lunar missions, has turned the world’s attention on India.

It wasn’t only Indians; many scientific organisations around the world arranged for watch parties to follow Vikram’s landing. The reactions to the setback have been positive and encouraging, both in India and elsewhere. India should cash in on this goodwill. It should move ahead with the successor to Chandrayaan 2 and modifications to the Mk III. It should join hands with Indian industry and launch collaborative programmes with other countries to explore the Moon and make way for India’s presence there.

Arup Dasgupta is the managing editor of Geospatial World and former deputy director of the Space Applications Centre, ISRO. This article was produced and published jointly by The Wire and Geospatial World.