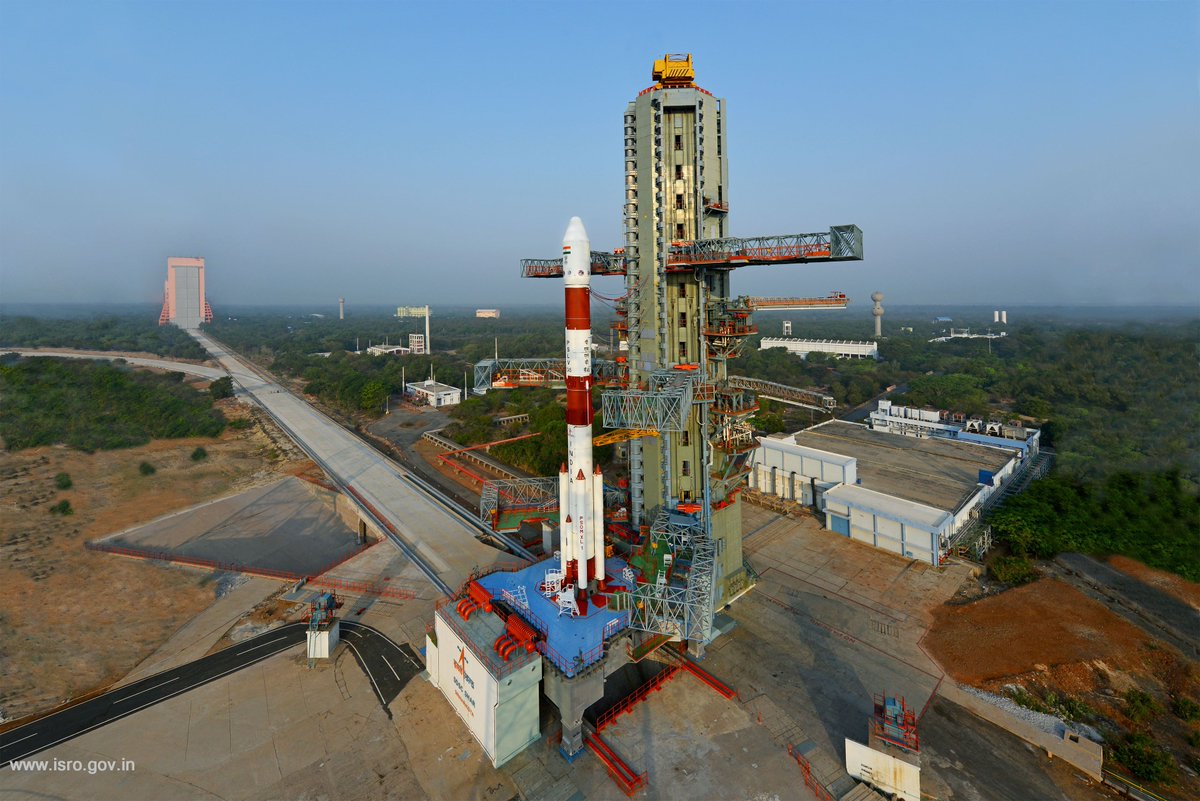 As the 27-hour countdown concluded, the nearly 50-metre tall rocket, a new variant of ISRO’s trusted work horse PSLV-QL, blasted off from the second launch pad at the spaceport of Sriharikota at 9:27 am.

The EMISAT satellite is aimed at electromagnetic measurement.

The mission marks several firsts to the credit of the space agency as it will manoeuvre satellites in various orbits and orbital experiments, including on maritime satellite applications.

According to ISRO, a new variant of the rocket PSLV-QL equipped with four Strap-On motors in the first stage is used for the launch.

PSLV, also used in India’s two key missions, Chandrayan in 2008 and Mars Orbiter in 2013, is a reliable and versatile launch vehicle for ISRO with 39 consecutive successful flights till June, 2017 and five in a row from January 2018.

The rocket has encountered only two failures so far; its maiden developmental flight ended unsuccessfully way back in 1993.

In September, 2017, the flight went off without any hitch but the IRNSS-1H Satellite could not be released into orbit after the PSLV-C39’s heat shield failed to open on reaching the orbit.

In this mission, ISRO scientists will place the satellites and payloads in three different orbits, a first for the agency.

After injecting the 436 kg primary satellite EMISAT, intended for electromagnetic spectrum measurement, at around 17 minutes from lift off in a 749 km orbit, they will restart the fourth stage again.

ISRO said this was the first time it has been envisaged to provide a micro-gravity environment for research organisations and academic institutes to perform experiments.

The PS4-fourth stage hosts three payloads in this mission.

The other 28 international satellites – 25 3U type, two 6U type and one 2U type nano satellites – are from Lithuania (two), Spain (one), Switzerland (one) and the United States (24).

All these satellites are being launched under commercial arrangements, the ISRO said.

The Wire Science@TheWireScience
3 Following 26.4K Followers
As vaccines induce a T-cell response against a diverse set of epitopes, it’s likely they will still provide compara… https://t.co/FcVaoG71Bd
6 hours ago
The Rajya Sabha was told that as much as 96% (101.27 crore) of the total COVID-19 vaccine doses administered since… https://t.co/fLN16vAbSw
7 hours ago
1 1
While the Outer Space Treaty offers broad principles to guide the activities of nations, it does not offer detailed… https://t.co/kT06EXlRLn
8 hours ago
1 3
Climate scientist Katharine Hayhoe emphasises honest, one-on-one communication: “Have a conversation about somethin… https://t.co/S3KECoKIbn
9 hours ago
Its closest evolutionary connection appeared in April 2020, which suggests the variant evolved over an extended per… https://t.co/e18hL26fxV
10 hours ago
1 2
An international team has attempted to quantify the extent to which nepotism – the practice of favouring one’s frie… https://t.co/ui8ApCoL1i
22 hours ago
3 4
The NCDC also claimed to have no information about how much money had been allocated for the sequencing programme n… https://t.co/7cZflDKhnV
23 hours ago
1
Without a bridge to the mainland, the residents of Sagar Island wait for a single 'water ambulance' in a health eme… https://t.co/7ABa5mTQdq
24 hours ago
1 4
Scientific publishing is an important part of doing modern science. The scientific literature is expected to be an… https://t.co/970uyfOLVD
1 day ago
3 3
Despite its contributions to thinking about climate change, ‘Deep Adaptation’ has a weak premise at its core: that… https://t.co/9PTfhst0hm
1 day ago
2
Buddhist legends focused on northeastern India from the fourth and third centuries BCE recount the army of automata… https://t.co/vscKNXyWcN
1 day ago
A legal fight between the US National Institutes of Health and Moderna over COVID-19 vaccine patents shows that whe… https://t.co/FWceveWUIe
1 day ago
1
The mutations also indicate that omicron may have reduced sensitivity to antibody activity induced by past infectio… https://t.co/OUUjdDUvJB
1 day ago
1
Climate scientist Katharine Hayhoe's new book contains plenty of science – but she is well aware that inundating pe… https://t.co/lIZxQyQcvN
1 day ago
2
The omicron variant is not a descendant of any of the existing VOCs; instead, it appears to have descended directly… https://t.co/ZspdFVjJnr
1 day ago
1 5
Contact us