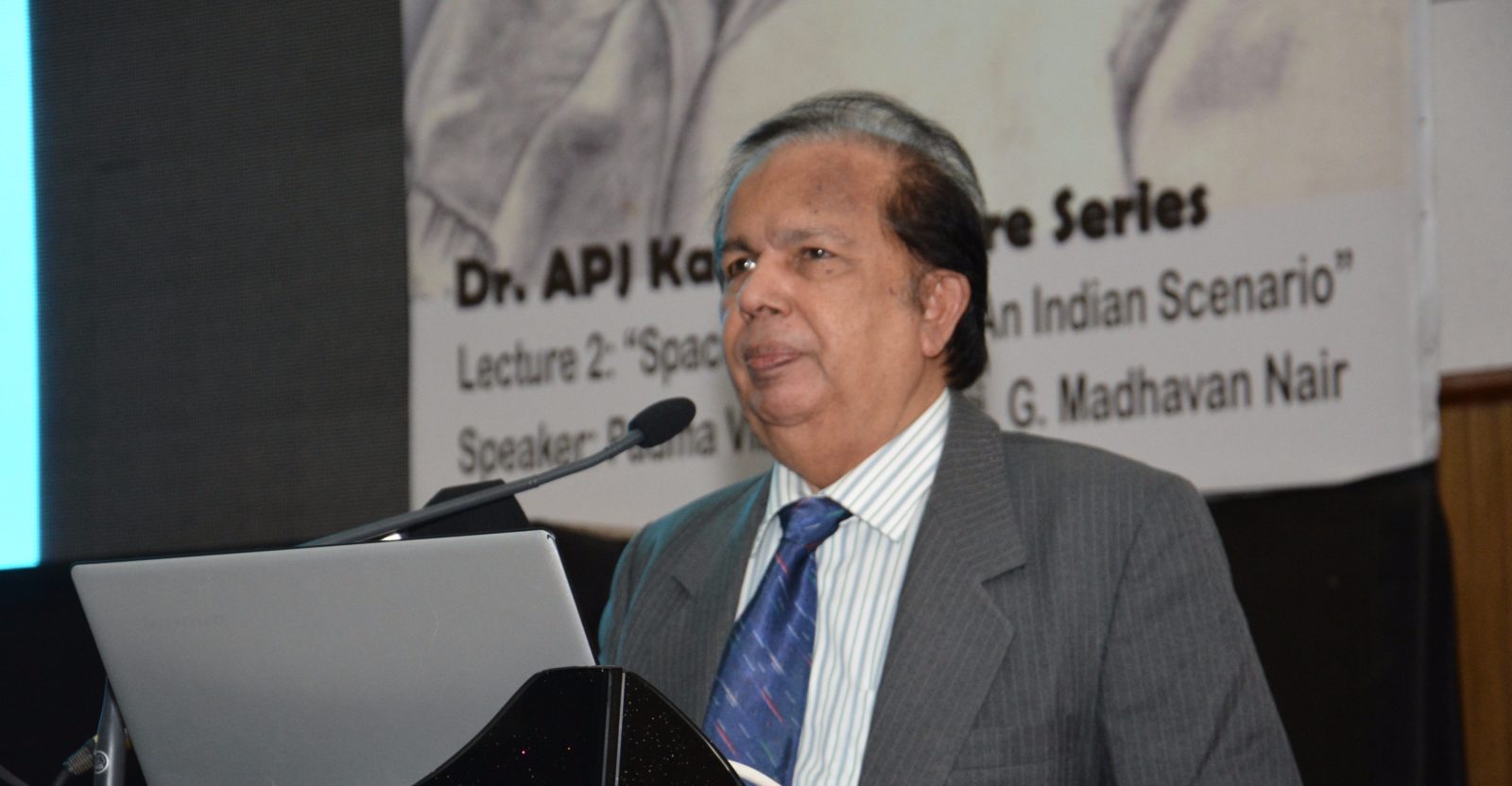 Bengaluru: Veteran space scientist G. Madhavan Nair has warned against structural changes in the Indian Space Research Organisation (IRRO), as he sought to draw similarities between the space agency and Elon Musk’s SpaceX in terms of having a unified command for delivering efficient performance.

Nair, a former chairman of ISRO, said some recent media reports project an alarming picture about Indian space programme on its ineffectiveness vis-à-vis industrial participation and an idea of possible restructuring to bring about more expansion.

“The public has the right to know the factual situation considering the evolution and growth so far,” Nair said.

According to him, ISRO is the best performing government organisation that has mastered many sophisticated space technologies indigenously as well as has provided space missions in a timely manner, meeting ground-level requirements as well as security needs.

It’s the far sighted approach which has enabled India to get a front seat among the global space players, added said.

“India had undertaken planetary missions to the Moon and Mars as well, not leaving out Indian constellation for navigation satellites. All these were accomplished on a shoe-string budget.”

India’s annual (space) budget is slightly above $1 billion, compared to China’s approximately $3 billion and the US’s $25 billion, he said.

The government recently said the private sector would be allowed to use ISRO’s facilities and assets and provided a level-playing field in satellites, launches and space-based services.

“Lot of hue and cry is made on industry participation,” said Nair, during whose tenure of six years as Chairman of ISRO and Secretary in the Department of Space 25 successful missions were accomplished, told PTI on Tuesday.

<>Right from SLV3, ISROs first satellite launch vehicle (more than four decades ago), onwards, industry had shared the production responsibility and today even the cryogenic engine is manufactured by industries.

“Nearly 60% of ISRO’s budget is spent through industry. The fact that the space agency’s manpower is stable around 17,000 over the last two decades while the number of missions grew by a factor of 10 is a proof of effectiveness of industrial policy in space activities,” he underlined.

As a next step for enabling industry to take up full system realisation, the new entity NSIL (NewSpace India Limited) was formed nearly a year back and it is progressing well, Nair noted.

Even in the USA and other countries, secrecy and security norms are stringent in the launch vehicle sector.

Nair said the SpaceX is marvelled as a success story in private space launch vehicle development and it is really so as he recalled the history of the space programme in the US.

After space shuttle failure and retirement, the US space agency NASA was going rudderless on new vehicle development, he said, adding, its industrial partners came up with a USD five billion project to provide a new launcher for manned missions.

In fact this was the opportunity Musk captured taking personal initiative and with his own funds to develop a man-rated vehicle. He did that too extremely well over a 10 year period at one fifth the cost projected by NASA.

“If you study carefully, it is the mismanagement of NASA programmes which led to the success of a private player. It is interesting to note the similarities of Elon Musks SpaceX and ISRO.

Both have a unified system under single command and under a single roof design/production concept. Only very small items or parts available commercially are subcontracted.

This is exactly what ISRO has been following all these years. SpaceX claims that this is the single factor which led to cost cutting substantially compared to the NASA model,” Nair elaborated.

SpaceX, he said, had spent nearly USD 800 million as development cost and offering launch at about 11,000 USD per kg. In India, ISROs GSLV Mk3 (launch vehicle) is the same class and of course, without booster recovery.

“Still our development cost was around 300 million USD and payload delivery cost is around 5000 USD per kg, less than half of the US competitor. SpaceX had captured nearly one billion USD orders.

Can any Indian industry or start-ups make use of this opportunity to get at least a hundred million USD business for launch even after developing a launch vehicle? Instead of crying foul all the time, industry should take up such challenges as done by SpaceX,” Nair said.

ISRO is not behind anybody else in advanced technology.

But the UPA2 had put off many of these activities, he alleged.

“It was after Modiji took over (as Prime Minister), ISRO’s plans were put back on track including approval of manned space mission. Now, ISRO is roaring ahead with full steam on the newly approved plans.”

“This is the time in which lots of statements are made about structural changes in ISRO.

Immediate question is, what for? All recognise that both the Department of Atomic Energy and Department of Space have a unique structure of overall management by an empowered commission with full delegated powers.”

“The special feature of this system is that both the Commission and Department are headed by a carefully selected technocrat. This is the single reason that both these departments are performing most efficiently.

One can’t expect perfection in all respects. If there are specific deficiencies it has to be analysed and fixed rather than breaking up the top most performer based on false tall claims,” he said.

Nair said all the noises made by a few private players and start-ups (calling for structural changes in ISRO) were without understanding Indian and global scenario.

“Perhaps one wonders whether it is vested interests trying to de-motivate ISRO, which is putting up an exemplary performance.”

The Wire Science@TheWireScience
3 Following 26.1K Followers
The international treaty that phased out the production of ozone-depleting chemicals has prevented between 0.65°C a… https://t.co/VgnTa9Fgap
7 hours ago
1
“Even paying much for your death in Russia can’t save you from being a part of the criminal conflict.” On Septembe… https://t.co/WzR8BRihwi
8 hours ago
1
"Global immunity requires solidarity, so hoarding cannot exist in the face of others’ needs. Some countries have a… https://t.co/TPZfIAORmV
9 hours ago
1 2
Stating that in Kerala, in the last three weeks, hospital admissions have declined by 24%, ICU and ventilator requi… https://t.co/e5xIUk03rG
10 hours ago
Bihar performed the best among all the states in administering COVID-19 vaccines on PM Modi's birthday. As per a n… https://t.co/OsLcVIvWJn
11 hours ago
1
According to a New York Times report, the ICMR suppressed data that contradicted the government’s rosy predictions.… https://t.co/2DNQr8D372
23 hours ago
Clinical trials in India have had a troubled past. In the last ten years, 311 trial participants have died due to… https://t.co/II6bTcyoxg
1 day ago
1
With climate change, the variation in the temperature and rainfall could increase. This is why farmer leaders beli… https://t.co/QDURpLvzJU
1 day ago
Researchers Bhargavi and Chelmala Srinivasulu have been called the Bat Woman and Bat Man of India, not only because… https://t.co/dDlk9oFQAd
1 day ago
2
'The time has come to stop chasing after the last cancer cell and focus on eliminating the first.' In her ‘The Fir… https://t.co/GE64gzmWAZ
1 day ago
1
"AYUSH let the cat out of the bag: claim the seal of approval of science to push its remedies, and claim incommensu… https://t.co/vsUb0PEMgW
1 day ago
1
Even low concentrations of particulate pollution are harmful to human health, so it’s not clear why the WHO has shi… https://t.co/I0iJktgjfU
1 day ago
2
Exaggerating the deadliness of wildfires props up the myth that wildfires are invincible. We must acknowledge that… https://t.co/Bur8jTofso
1 day ago
3
Creating an MSP regime that incentivises climate-appropriate crops would require a state-led process, or one where… https://t.co/Qiwczl8yoP
1 day ago
2
Across Kenya, Sudan, and Ethiopia, weak and feverish patients are being taken to hospitals by their worried familie… https://t.co/qDAton8Qwx
1 day ago
1
Contact us