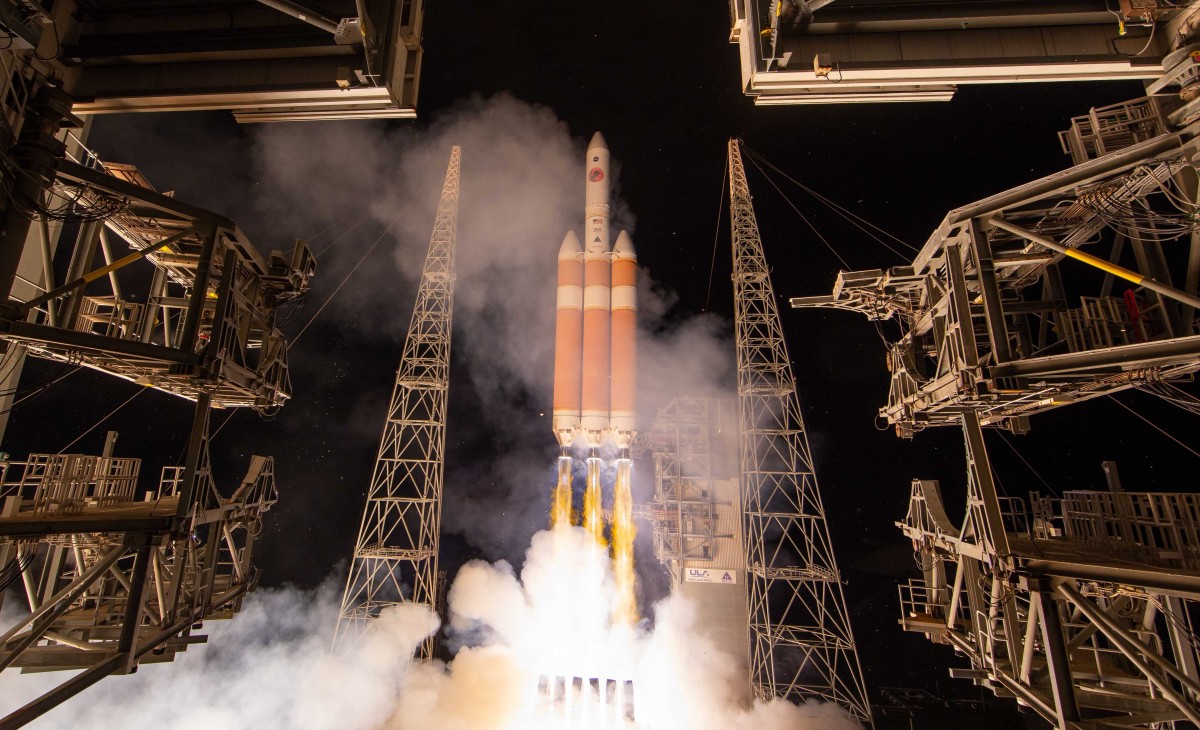 Washington: NASA’s Parker Solar Probe, mankind’s first mission to ‘touch’ the Sun, was successfully launched today on an unprecedented, seven-year-long journey to unlock the mysteries of the star’s fiery outer atmosphere and its effects on space weather.

Lift off for the $1.5 billion mission took place from Space Launch Complex 37 at Cape Canaveral Air Force Station in the US at 3:31 am EDT (1:01 pm Indian Standard Time).

The launch of the United Launch Alliance Delta IV heavy rocket carrying the spacecraft was scrubbed yesterday due to a violation of a launch limit, resulting in a hold.

“The spacecraft is in good health and operating on its own. Parker Solar Probe has begun its mission to ‘touch’ the Sun,” NASA said in a blog post, about two hours after the lift off.

The mission is the first to be named after a living scientist – 91-year-old Eugene N. Parker, who first predicted the existence of the solar wind in 1958.

The heliophysics pioneer watched the liftoff from NASA’s Kennedy Space Centre. A plaque dedicating the mission to Parker was attached to the spacecraft in May. It includes a quote from the physicist, “Let’s see what lies ahead.”

It also holds a memory card containing more than 1.1 million names submitted by the public to travel with the spacecraft to the Sun.

The mission’s findings will help researchers improve their forecasts of space weather events, which have the potential to damage satellites and harm astronauts on orbit, disrupt radio communications and, at their most severe, overwhelm power grids, NASA said.

“This mission truly marks humanity’s first visit to a star that will have implications not just here on Earth, but how we better understand our universe,” said Thomas Zurbuchen, associate administrator of NASA’s Science Mission Directorate.

“We’ve accomplished something that decades ago, lived solely in the realm of science fiction,” Zurbuchen said.

During the first week of its journey, the spacecraft will deploy its high-gain antenna and magnetometer boom. It also will perform the first of a two-part deployment of its electric field antennas.

Instrument testing will begin in early September and last approximately four weeks, after which Parker Solar Probe can begin operations.

“Now, Parker Solar Probe is operating normally and on its way to begin a seven-year mission of extreme science,” said Driesman.

Over the next two months, Parker Solar Probe will fly towards Venus, performing its first Venus gravity assist in early October – a manoeuvre a bit like a handbrake turn – that whips the spacecraft around the planet, using Venus’s gravity to trim the spacecraft’s orbit tighter around the Sun.

This first flyby will place Parker Solar Probe in position in early November to fly as close as 15 million miles from the Sun – within the blazing solar atmosphere, known as the corona – closer than anything made by humanity has ever gone before.

The spacecraft will transmit its first science observations in December, beginning a revolution in our understanding of the star that makes life on Earth possible.

Throughout its seven-year mission, Parker Solar Probe will make six more Venus flybys and 24 total passes by the Sun, journeying steadily closer to the Sun until it makes its closest approach at 3.8 million miles.

At this point, the probe will be moving at roughly 700,000 kilometres per hour, setting the record for the fastest-moving object made by humanity.

At closest approach, the solar shield of the probe will face temperatures approaching 1,377 degrees Celsius.

The spacecraft and instruments will be protected from the Sun’s heat by a 4.5-inch-thick carbon-composite shield, which will need to withstand temperatures outside the spacecraft.

The Wire Science@TheWireScience
3 Following 14.7K Followers
India has provided 361.94 lakh doses of anti-coronavirus vaccines to various countries, out of which 67.5 lakh dose… https://t.co/h4pQguMSBh
6 hours ago
2
International travellers are particularly vulnerable to virulent strains of drug-resistant bacteria – often picking… https://t.co/9vNSfoX14G
7 hours ago
1 2
In October, India and South Africa called on the WTO's Council for TRIPS to recommend that the organization issue a… https://t.co/M6uul6ZrLv
8 hours ago
3
Of the 100 persons in the Coronil study, the average age of the participants was 33-35 years. There are only 4 pa… https://t.co/eFze4qkw1r
9 hours ago
1 1
China’s air quality targets for this year will be set at a slightly higher level than last year’s average, an offic… https://t.co/KcJwz11lZ5
10 hours ago
1 2
Tigers in parts of east and south-east Asia can come in bottled form, sold openly in industrial breeding centres as… https://t.co/OezTkrG6dl
11 hours ago
1
Johnson & Johnson‘s one-dose COVID-19 vaccine appeared safe and effective in trials, the U.S. Food and Drug Adminis… https://t.co/4D4odQF0dh
12 hours ago
1 3
Students across the country are worried by the hike in application fees by NBE for merely appearing in the NEET PG… https://t.co/IaftvQANOK
1 day ago
1 4
A group of academics from around India have signed a statement urging the Delhi high court to rule against three pu… https://t.co/uNMnK7tYkU
1 day ago
3 2
The sale of Coronil tablets of Patanjali will not be allowed in Maharashtra without “proper certification”, state h… https://t.co/BdJvLVzEC6
1 day ago
1
The guidelines issued last month, which are now defunct, noted any virtual conference being organised by a publicly… https://t.co/Y9Jcp7S4jf
1 day ago
Maharashtra on Wednesday witnessed a significant rise in coronavirus cases, with more than 8,000 new infections com… https://t.co/f3k3VXC6mB
1 day ago
India said on Tuesday that mutated versions of coronavirus were not responsible for an upsurge in cases in two stat… https://t.co/enRaLPL9xj
1 day ago
1
The Centre on Wednesday announced that people over 60 years and those above 45 with comorbidities can get COVID-19… https://t.co/kWqWICPGsc
1 day ago
CDSCO asked Dr. Reddy's to submit immunogenicity and safety data after they presented safety profile of phase 2 and… https://t.co/aGLmGEXnUk
1 day ago
Contact us

Perseverance Rover Set for a Nail-Biting Landing on Mars