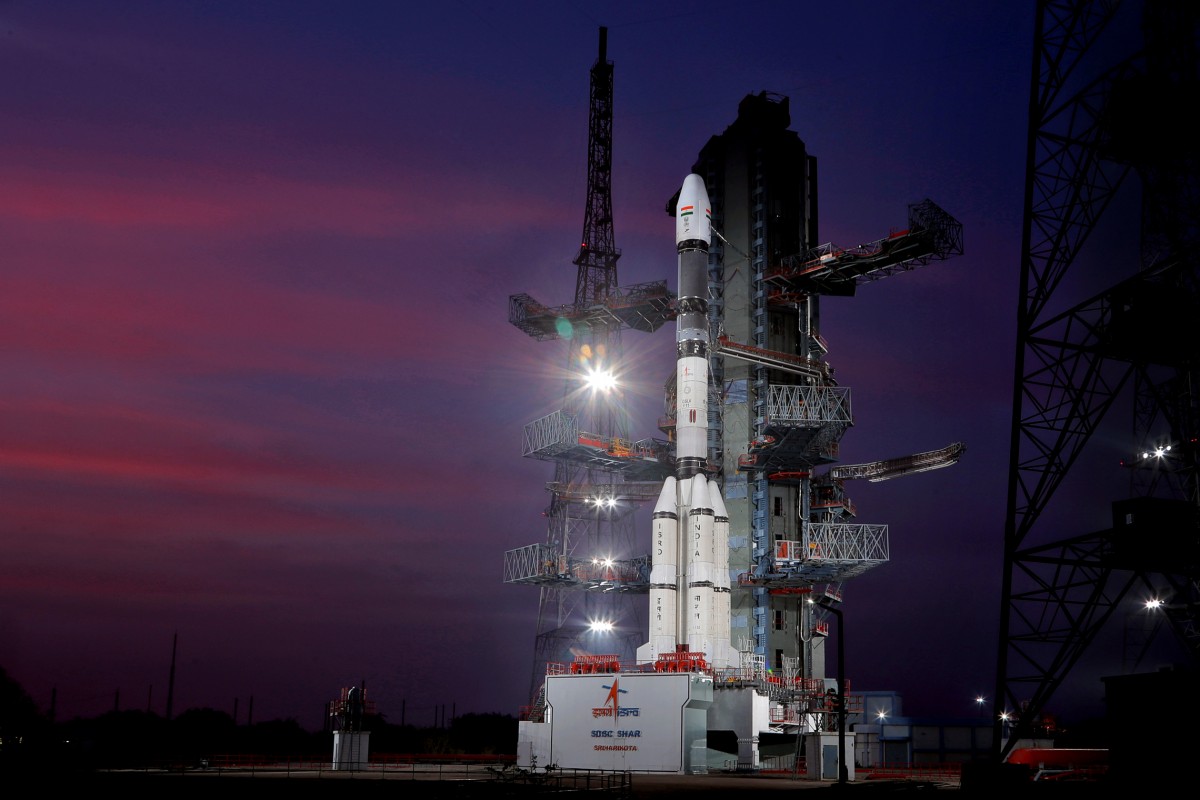 SpaceX is set to make the first test-launch of its human-rated capsule to the International Space Station (ISS) in January. Called the Crew Dragon Demo-1, the it will be uncrewed. If successful, it will be followed by a crewed test flight in June, carrying two astronauts to the ISS.

Boeing, the other company with a NASA Commercial Crew Program contract, has a similar schedule. The first uncrewed flight of its human-rated capsule – the CST-100 Starliner – will be in March, followed by a crewed test flight in August if all goes well.

Assuming both the SpaceX and Boeing missions will be successful, they will mark the return of American astronauts to the ISS onboard made-in-American spacecraft. The ultimate goal is to replace the (retired) Space Shuttle programme and also forgo the increasingly expensive use of Russian rockets.

2. Three Moon missions, all to land

The Indian Space Research Organisation (ISRO) is targeting an early-2019 launch of Chandrayaan 2, its second Moon mission and the first that will attempt to land. Chandrayaan-2 consists of an orbiter, a lander and a rover. The lander will carry instruments like a seismometer and a thermal probe, while the rover will carry spectrometers to analyse the lunar soil (regolith).

(Note: the launch date was updated on January 1, 2019, to reflect an uncertainty on ISRO’s part.)

SpaceIL, an Israeli non-profit, will be launching their lunar lander in the first quarter of 2019 onboard a SpaceX Falcon 9 rocket. If successful, SpaceIL will become the first privately funded entity to achieve a lunar landing. The lander will try to land in an interesting lunar feature called a swirl, which are known to have local magnetic fields.

China is gearing up to launch its Chang’e 5 mission sometime in 2019 – its first lunar sample return mission. Once it lands successfully in a geologically new region on the Moon, the lander will dig 2m below the surface and scoop out two kilogram’s worth of lunar regolith. A capsule carrying the sample will perform an autonomous rendezvous and dock with a return module, which will then bring the sample to Earth.

It is notable that the rendezvous and docking will be practice for a future Chinese crewed mission to the Moon.

3. New rockets in the fray

After a spectacular debut in 2018, the SpaceX Falcon Heavy rocket is set to operate as the most powerful operational launch vehicle in the world. In March 2019, it will attempt to launch the Arabsat 6A satellite to a geostationary orbit. This is a communications satellite intended to provide TV, internet, telephone and secure communication services to customers in the Middle East, Africa and Europe.

But not all new rockets need to be bigger – in fact, the opposite is more true. CubeSats and SmallSats have become increasingly easier to make and operate, so a market for rockets that can deliver such small payloads at a fast pace has arisen.

Rocket Lab has already had two successful commercial flights (this and this) of its Electron rocket, designed specifically to launch SmallSats. The company will also be ramping up its launch frequency to ultimately attain its stated goal of 120 launches a year.

Also in 2019, three more rocket companies are set to enter the arena. The first is billionaire-entrepreneur Richard Branson’s Virgin Orbit. With the successful test-flight of its long-awaited Launcher One craft in December 2018, Virgin Orbit will now aim for a steady launch pace to deliver SmallSat payloads starting as early as Q1 2019.

Vector Launch will also launch their for-SmallSat rocket, the Vector-R, in the same quarter. In December 2019, Firefly’s Alpha 1 will lift off on its first test-flight.

Also notable in this category is ISRO’s Small Satellite Launch Vehicle (SSLV), which will be a smaller cousin to the Polar Satellite Launch Vehicle (PSLV). While the PSLV can lift 3,000 kg to the low-Earth orbit, the SSLV will be able to lift 500 kg. ISRO has said the SSLV’s USPs will be a low cost and faster turnaround time. Its design is ready and the first SSLV test-flight is expected to happen in May, followed by the second one in October.

4. Ongoing space missions, for a science-packed 2019

The New Horizons probe, after its remarkable Pluto flyby in 2015, will now be passing by a Kuiper Belt object (KBO) called Ultima Thule on January 1. This will be the first ever look at a KBO, a giant disc of rocks leftover from the formation of the Solar System, beyond Pluto’s orbit.

On January 3, the Chinese lunar lander Chang’e 4 will attempt to land on the far side of the Moon, the first such attempt in history. Since this part of the Moon is not visible from Earth, Chang’e 4 will exchange signals with mission control on Earth through a communication satellite launched last year. And like SpaceIL’s lander, the Chang’e 4 lander will also descend on a unique, scientifically interesting spot on the Moon: the von Kármán crater.

On to Mars: In February, NASA’s Insight lander will begin studying the red planet’s interior by drilling up to 5m into its surface and measuring the subsurface temperature with a thermal probe.

February will also see the Japanese spacecraft Hayabusa 2 attempt to collect a sample from the surface of the asteroid Ryugu.

On April 4, NASA’s Parker solar probe will make its next close approach to the Sun, followed by two more on September 1 and December 26. Its final close approach, when it enter the Sun’s atmosphere – the corona –, will be in 2024. And to get so close to the Sun, the probe will use gravity assists from Venus, the first of which is slated for December 26, 2019.

The European Space Agency is targeting an October-November launch of its exoplanet hunting telescope, called the CHaracterising ExOPlanets Satellite (CHEOPS). CHEOPS will measure the radii of known exoplanets around nearby bright stars, for which ground-based telescopic surveys have provided mass estimates. Knowing both masses and sizes of exoplanets will allow scientists to determine the planets’ densities and so their composition, like whether they are gaseous or rocky and if they have an atmosphere, etc.

ISRO will launch its GSAT 20 communication satellite in September 2019 onboard Ariane 5 rocket. It will be the first ISRO-made satellite to attempt to move from a geostationary transfer orbit to a geosynchronous orbit using electric propulsion.

In the same month, ISRO will also attempt to launch its Geo-Imaging Satellite (GISAT) 1 onboard a GSLV Mk II rocket. The GISAT is be a geostationary satellite designed to provide imagery during natural disasters on a near-real-time basis.

The Wire Science@TheWireScience
4 Following 26.6K Followers
As electric cars and trucks appear increasingly on US highways, it raises the question: When will commercially viab… https://t.co/4PRFfwdjjM
20 hours ago
Students experienced the vibrations of Earth's auroras, the Sun's flares, Jupiter's bow shock and Saturn's rings in… https://t.co/eqcXekQvmI
21 hours ago
2 4
In a first, amateur aurora chasers brought Steve, a new type of aurora, to the notice of scientists, who discovered… https://t.co/NYh5HBFSQq
22 hours ago
1 3
We should only be authors on papers when we have contributed in a substantive way. That should go without saying, b… https://t.co/XabYPunqo2
23 hours ago
1 1
The active cases have increased to 21,13,365, the highest in 237 days, while the death toll has climbed to 4,88,884… https://t.co/5PJkauK8hQ
1 day ago
An interview with the notable physicist Nathan Seiberg on string theory, particle colliders, physics of the future… https://t.co/D2v080ZanB
1 day ago
3
Because of the scale at which its experiments are conducted and the diverse branches of physics and mathematics its… https://t.co/OUKn7PEwtP
1 day ago
In the summer of 1935, the physicists Albert Einstein and Erwin Schrödinger engaged in a rich, multifaceted and som… https://t.co/L3rSjHho70
1 day ago
1 18
Data tracking has long been a lucrative business model for many corporations. The fact that it also takes place in… https://t.co/g7VOZIQEPr
1 day ago
1
The government has said Repsol spilled some 6,000 barrels of oil into the ocean last week near its La Pampilla refi… https://t.co/x0lAVqpieE
1 day ago
2 7
The curve of any infectious disease outbreak typically has a consistent rising part, a peak and then the declining… https://t.co/uWOu0kYi75
1 day ago
Allowing scientific platforms to promote and propagate pseudoscience can have debilitating consequences for Indian… https://t.co/B1UvB4V09k
1 day ago
1 1
It is now scientifically proven that most of us carry a mother's voice in the neural patterns of our brain: bedtime… https://t.co/GrSvkbCEAo
1 day ago
2
Diseases like Alzheimer's and schizophrenia manifest differently in men and women, and that's important to know. |… https://t.co/YhYYUtu2bI
2 days ago
2 4
Only seven years after birth, the rate at which new neurons are formed in the adult human hippocampus falls by 23-t… https://t.co/LuqCenzMFg
2 days ago
3
Contact us