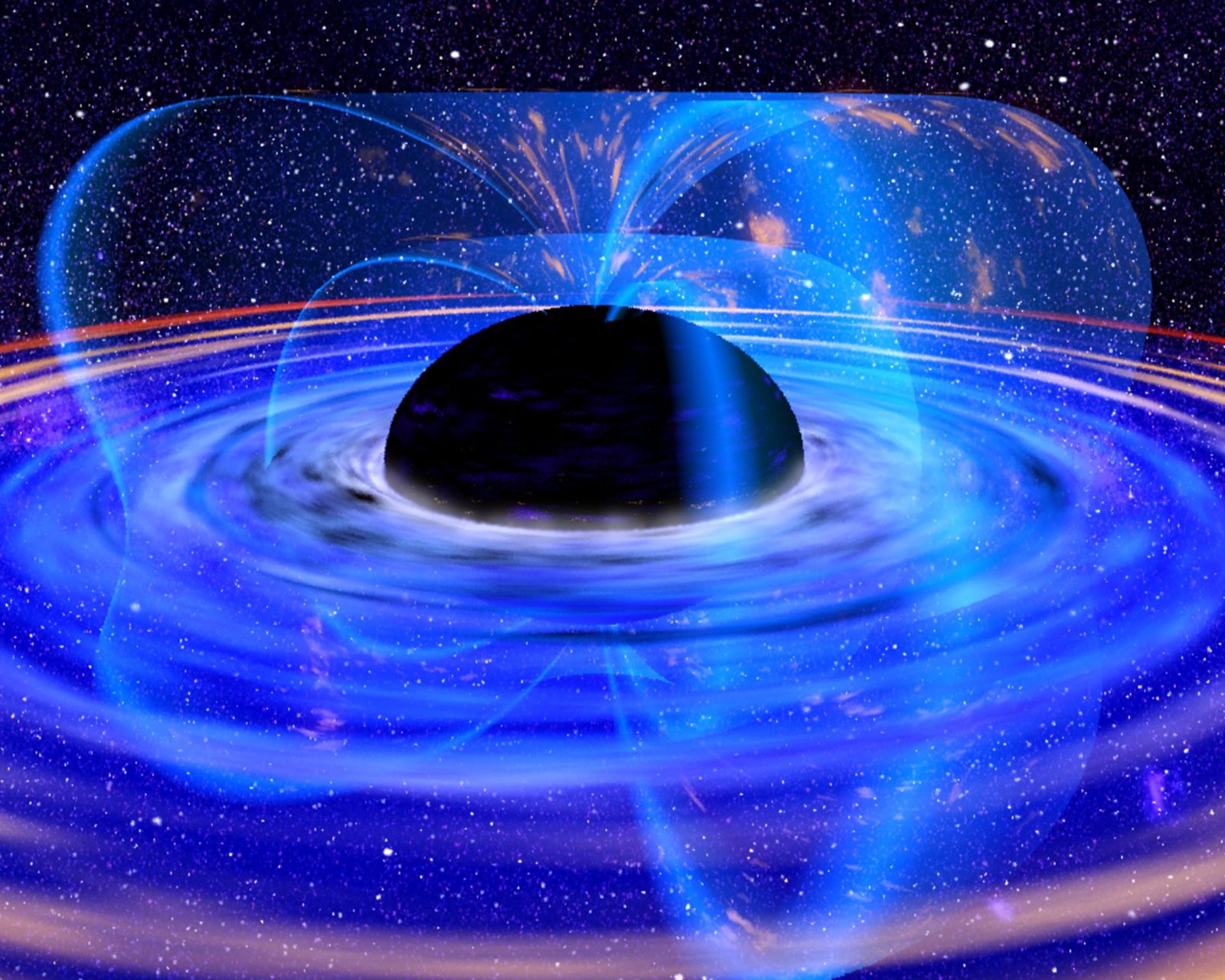 An artist’s impression of a black hole and its accretion disk. Illustration: XMM-Newton, ESA, NASA

Twenty-five years ago, in 1997, an Argentine physicist named Juan Martin Maldacena published what would become the most highly cited physics paper in history (more than 20,000 to date). In the paper, Maldacena described a ‘bridge’ between two theories that describe how our world works, but separately, without meeting each other. These are the field theories that describe the behaviour of energy fields (like the electromagnetic fields) and subatomic particles, and the theory of general relativity, which deals with gravity and the universe at the largest scales.

In 1997, Maldacena found evidence to suggest that a description of quantum gravity in anti-de Sitter space in N dimensions is the same as a conformal field theory in N – 1 dimensions. This AdS/CFT correspondence was an unexpected but monumental discovery that connected two kinds of theories that had thus far refused to cooperate.

The Wire Science had a chance to interview Maldacena about his past and current work in 2018, in which he provided more insights on AdS/CFT as well.

In his paper, Maldacena showed that in a very specific case, quantum gravity in anti-de Sitter space in five dimensions was the same as a specific conformal field theory in four dimensions. He conjectured that this equivalence would hold not just for the limiting case but the full theories. So the correspondence is also called the AdS/CFT conjecture. Physicists have not proven this to be the case so far – but there is circumstantial evidence from many results that indicate that the conjecture is true.

Nonetheless, the finding was hailed as a major mathematical victory for string theory as well. This theory is a leading contender for one that can unify quantum mechanics and general relativity. However, we have found no experimental evidence of string theory’s many claims.

Nonetheless, thanks to the correspondence, (mathematical) physicists have found that some problems that are hard on the ‘AdS’ side are much easier to crack on the ‘CFT’ side, and vice versa – all they had to do was cross Maldacena’s ‘bridge’! This was another sign that the AdS/CFT correspondence wasn’t just a mathematical trick but could be a legitimate description of reality.

So how could it be real?

Actually, in fact, the AdS/CFT correspondence didn’t give rise to this possibility but realised it mathematically. The awareness of the possibility had existed for many years until then, as the holographic principle. The Dutch physicist Gerardus ‘t Hooft first proposed it and the American physicist Leonard Susskind in the 1990s brought it firmly into the realm of string theory. One way to state the holographic principle, in the words of physicist Matthew Headrick, is thus:

This “two-dimensional space” is the ‘surface’ of the universe, located at an infinite distance from us, where information is encoded that describes everything happening within the universe. It’s a mind-boggling idea. ‘Information’ here refers to physical information, such as, to use one of Headrick’s examples, “the positions and velocities of physical objects”. In beholding this information from the infinitely faraway surface, we apparently behold a three-dimensional reality.

In 1915, Albert Einstein’s general theory of relativity provided a set of complicated equations to understand how mass, the spacetime continuum and the gravitational force are related. Within a few months, physicists Karl Swarzschild and Johannes Droste, followed in subsequent years by Georges Lemaître, Subrahmanyan Chandrasekhar, Robert Oppenheimer and David Finkelstein, among others, began to realise that one of the equations’ exact solutions (i.e. non-approximate) indicated the existence of a point mass around which space was wrapped completely, preventing even light from escaping from inside this space to outside. This was the black hole.

Because black holes were exact solutions, physicists assumed that they didn’t have any entropy – i.e. that its insides didn’t have any disorder. If there had been such disorder, it would have appeared in Einstein’s equations. It didn’t, so QED. But in the early 1970s, the Israeli-American physicist Jacob Bekenstein noticed a problem: if a system with entropy, like a container of hot gas, was thrown into the black hole, and the black hole doesn’t have entropy, where does the entropy go? It had to go somewhere; otherwise, the black hole would violate the second law of thermodynamics – that the entropy of an isolated system, like our universe, can’t decrease.

Bekenstein postulated that black holes must also have entropy, and that the amount of entropy is proportional to the black hole’s surface area, i.e. the area of the event horizon. Bekenstein also worked out that there is a limit to the amount of entropy a given volume of space can contain, as well as that all black holes could be described by just three observable attributes: their mass, electric charge and angular momentum. So if a black hole’s entropy increases because it has swallowed some hot gas, this change ought to manifest as a change in one, some or all of these three attributes.

Taken together: when some hot gas is tossed into a black hole, the gas would fall into the event horizon but the information about its entropy might appear to be encoded on the black hole’s surface, from the point of view of an observer located outside and away from the event horizon. Note here that the black hole, a sphere, is a three-dimensional object whereas its surface is a flat, curved sheet and therefore two-dimensional. That is, all the information required to describe a 3D black hole could in fact be encoded on its 2D surface.

Doesn’t this remind you of the AdS/CFT correspondence? For example, consider a five-dimensional anti-de Sitter space inside which there is a black hole. We can use the correspondence to show that the entropy of the theory that describes the boundary of this space matches exactly with the entropy of the black hole itself. This would realise the conjecture of ‘t Hooft and others – except here, the information is encoded not on the event horizon but on the boundary of the five-dimensional space itself.

This is just one example of the wider context that the AdS/CFT correspondence inhabits. For more examples and other insights, do read Maldacena’s interview with The Wire Science.

The author is grateful to Nirmalya Kajuri for discussion and feedback on this article.