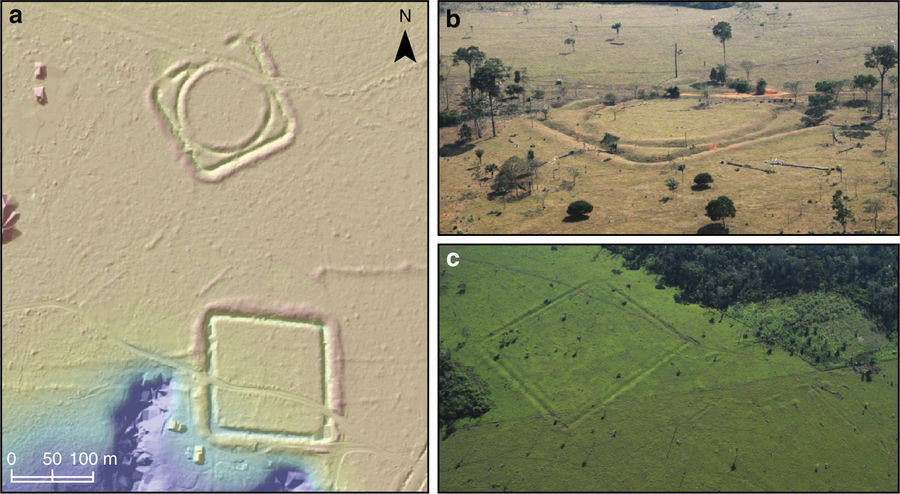 Archaeologists recently discovered that around a million people once lived in villages in regions of the Amazon basin. This evidence is contrary to claims that pre-Columbian people – indigenous people from before the European colonisation of America – occupied only areas close to the Amazon river.

Jonas Gregorio de Souza, postdoctoral fellow at the University of Exeter and lead author of the paper describing these findings, said, “We have found that some populations away from the major rivers are much larger than previously thought.” He added that “there is a common misconception that the Amazon is an untouched landscape, home to scattered, nomadic communities” but their findings imply otherwise.

Using satellite images from Google Earth and Zoom Earth, Gregorio de Souza and his team surveyed over an area of 54,000 sq km and identified sites that showed signs of human inhabitation. Deforestation facilitated the study, as they were able to clearly see what was on the ground in the satellite images only because of the absence of the forest cover.

The team discovered 81 pre-Columbian sites which accounted for 104 earthworks, i.e, structures made with soil that are often built for defence. Most of these earthworks, called geoglyphs, were circular, hexagonal or square-shaped areas enclosed by ditches. They are not sure of the purpose of these geoglyphs, but guessed that they were probably used for rituals and ceremonies.

They saw that these structures were usually located on plateaus overlooking rivers and streams, but never in mountains. The individual enclosures varied in size, between 11 and 350 m in diameter, with the largest at nearly 20 hectares. The number of earthworks found in each of these structures also differed from one site to another. Further, some of them were complex, i.e., one enclosure inside another, and others showed evidence of avenues and roads both inside and leading away from them.

On excavating some of these areas, the archaeologists often discovered domestic features such as pottery and charcoal remains, as well as evidence of burial sites. The remains suggested that this area of the Amazon basin had been inhabited by around a million people between 1250 and 1500 AD, before the Europeans arrived.

Early European colonisers described widespread settlements in these areas of the Amazon basin. Gaspar de Carvajal, who chronicled the explorations of Francisco de Orellana, wrote, “There was one town that stretched for 15 miles without any space from house to house, which was a marvellous thing to behold.” But their reports were later dismissed as fantasies.

This study, which estimates that between 5,00,000 and one million people inhabited this area of Amazon basin from Bolivia to eastern Brazil, provides evidence to support the reports of these early colonisers. The arrival of the colonisers may have spelt doom for the indigenous inhabitants and most of them succumbed to diseases and genocide.

The southern rim of the Amazon basin is currently linguistically very diverse. The researchers expect that the pre-Columbian people also exhibited similar diversity. Additionally, despite differences observed in the style of ceramics across different regions, the similarity in earthwork structures is very suggestive of interactions between these different earth-building communities, Gregorio de Souza told Ars Technica.

An interesting observation that the team made studying sites in the Upper Tapajós Basin was that smaller settlements seem to be crowded around large settlements, a pattern that is observed in indigenous communities currently occupying a nearby Upper Xingu basin.

“Our research shows we need to re-evaluate the history of the Amazon,” José Iriarte, who was a part of this study and from the University of Exeter told Science Daily. “It certainly wasn’t an area populated only near the banks of large rivers and the people who lived there did change the landscape.”

The Wire Science@TheWireScience
3 Following 15.2K Followers
In the last 24 hours, India has reported 3,32,730 new cases of COVID-19 and 2,257 deaths. The govt is likely to ha… https://t.co/LbfM21joH8
7 hours ago
1 4
In an interview with @MitaliLive, @sujakrao, former secretary of health and family welfare, Government of India, sa… https://t.co/YH8bOgpvnd
8 hours ago
1 1
A national association of doctors and scientists have accused the Centre of lending the COVID-19 vaccination drive… https://t.co/YwglUOkqbb
9 hours ago
1
A team from Centre for Youth Culture Law and Environment inspected 1,009 water bodies in Delhi and found that 302 h… https://t.co/n6xUPmc7rU
10 hours ago
3
Above 500 doctors and health workers of the two leading hospitals in Patna-AIIMS and Patna Medical College and Hosp… https://t.co/sxpd7oVb61
11 hours ago
2 2
The following text, in Kannada, was translated by Kollegala Sharma from the English original 'More Fun Than Fun: My… https://t.co/tLdgVOgzwU
23 hours ago
1
Irrespective of the possibilities and the path the virus takes, the virus is currently evolving and new variants wi… https://t.co/9W1quDByiy
24 hours ago
1 1
In a scathing report, The Guardian newspaper has blamed the Modi government of having been lax in its attitude towa… https://t.co/20mOx0Zw7u
1 day ago
2 1
The World Health Organisation (WHO) and global vaccine charities launched the COVAX programme last April to distrib… https://t.co/dbhC6SQLsU
1 day ago
India’s contribution to the global volume of COVID-19 vaccine doses is 193 million, out of 929 million doses (21%).… https://t.co/natjJHJvo1
1 day ago
6 4
From May 1 onwards, state govts and private hospitals will be able to procure vaccines directly from manufacturers… https://t.co/5XbGYyiIEj
1 day ago
The Gambia has eliminated trachoma, one of the leading causes of blindness worldwide, the government has announced,… https://t.co/KG7ZJHmgET
1 day ago
India’s reporting 3.15 lakh new cases in the last 24 hours is the highest for any country in the history of the COV… https://t.co/EplNKgHiM6
1 day ago
1 3
The health ministry on Wednesday released a slew of comparative data, showing that the severity, virulence and demo… https://t.co/1UteCmPmka
1 day ago
1
NASA has logged another extraterrestrial first on its latest mission to Mars: converting carbon dioxide from the Ma… https://t.co/1ZAYU9hK3x
1 day ago
9
Contact us

Thanks to Us, the Amazon Is Now a Net Greenhouse Gas Emitter, Study Finds

Deforestation in Amazon Rainforest Rose By 17% In 2020