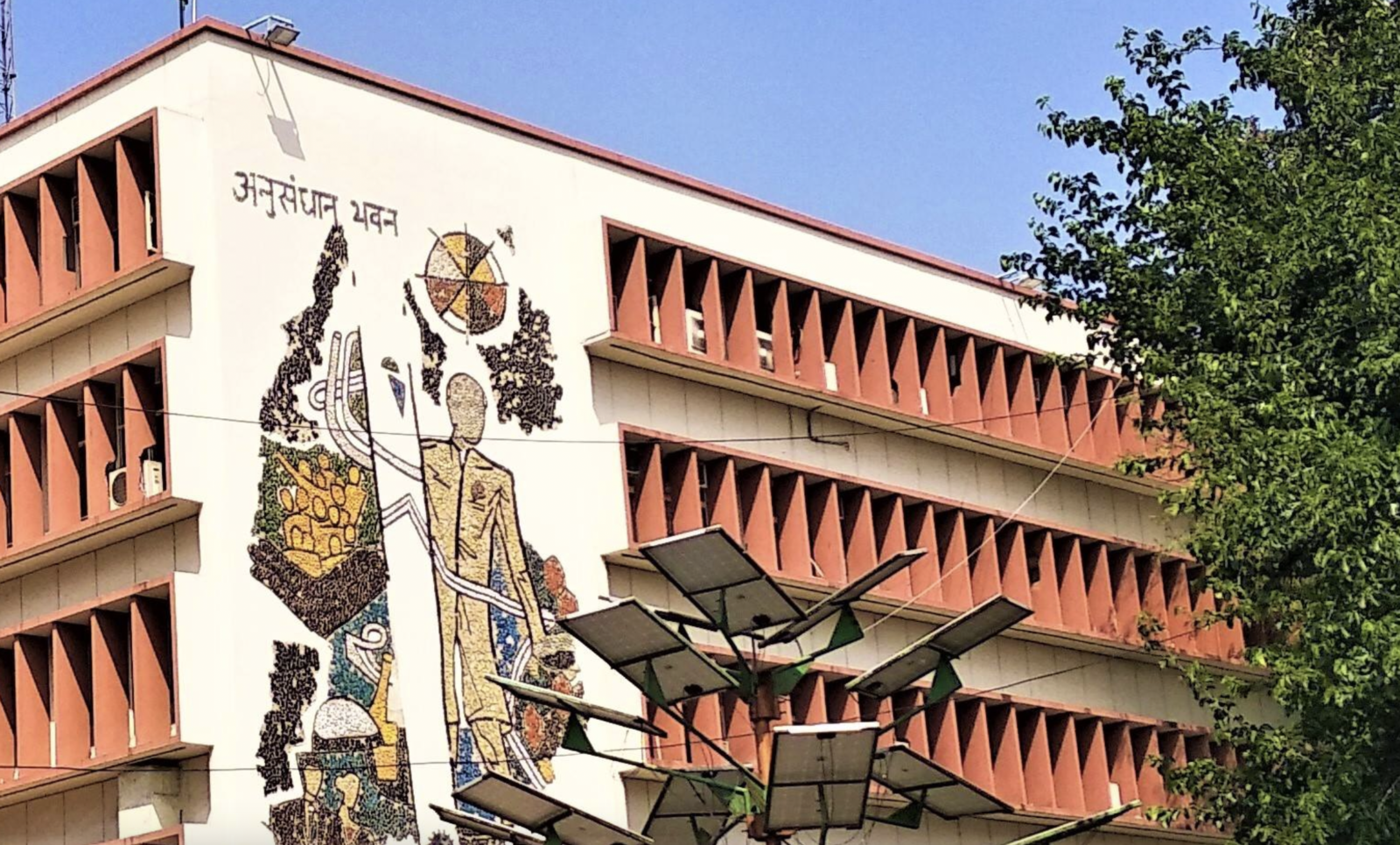 A view of the CSIR headquarters in Delhi. Photo: CSIR/Facebook

On September 27, the Council of Scientific and Industrial Research (CSIR) announced the winners of the Shanti Swarup Bhatnagar Prizes, considered to be India’s top state-sponsored awards for contributions to applied science. But as vice-president Venkaiah Naidu asked CSIR to be agile and “contribute to the larger good of humanity”, it is impossible to see how given the Bhatnagar Prizes continue to recognise and reward mostly men. This year’s winners, in fact, are all men.

We give a damn about awards because, like volcanoes spewing lava, they highlight scientific achievements and their originators by drawing them up from their relative obscurity and throwing them thousands of feet into the air, where everyone can see them.

Awards are also not just awards – that is, they don’t just commemorate important achievements. Awards are susceptible to being elevated or demoted. For example, it is to the Nobel Prizes’ credit (however minimal) when they actively look out for and recognise women’s achievements. When Abdus Salam won the physics Nobel Prize in 1979, it was a triumph for the latter, not the former. Similarly, when the Nobel Committee overlooked Chien-Shiung Wu or Jocelyn Bell Burnell, the committee suffered – not the women.

We are well-past starting to recognise the importance of women’s contributions, and are also aware of the need to identify, and celebrate, the ideas of people of other gender identities, as well as of people of other castes – the vast minority, so to speak. (There is even something of a geographical skew: Binoy Kumar Saikia is the first recipient of the award from Assam in 20 years.) At this time, the Bhatnagar Awards will fall by the wayside if they continue to fail to provide society with a way to recognise its members’ achievements without conforming to a view of science that became dated decades ago.

Second, this year’s winners, as well as the winners of years past, have contributed in important ways to science in India. The fact that CSIR and the prize-giving committee didn’t make the pool of laureates as diverse as they could have does not in any way subtract from the scientists’ work. The male scientists still deserve to win the Bhatnagar Prizes. The problem is that others also deserve to win the prizes, but never seem to do so.

Now, CSIR may respond saying that there are just no women or people of any other gender or caste denominations to pick from. In that case, two simple questions arise.

First, is CSIR – or the country’s science administration more broadly – doing anything to change that as quickly, as efficiently and as sufficiently as it can? Because if we find the answer to be ‘no’, the prizes will have effectively been rigged in favour of (non-trans) men, and in which case they will not really be prizes at all. If the answer is ‘yes’, where the fruits of these programmes, or when we can we expect to see them?

On the flip side, by not doing more to make the awards more inclusive, and more representative of the sort of achievements the scientific enterprise most benefits from, demanding the laureates be diverse for diversity’s sake will increasingly become both the most prominent and most illegitimate argument we can direct at them.

Second, if there are not enough women and others to choose from, what exactly are the prizes commemorating?

For example, the Olympic Games invite the participation of thousands of sportspersons from around the world in different sports that are each carefully administered. When someone wins a medal here, it is a recognition of their grit and determination, and the skills each sport prizes. But if someone wins a medal at a competition in which half the eligible people couldn’t participate because they were unable to travel to the venue or didn’t have the time or money to purchase the requisite equipment, the medal will not say that the winner is the best among all their peers.

Similarly, there is no meaning for the Bhatnagar Prizes to continue to recognise science-related achievements at a time and in a context in which the science is moving along fine – while the science-adjacent things remain broken. So CSIR should consider redefining or expanding science-workers’ eligibility for the prizes, and start recognising work that helps science as well as the scientists who do it.

Next, it should recognise that while the existing crop of laureates are worth lauding, it is unfair, ugly and lazy to keep awarding only, or even mostly, men. To this end, CSIR shouldn’t just bank on nominations by institution and department heads, as it currently does, and also initiate efforts to recognise potential candidates of its own initiative, in a continuous, year-long process while regularly refreshing the prize-giving body, and also allow science-workers to nominate themselves.

Doing so could be worthwhile for two reasons. The Bhatnagar Awards have, and have had, the important opportunity to be more remarkable than they currently are. A swift way to achieve this outcome is to highlight outstanding science work from all parts of the country, by people belonging to all groups – not just a few. The CSIR’s direct involvement in the prize-giving enterprise could also help to overcome the institute heads’ biases, if any.

In addition, by allowing people to nominate themselves, arbiters will be able to consider a larger pool of candidates than one limited to those who have caught the attention of institute directors, ministries’ department heads, vice-chancellors, etc. In fact, asking people to nominate others at the same institute can also disprivilege women and people of other gender identities. This is because, as a consequence, the latter will have had to first penetrate male-dominated networks and working groups.

Second, CSIR keeps the composition of the prize-giving committees – one for each category – confidential. This is likely to protect the committees’ members from being prejudiced by external influences, or vice versa. But this also means there is no way to say if the committees’ members are also full of men, what their deliberations are and how they pick winners. As an alternative, CSIR could constitute committees for each prize for each year, and once it is announced, also reveal the committee’s constituent members. There are enough scientists to staff committees for many years on end without having to repeat them, considering the award categories are so broadly defined.

But if the Bhatnagar Prizes continue to operate as they are, they will only become more irrelevant.

The Wire Science@TheWireScience
4 Following 27.7K Followers
There is now a growing body of evidence that probiotics could also help treat anxiety, depression, multiple scleros… https://t.co/usr3oiZa1j
7 hours ago
1 4
The cerebellum makes up only about 10 percent of the mass of the human brain, but contains more than half of its ne… https://t.co/WPNd03rERi
8 hours ago
1 5
Does Ata’s identity as economically marginalised lend her more easily to institutionalised exhibition and examinati… https://t.co/Wvtei3flxX
2 days ago
3 6
“It (a civilisation) takes place when you are able to have plenty. You have land situated in a place with lots of w… https://t.co/n549nMpNuF
3 days ago
The humanitarianism of death by hanging – insofar as there is any – is encapsulated in the simple but deadly act of… https://t.co/EsCTBlOn5n
3 days ago
“I cling to the coffee, but the yellow rust has killed our crops and there are fewer people working on the land,” s… https://t.co/rGPNJLsIWy
3 days ago
Fossil records show that current extinction levels are around 1,000 times the natural background rate. They are exa… https://t.co/XP2mk9j34Z
3 days ago
3/4ths of the land-based environment & about 66% of the marine environment have been significantly altered by human… https://t.co/vzWs1oqarR
3 days ago
5 12
Scientists have long debated whether the cave bear extinction was a result of cooling climate that reduced vegetati… https://t.co/Md0uBcC1vA
3 days ago
5 6
“One world was ending,” Lisa Wells writes, “but I had no image for what would come next, and the longer I knelt on… https://t.co/2TZQvBq0iy
3 days ago
For long-acting family planning methods, apart from Egypt with over 20% uptake, the other four countries driving po… https://t.co/kq2ZIlSG9p
3 days ago
Among the top five biggest food wasters per capita, for example, at least three – the United States, Australia and… https://t.co/i5EHeBVsXl
3 days ago
In its initial years, the TNWC provided counselling and legal aid to women who were victims of sexual violence, par… https://t.co/kJq4VwTT5i
3 days ago
1 1
According to researchers in Vienna, parts of the world colonised by the same power had more similar flora than thos… https://t.co/eooPaoPZr3
3 days ago
3
Experts suggest the government could use green bonds to control invasive species, although there are some reservati… https://t.co/FbsKZKtrhe
3 days ago
1
Contact us