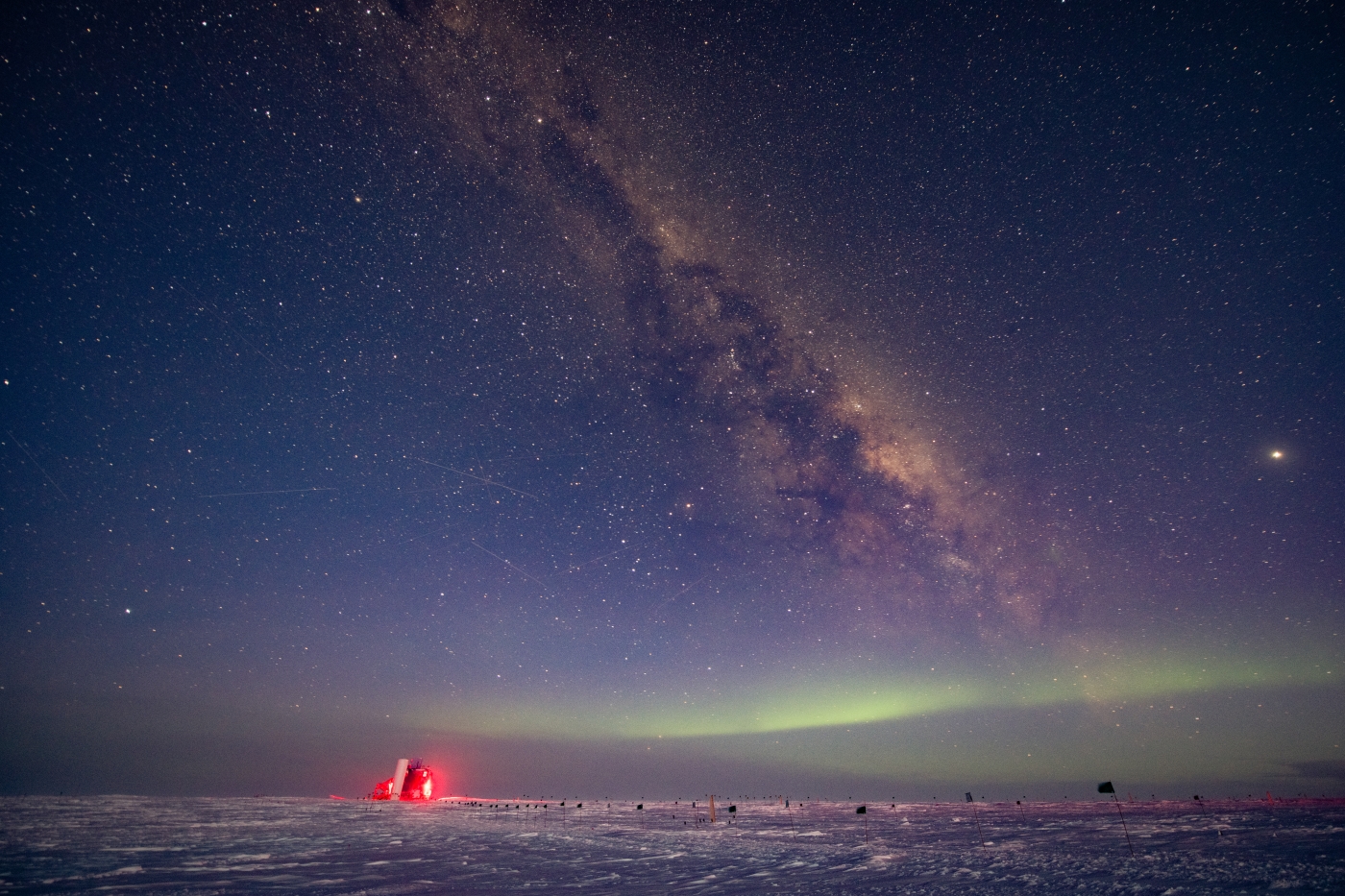 The skies above the IceCube research station… Photo: IceCube collaboration.

New Delhi: Scientists may have found proof of an important particle physics phenomenon first predicted in 1960. The finding, made with the help of a detector buried deep under the Antarctic ice sheet called IceCube, could further cement the validity of a theory called the Standard Model of particle physics.

The American physicist Sheldon Glashow predicted that when a suitably energetic anti-neutrino – the antimatter counterpart of a neutrino1 – smashes into an electron, one of the resulting particles would be the W- boson. This process is called a Glashow resonance.

The finding “marks the confirmation of a 60-year-old prediction and yet another major triumph for the Standard Model of particle physics,” Mohamed Rameez, a physicist at the Tata Institute of Fundamental Research (TIFR), Mumbai, told The Wire Science.

Glashow is one of the people credited with building the Standard Model, which is a theory that classifies all the known elementary particles into specific groups, and describes three of the four fundamental forces of nature: electromagnetic, weak-nuclear and strong-nuclear.

The Standard Model has been wildly successful at predicting the existence of other particles based on known ones and the effects that their interactions will have. However, it has failed to explain dark matter and doesn’t have room for gravity, the fourth force.

This is why physicists believe the Standard Model is missing an important ingredient or is mistaken about some concept, and have been looking for evidence to this end.

However, they have only been finding evidence to the contrary. The observation of Glashow resonance in nature is one such finding.

When Glashow first made his prediction, he underestimated the mass of the W- boson and figured that the antineutrino would have to have an energy of 0.9 tera-electron-volt (TeV). But when the W- boson was discovered in 1983, its higher mass required the antineutrino in a Glashow resonance to have 7,000 times more energy – of 6.3 PeV.

This didn’t just require a change to their theories; physicists also had to drop plans to recreate Glashow resonance in a lab. No human-made particle accelerator on the planet is capable of accelerating any particle to 6.3 PeV. Even the most powerful, the Large Hadron Collider in Europe, can accelerate protons only to 6.5 TeV.

However, one alternative continued to exist, even if it was outside human control. Intense environments in outer space, like in the neighbourhoods of supermassive black holes, are known to accelerate particles to energies well beyond what humans can manage, using twisting magnetic fields of colossal strength and size.

Once accelerated, these particles are sent flying through space. Some of them reach Earth, where special detectors may notice their very high energy and alert physicists to their presence.

On December 8, 2016, at 6:17 am IST, an electron anti-neutrino, which is the type of anti-neutrino required for Glashow resonance2, carrying 6.3 PeV of energy slammed into an electron somewhere in Antarctica’s ice mass, producing a particle that then quickly decayed into lighter particles.

The IceCube neutrino observatory consists of thousands of small detectors called digital optical modules (DOMs) buried 1.4 km to 2.4 km below the Amundsen-Scott South Pole Station in Antarctica. Each DOM has a detection system plus a computer that sends signals to a processing station on the surface.

The DOMs picked up the shower of lighter particles and transmitted the data to the station. By analysing this data, physicists found that their composition was consistent with the production of a W- boson in a Glashow resonance.

Finding that a Glashow resonance event could have happened is one half of the discovery. The other half is to calculate the chances of any other set of events that could have produced a particle shower of the same composition.

According to the research team’s paper, published on March 10, the finding that the electron anti-neutrino came from outside the Milky Way galaxy and smashed into an electron to set off the chain of events has a statistical significance of 5 sigma. This is well above the threshold for evidence in physics – 3 sigma – and just below the 6-sigma threshold to claim a discovery.

On the other hand, the odds of any event other than a Glashow resonance producing the final shower is only 1 in 100, which means their detection has a significance of 2.3 sigma. This is not good enough to count as evidence.

Rameez noted a point of caution here. Usually the sigma value denotes the odds that a hypothesis is true against the odds that it’s not true. But in the present case, the Glashow resonance is the product of “extremely known physics”, in Rameez’s words, so the result should be “viewed as a confirmation rather than as a null test”.

“We did not claim a discovery but rather, for the first time, detected an event that is consistent with a hadronically decayed W- particle at the Glashow resonance energy,” Lu Lu, one of the main analysers of the event and a postdoc at Japan’s Chiba University during the analysis, told The Wire Science.

Glashow was also similarly cautious. “To be absolutely sure, we should see another such event at the very same energy as the one that was seen,” he said in a release. “So far there’s one, and someday there will be more.”

The team members wrote in their paper that the techniques they used to detect the event “have implications for the future direction of neutrino astrophysics”.

For example, one important problem in astrophysics is about the sources of cosmic rays. These are very high energy protons, atomic nuclei and other particles streaming in from outer space and colliding with Earth’s upper atmosphere.

“Previous measurements have not been sensitive to the difference between neutrinos and antineutrinos, so this result is the first direct measurement of an antineutrino component of the astrophysical neutrino flux,” Lu said in a statement.

The team also expects to be able to improve on its result using the IceCube observatory’s upgraded version, IceCube-Gen2, expected to be ready by 2033. According to members involved in this effort, Gen2 will be able to detect 10-times as many ‘events’ of interest as IceCube currently does, every year. The upgrade is expected to take eight years and cost $350 million (Rs 2,552.6 crore).

With a view towards the future of neutrino astrophysics, Rameez said that “there are rich opportunities for the Indian science community to contribute here.”

India is no stranger to neutrino astrophysics. A collaboration between TIFR and the Institute of Mathematical Sciences, Chennai, among other institutes, had pitched for and received approval from the Government of India for the India-based Neutrino Observatory (INO) in 2011.

It was supposed to be built under a mountain in Theni, Tamil Nadu. However, the project got stalled in 2017 after activists complained that the project hadn’t been approved on the right grounds. It is currently awaiting clearances from the National Board for Wildlife and the Tamil Nadu Pollution Control Board.

“As part of INO efforts, a large ecosystem has been incubated at various institutes in India” that could contribute to future IceCube work, Rameez said.