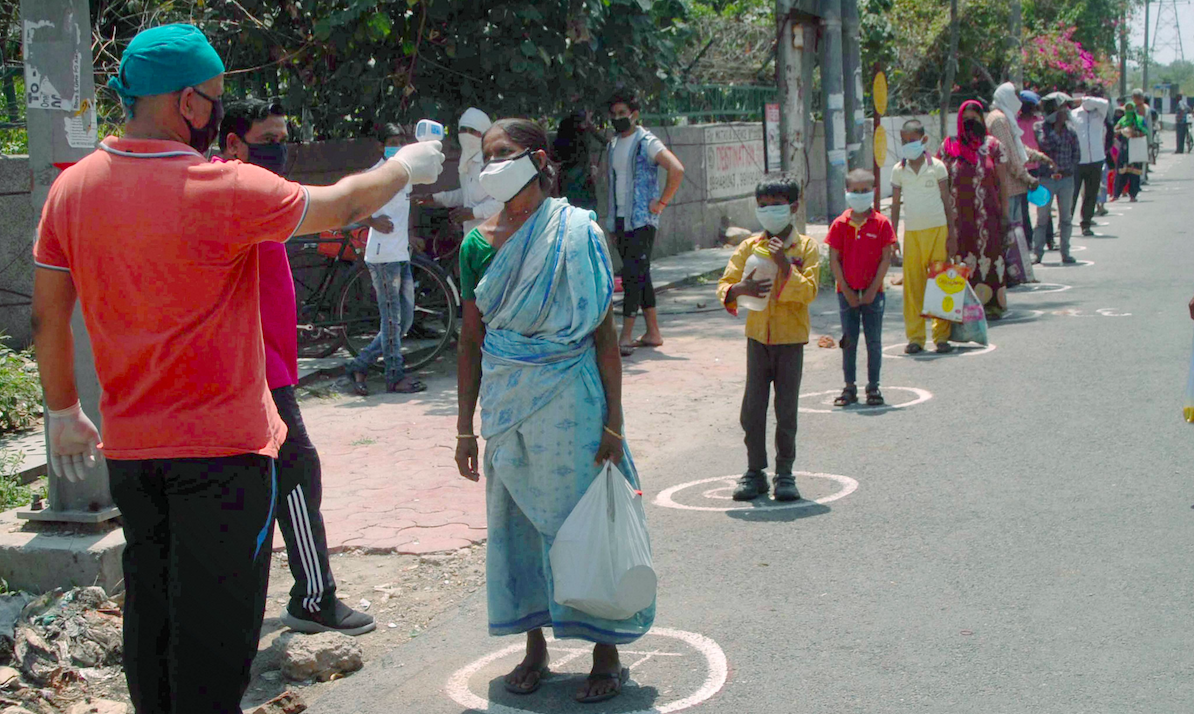 A health worker checks the temperature of a woman, during distribution of food, amid the nationwide lockdown. Photo: PTI.

Understanding how a disease spreads is key to driving policy decisions during an epidemic. And mathematical models that estimate the future course of an outbreak enable better preparedness and inform government response.

Scientists from the Indian Institute of Science (IISc), Bengaluru, and the Tata Institute of Fundamental Research (TIFR), Mumbai, have performed city-scale computer simulations that predict the spread of COVID-19 for Bengaluru and Mumbai once the lockdown lifts. The simulator is available for public use.

A few research groups have already modelled the spread of COVID-19 in India. These models categorise people into different compartments – ‘susceptible’, ‘exposed’, ‘infected’, and ‘recovered’ – and estimate the spread of the disease based on their interactions.

However, regional differences in social behaviour and demographics warrant local models. The number of reported cases is also disproportionately localised to urban centres.

In this context, a city-scale model like the one by IISc-TIFR may be comprehensive for the Indian demographic. “It is a thoughtful and high-quality study that implements a detailed agent-based model approach to an Indian city for the first time,” Gautam I. Menon, a professor of physics and biology at Ashoka University, Sonipat, told The Wire Science.

The simulator builds a small replica of the city with agents – individuals or groups – distributed across municipal wards. It considers the demographics and interaction spaces in the city. Such spaces include households, workplaces, schools, colleges, transport spaces, community spaces and high-density localities. The model also accounts for the differences in population densities, household size, ages of people in the houses, and the number of employed people in the city.

The researchers then ‘seeded’ infections in this model city. The disease spread randomly based on how people meet in these spaces. The team also considered the restrictions in Bengaluru and Mumbai before the national lockdown to account for their effects on the disease’s transmission.

The team simulated different interventions and compared their impact on infection and death rates. For example, their report suggests that if there had been a lockdown for an indefinite period, the number of deaths due to COVID-19 in Mumbai would reduce by 98% compared to a scenario where there is no intervention. A similar comparison for Bengaluru shows a 99.9% decrease in death rate.

1. Home quarantine, physical distancing of the elderly, and closure of schools and colleges until May 4, 2020

2. Home quarantine, physical distancing of the elderly, closure of schools and colleges, and odd-even strategy at the workplace until May 4, 2020

3. Home quarantine and physical distancing of the elderly until May 4, 2020, and closure of schools and colleges for another 28 days

In all three cases, the researchers assumed that 90% of the people in each household would comply with the lockdown and 50% with home quarantine.

In the past, scientists have used agent-based models to predict outbreaks and drive policy decisions. In 2005, a group of researchers led by Neil Ferguson built an agent-based model to understand the future course of a possible avian flu outbreak in Southeast Asia. The next year, the same group used the model to study containment measures in the UK and the US in case of an influenza pandemic. In March 2020, a team led by Ferguson ran simulations using the same agent-based model to inform the UK government’s response to COVID-19 pandemic. The study’s results prompted Boris Johnson to announce restrictions on the movements on people.

“An agent-based model gives us an ability to study targeted interventions like closing schools and colleges alone, home quarantining, social distancing of the elderly, implementing odd-even strategies at workplaces, etc.” Rajesh Sundaresan, a professor of electrical and electronic engineering at IISc, said. Modelling these interaction spaces in detail can help assess the impact of restrictions imposed explicitly on some spaces.

The researchers didn’t ‘activate’ public transport in their simulation, however, as such restrictions had already been in place in both cities. But the simulator is designed to be able to account for this factor as well.

“This is something that might distinguish even Mumbai from Bengaluru. Public transport plays a huge role in Mumbai – it is the lifeline of the city – but comparatively less so in Bengaluru,” Menon said. “How important these differences might be and what differences they might make to the larger picture is interesting to me and these models can be used to study them.”

The group suggests that a second wave of infection can set in if cases in the ‘first wave’ are not aggressively tracked and isolated, thus precluding a second wave. To what extent the number of cases can increase after the lockdown depends on how many sick people are present in the city when restrictions are lifted. But with some restrictions in place after the lockdown, the increase in the number of deaths due to COVID-19 can be postponed.

However, the model does not account for any sudden changes in social behaviour.

For now, the team has modelled the spread of the disease in Mumbai and Bengaluru, but it can be extended to other cities. Town-scale and city-scale models with interactions that account for travel and migration can help produce reliable national estimates. Such models can better gauge resources required to fight the epidemic at a state or national level and inform the government’s response.

Joel P. Joseph is a PhD student at the Indian Institute of Science, Bengaluru, and an aspiring science writer.