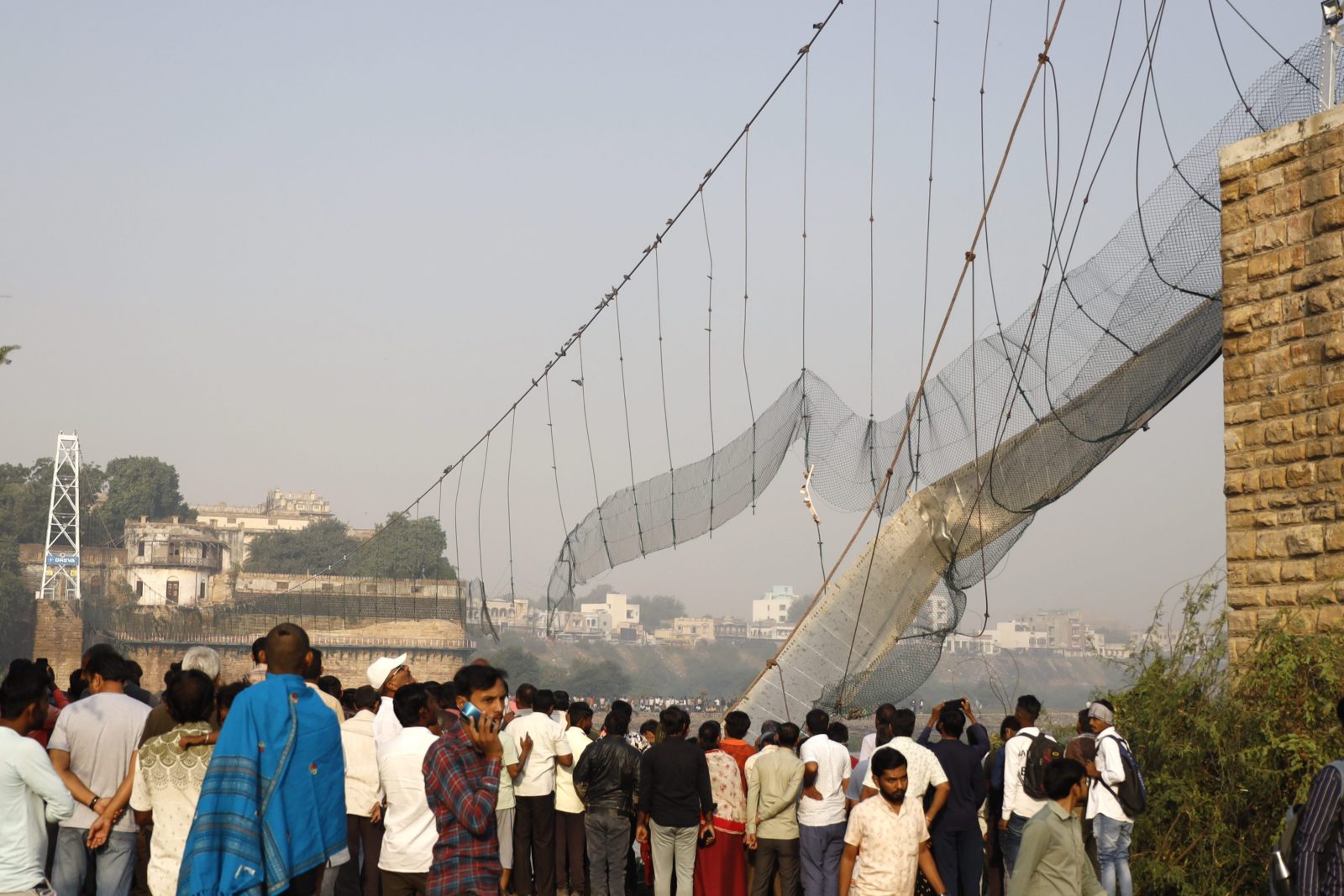 In Tamil Nadu, a Glimpse of What ‘Control’ Means in ‘Pollution Control Board’

People gather at the site of a rescue operation after the suspension bridge over the Machchhu river collapsed in, October 31, 2022. Photo: PTI

Bengaluru: A PTI report on the Morbi suspension bridge collapse quoted an individual who was on the bridge earlier yesterday, who said “some youths” started shaking the bridge to frighten other visitors. The individual then said he got off the bridge and warned the management staff, who reportedly did nothing.

PTI wrote that a “few hours later”, the individual’s “fears proved right when that bridge on the Machchhu river, a tourist attraction, collapsed around 6.30 pm.” The phrase “fears proved right” suggests that the youth’s actions were responsible for the bridge’s fall. Could this be true?

The bridge in question had been reopened five days ago after repairs and maintenance by a “private trust” named Oreva Group, and which reports said may not have received a “fitness certificate” from the local government before opening for passenger traffic.

The precise manner of the bridge’s collapse is not yet clear; knowing this could reveal what exactly caused the fall. It could have been due to straightforward structural damage, like material fracture or a failure of a joint, that led to a cascading sequence of failures. Suspension bridges are also susceptible to other forms of failure not common to other bridge designs, like resonance and aeroelastic flutter.

The November 7, 1940, collapse of the Tacoma Narrows Bridge in Washington, US, provides a snapshot of many of these forces at work.

The disaster happened in three ‘phases’. First, a strong and constant wind passed over the bridge. The wind deflected the bridge by a very small amount and then the bridge returned to its original shape. At first this induced a negligible motion, but over time, the forces between the wind and the bridge became larger through a positive feedback loop and the bridge began to twist back and forth. This phenomenon is called an aeroelastic flutter.

The animation below visualises the formation of this flutter: the rectangular block is the bridge seen head on, with the red and blue streams representing the movement of wind above and below the bridge. Notice how a small imbalance in forces at the beginning soon leads to jerking motion.

In the second phase, a steel suspension cable broke off due to the flutter, allowing the bridge to rock more freely. In some time, the bridge was rocking in an efficient way that didn’t allow the stresses and strain building up in the structure to dissipate. You might have noticed this when rocking back and forth on a swing: if you push yourself forward but at the wrong time, you incur a momentum penalty and slow down. The bridge, on the other hand, was rocking itself in a self-reinforcing fashion, inducing motion in its body that lost energy only through that motion.

In the third phase, the cost-cutting measures used in making the bridge brought themselves to bear. Suspension bridges are usually designed such that the whole structure can dissipate excess stress through the cables, which are linked to anchors below the ground. This is also what allows these bridges to withstand earthquakes better than those of other designs. However, when these cables and the deck aren’t manufactured and/or installed to the highest standards, the bridge will accumulate stress and eventually fail, possibly in catastrophic fashion.

The same thing happened to the Tacoma Narrows Bridge, which ripped itself apart. Fortunately it didn’t result in any deaths: as the bridge started to shake more vigorously, the people on it got off.

Could the Morbi suspension bridge also have failed due to aeroelastic flutter? We don’t know. There are no reports yet on whether the bridge was experiencing any of the relevant symptoms. At this time, only further investigation – whether of a structural failure brought on by incomplete renovation, deliberate physical damage or some other cause – can reveal the true cause of the tragedy.

Note: At 1:47 pm on October 31, 2022, this article was edited to remove mention of a video showing a group of people jostling on the bridge; the video had been shared by NDTV but has since been deleted.