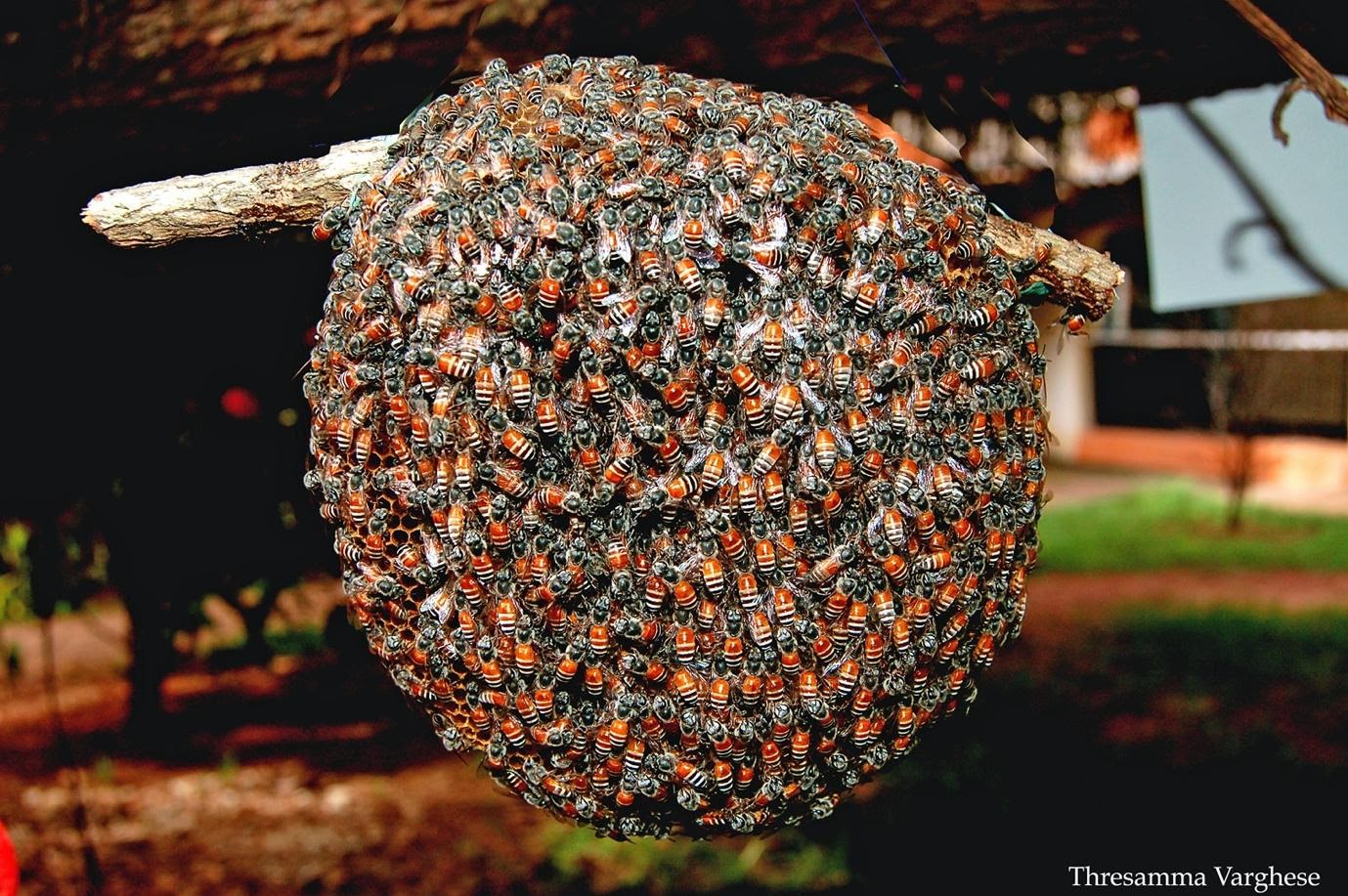 A nest of the Asian dwarf honey bee (Apis florea) on the IISc Bangalore campus. This is an unusual species that dances on a horizontal rather than a vertical dance floor. Photo: Thresiamma Varghese.

This article is the introductory edition of a new column by Prof Raghavendra Gadagkar, in which he sets the theme. In this column, Prof Gadagkar will explore interesting research papers or books and, while placing them in context, make them accessible to a wide readership.

Sir Noël Peirce Coward, an English playwright, composer, director, actor and singer, said, “Work is more fun than fun”. I think the same is true, or should be true, of science as well. But that is not the common perception of the public, nor of many scientists, I am sorry to say. Now, why should this be so? One reason I think is that we define science and scientists too narrowly, and the scientific method even more narrowly. And we take a very limited view of who can, and should, do science, when and for what purpose. If only we took a more expansive view of science and scientists, I think science will indeed be more fun than fun. To do that, scientists need to explore far and wide. We need to take inspiration from the vast stores of knowledge and wisdom from outside the narrow confines of science.

This is not so easy, but I try. I am, for example, an avid listener of the New York Times Book Review Podcast. Not long ago Stephen Fry came on it and blew my mind away. He made me go and rewatch his [Oscar] Wilde and listen to several of his inimitable narrations of audiobooks. Two things struck me especially. First, he praised Stephen King’s On Writing (2000) and his advice on spare writing, to strip away all adverbs… but then he said, “I have tried to do that with my writing, but no, it’s no good… this is the writer [I am] and if people think it’s overwritten… over florid, then so be it, they will have to put the book down and turn to someone [else]”.

No wonder he begins the second volume of his autobiography saying: “All the true artists I know are uninterested in the opinion of the world and wholly unconcerned with self-explanation. Self-revelation, yes, and often, but never self-explanation. Artists are strong, bloody-minded, difficult and dangerous.”

One day I was switching channels on my television and I came across Raj Kapoor being interviewed by Simi Garewal. She asked Raj Kapoor to name his most favourite among his many films. He hesitated, said it was very difficult, but finally named the film Mera Naam Joker (1970). “But that film was a total box office flop,” she protested. Raj Kapoor said with a smile that all his films were wonderful, they were like his children and he loved them all but if he was forced to pick a favourite, he would pick the one that did not do so well in the world.

I recently watched the brilliant Argentinian film The Distinguished Citizen (2016) in which the protagonist says in his speech, when accepting the Nobel Prize in literature:

“I am convinced that this type of unanimous recognition is indirectly and unmistakably related to the decline of an artist. This prize proves … that my work agrees with the tastes and needs of judges, specialists, academics and kings. Obviously, I am the most comfortable artist for you. And that comfort … has very little to do with the spirit that every artistic work should have. Artists are supposed to question, to shock. That’s why I feel regret about my final canonisation as an artist. However, the most persistent feeling, mere pride, hypocritically drives me to thank you for deciding the end of my creative adventure.”

It is this paradoxical combination of self-confidence and modesty, which really amounts to ‘zero hypocrisy’, that we scientists need to cultivate.

The second reason why Stephen Fry impressed me was because he spoke about his retelling of the Greek myths. I was immediately led to his first volume on the subject, Mythos (2017). I study the social life of ants, bees and wasps and any mention of these words, especially outside the realm of science, makes me sit up. In Mythos, Stephen Fry tells the marvellous story of how the honey bee became social and how she got her sting. On the occasion of his wedding with Hera, “Zeus issued a challenge: whoever could devise the best and most original wedding dish could ask any favour of him… The winner was the seemingly modest submission of a shy little creature named Melissa [whose] name for it was honey”. And the reward? “Zeus said, ‘from this moment forward the gathering of your honey will be made easier by my decree that you shall not labour alone. You will be queen of a whole colony, a whole swarm of productive subjects. Furthermore, I shall grant you a fatal and painful sting.’ … ‘But,’ Zeus continued, ‘while it will bring a sharp pain to the one you sting, it is to you and your kind that it will bring death.”

Fry continues: “Meliss is still the Greek word for the honeybee, … science calls the order of insects to which the honeybee belongs Hymenoptera, which is Greek for ‘wedding wings’.” I find it remarkable how many names for animals and plants, and heavenly bodies are derived from Greek mythology.

Modern science has learned much about the honey bee. We know a great deal about how bees make honey, gathering nectar from countless flowers, with scouts recruiting naïve bees using a dance language. We have uncovered many secrets about how bees navigate to find their food and return home. We have understood how they use decentralised self-organisation to perform tasks well beyond the reach of any individual bee, or human. We have also gained considerable knowledge about the composition and medicinal properties of honey. We know that the bee’s sting is armed with barbs pointing backwards, making it impossible to withdraw, once deployed. Every act of stinging is indeed an act of suicide. We have created a whole industry in trying to understand how evolution by natural selection could possibly have shaped such seemingly maladaptive behaviour.

But why should we pay attention to Greek myths, or any myths? I believe that we should marvel as much at what the Greeks and other ancients knew and guessed about honey bees, or anything else, and what they got dead wrong, as we do at our own discoveries; the honey bee queen was a king in their imagination, for example. Only then would we create a complete science of knowledge production and it would really be much more fun. But we must also be warned that it is easy to go astray.

As literal interpretations of myths and crassly invoking them to exaggerate the glory of our past have become the order of the day, let us see what Stephen Fry had to say about Greek myths:

“Much as a pearl is formed around grit, so a legend is taken to have been built up around a grain of truth… Myths … are imaginative, symbolic constructs… No one believes that Hephaestus ever truly existed. He stands as a representation of the arts of metalwork, manufacture and craftsmanship… Symbolical rather than historical in origin as myths and mythical figures might be, … Most of those who told and retold the myths would have been aware, I think, at some level of their consciousness, that they were telling fictional tales.”

But why did they tell them? What function did the tales serve, and how is that different for the tales we tell today? How do tales become associated with truth or falsehood? All is fair game for a grand view of science, for Wissenschaft as the Germans like to say.

The Wire Science@TheWireScience
3 Following 14.8K Followers
Haryana health minister Anil Vij on Monday said that he did not need another dose of vaccination against coronaviru… https://t.co/Cy0Ya7txOn
6 hours ago
Earlier this month, Democratic lawmakers reintroduced the Scientific Integrity Act, which would help guard federal… https://t.co/uTDdPYPt2b
7 hours ago
2 6
In the popular imagination, coexistence remains for the large part an ideal to work towards, a utopia of tomorrow.… https://t.co/Lcj74Cl9Xq
8 hours ago
1 1
Day temperatures are likely to be above normal in the northern, northeastern, parts of eastern and western India, t… https://t.co/OIh1WTVrIS
9 hours ago
1 3
Of all the appeals that the National Green Tribunal (NGT) dismissed last year, half were on the technical ground th… https://t.co/uAcEBe5CYc
10 hours ago
1
Not all people in STEM are equal, and therefore, not all of their mental healths are affected in a similar fashion.… https://t.co/M647TnAQFP
11 hours ago
Nearly two thirds of Russians are not willing to receive Russia’s Sputnik V vaccine, and about the same number beli… https://t.co/FZrFDrkUwR
12 hours ago
1 1
Britain on Monday appealed for a mystery individual infected with a highly transmissible variant of the novel coron… https://t.co/ErL6ThZB1Q
13 hours ago
1
Data show that antibiotics are being rampantly overused during the pandemic. https://t.co/65mhpv05sa
14 hours ago
1
Ramping up production is especially challenging for Pfizer and Moderna, whose vaccines use an mRNA technology that’… https://t.co/aq4qAFum2H
15 hours ago
2
Since the launch of the scheme in 2016, the government has been able to release only 33.4% of the allocated MDA.… https://t.co/7HI35q1Jin
16 hours ago
1 3
People often question why the administration can’t use the mighty Defense Production Act — which empowers the gover… https://t.co/sbGRUCXMZG
1 day ago
In an interview to Karan Thapar, Dr. Srinath Reddy said it would make sense for the government to tackle the distri… https://t.co/utrEeLd081
1 day ago
Recently, the WHO suggested national bans on the most hazardous pesticides. Globally, an estimated 110,000 to 168,… https://t.co/wpZiNNGUsy
1 day ago
2
Cases of avian influenza (bird flu) have been reported from several states of India. There is panic among the publi… https://t.co/WDfAWjdydd
1 day ago
Contact us