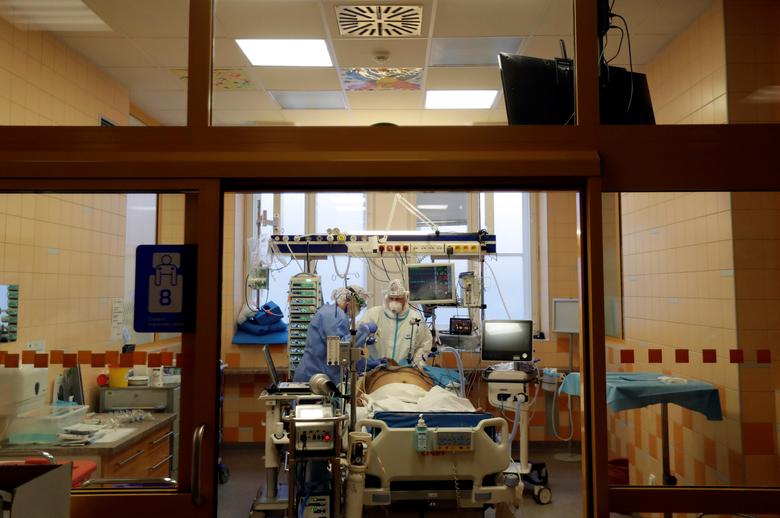 A patient suffering from COVID-19 is treated at the ICU of a hospital in Prague, Czech Republic, September 22, 2020. Photo: REUTERS/David W Cerny

New Delhi: Doctors looking into the neurologic effects of COVID-19 have found that nearly a third of hospitalised patients experienced encephalopathy and that it increased the risk of morality.

The findings of the study were published in the journal Annals of Clinical and Translational Neurology on Monday. The study, which monitored 509 patients in 10 hospitals in Chicago between March 5 and April 6, found that 82% of patients had neurologic symptoms at some point in the course of the disease. Nearly 45% of patients with neurologic symptoms experienced muscle pain, while 38% had headaches and nearly 30% experienced dizziness. A smaller percentage of patients also reported disorders of taste or smell.

While younger patients reported these neurologic symptoms, altered mental state – the medical term for encephalopathy – was found to be more common among older patients. Encephalopathy is a generic term for problems, including and not limited to, attention and concentration, loss of short-term memory, disorientation, stupor and “profound unresponsiveness” or a coma-like level of consciousness. Patients in the study with encephalopathy reported issues such as confusion, delirium and unresponsiveness.

The researchers were surprised that neurologic manifestations as a whole were more likely to occur in younger people, but suggest that with older patients, doctors could have placed greater clinical emphasis on the risk of respiratory failure than other symptoms in older patients.

Not only did patients with altered mental states have significantly worse medical outcomes, but also stayed three times longer in hospital than those without any neurologic symptoms. “Encephalopathy was associated with increased morbidity and mortality, independent of respiratory disease severity,” the study says.

The doctors suggest screening patients for encephalopathy could help identify the severity of COVID-19 and may have utility in resource allocation and “potential to improve patient outcomes”.

The doctors could not determine the cause of encephalopathy with certainty “given the lack of extensive diagnostic neurologic testing for most patients”. They speculate that the causation of encephalopathy is “most likely” multifactorial, including “systemic disease and inﬂammation, coagulopathy, direct neuroinvasion by the virus, endotheliitis [immune response within the endothelium in blood vessels, in which they become inflamed] and possibly post-infectious auto-immune mechanisms.”

According to the New York Times, there is little evidence as of now to suggest that the novel coronavirus directly attacks brain cells. The neurologic symptoms are probably explained by “inflammatory and immune system responses” that can affect the brain and other organs.

Dr Serena Spudich, chief of neurological infections and global neurology at Yale School of Medicine, told NYT that the findings of the paper suggest that patients with altered mental function “might benefit from closer post-discharge monitoring or rehabilitation.”

Of the 162 patients with encephalopathy, a majority were older (the mean age was 65) and male. They also had a history of any neurological disorder, cancer, cerebrovascular disease, chronic kidney disease, diabetes, heart failure, hypertension and smoking.

“This is an important study, since the neurological complications of the infection seem to be frequent and in many cases long lasting, but yet have not received much attention,” Dr Avindra Nath, chief of the section on infections of the nervous system at the National Institute of Neurological Disorders and Stroke, told the Times.

The findings of the study could help better understand COVID-19 ‘long-haulers’ – people who have recovered from the disease, but continue to battle symptoms. Reports have said that even younger patients of COVID-19, who are in their 20s, experience “excruciating headaches, brain fog, neuropathy, high blood pressure and loss of taste and smell” after recovering from the viral infection.

The timing of the study has also prompted speculations about the effect that COVID-19 could have on US President Donald Trump, 74, who tested positive on October 2. The study’s lead author Koralnik declined to discuss Trump’s health, saying doctors should generally be on the lookout for signs of neurologic distress.

“Even people who have mild respiratory problems that don’t last long are still at risk of long-haul symptoms,” he told Bloomberg.

Also Read: How COVID-19 Might Increase the Risk of Memory Loss and Cognitive Decline

Higher incidence of neurologic symptoms in the US

In studies conducted in China and Europe, just 36.4% and 57.4% of hospitalised COVID-19 patients experienced neurologic symptoms. The authors of the Chicago study speculate that the differences in frequencies may be caused by genetic factors and possibly strain variations of the virus. “In addition, our hospital network system was never stressed beyond capacity due to surge preparation and most patients had moderate disease, with only one quarter developing severe respiratory distress requiring mechanical ventilation. This may have allowed for more detailed evaluation and identiﬁcation of neurologic manifestations,” they say.

Acknowledging the limitations of their study, the doctors said fewer than 6% of patients were evaluated by neurologists or neurosurgeons. “Since most patients were admitted to dedicated COVID-19 wards or ICUs with strict infection control precautions in place, access to brain CT or MRI was not as readily available as for other patients with neurologic diseases,” the study says.

The long-term effects of COVID-19 on the nervous system remain uncertain, they add. “Our results suggest that, of all neurologic manifestations, encephalopathy is associated with a worse functional outcome in hospitalised patients with COVID-19, and may have lasting effects,” they say, adding that long-term follow-up is necessary to assess the “true burden of encephalopathy”.