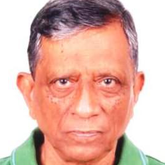 In M.S. Narasimhan’s passing, India has lost one of its most versatile mathematicians.

As one for whom he was a mentor, colleague, long time collaborator and a close friend, I feel particularly deprived.

Narasimhan, or MSN as his friends called him, was from a family in a small village called Thandarai, in Tiruvannamalai district, Tamil Nadu. His family had a healthy income from agriculture and did well, although MSN’s father passed away before he turned 12.

Thandarai didn’t have a high school, and MSN used to reminisce about going to school in a nearby town on a bullock cart. He did well at his studies and was able to get into the prestigious Loyola College in Madras (today Chennai), where he was fortunate enough to be taught by some fine lecturers.

One of them was Father Racine, a Jesuit who had come to India as a missionary from France, after receiving a doctorate under the guidance of Elie Cartan, one of the great mathematicians of the 20th century. Although Racine was not involved in research any longer, he was au courant with contemporary mathematics. This was extremely rare in India at that time.

One of MSN’s classmates there was another eminent researcher, C.S. Seshadri, who passed away late last year. Seshadri founded the School of Mathematics in the late 1980s that later became the Chennai Mathematics Institute.

Father Racine had a knack for identifying good students and he encouraged the brighter ones to go on to the then-fledgling Tata Institute of Fundamental Research (TIFR), Bombay, which had been established with Homi J. Bhabha as its director. MSN and Seshadri both joined TIFR in 1953.

One of the sections in TIFR was the ‘School of Mathematics’, which aspired to be in the same league as its counterpart in the Institute of Advanced Study, Princeton. The head of this school at the time was K. Chandrasekharan, known as KC, who had returned to India after a stint at the Princeton institute.

KC was alive to the fact that very few persons in India had even a rudimentary knowledge of modern mathematics. He had the understanding, necessary contacts and administrative ability to deal with this. He invited top mathematicians from various centres across the world and had each of them teach a course on one area of mathematics, made the students write up the lectures, and helped publish the notes.

One of the invitees was Laurent Schwartz, the Frenchman who had won the Fields medal in 1950. MSN was Schwartz’s notes writer, and Schwartz was soon impressed by the ability of MSN and other students. He induced many French mathematicians, young and old, to visit TIFR and also arranged for TIFR’s students to visit French universities on scholarships.

Accordingly, MSN and Seshadri were deputed to France. During his stay there, MSN studied under Schwartz and other accomplished mathematicians. Together with a Japanese mathematician named Takeshi Kotake, he wrote a significant paper on differential equations.

Unfortunately, he was down with pleurisy1 during his stay and had to be hospitalised. He was never bitter about this circumstance; in fact he actually felt that this enabled him to socialise with many strata of French society outside academia and also that it made him comfortable with spoken dialects of French.

Also read: C.S. Seshadri: From Proofs to Transcendence via Theorems and Ragas

I was a graduate student when he returned, and his acquaintance was to me, then a struggling student, a great boon as I was trying to find a problem to work on for my PhD. Together with a younger colleague, M.S. Raghunathan, who was to reach great heights later, we ran a seminar that was well received.

One day, when I was playing tennis, MSN was waiting in the wings and asked me when I was through: “You have learnt a lot of good mathematics but do you have any mathematical problems to work on?” I had learnt differential geometry from one of the visiting mathematicians from France, J.L. Koszul, and said I knew of one (in the classifying space for vector bundles, there was a homogeneous connection and wondered if that could be universal for connections as well).

MSN was excited by the problem and we worked day and night for about ten days, and ultimately proved that my guess was correct. It proved to be central for many developments later, in both differential geometric and gauge-theoretic areas.

Seshadri had also returned by that time, and MSN and he worked together on a question that arose from the concept of ‘stable bundles’, which had just been introduced by David Mumford. This resulted in seminal work that put together two different concepts – one from topology and the other algebraic-geometric. This is quoted even today, after 60 years; there was also a conference some time ago headlined ‘Fifty years of the Narasimhan-Seshadri theorem’!

Narasimhan’s influence on the TIFR school was immense. It has been a privilege and a pleasure to have worked together with him for over 20 years. To some of our students, we were ‘joint mentors’. He trained many students who, in time, distinguished themselves as fine mathematicians themselves.

“One should learn to work from the top,” MSN used to say. What he meant was that one ought not to be bogged down in details while doing research. One should try and think out of the box, solve the problem and then work out the details. This attitude helped him fearlessly address problems in various fields, including gauge theory in physics, differential equations, differential geometry, algebraic geometry and representations of real Lie groups, to mention just a few areas. This also enabled him to collaborate with mathematicians of differing vintages.

On the administrative side, MSN became the first chairman of the National Board for Higher Mathematics, and it was my pleasure to work as the secretary at that time. He was very particular that bright Indian students should be retained in India. Even if they emigrated abroad, one should make efforts to get them back, he would say. Only then could students in India be trained well and will the country’s general scientific level rise.

His concern also extended to students from other developing and underdeveloped countries. After nearly 40 years at TIFR, he decided to accept an offer to head the mathematics section of the International Centre for Theoretical Physics in Trieste, set up by the Pakistani Nobel laureate Abdus Salam in 1964. On his return, MSN settled in Bengaluru.

Although he had retired, he was still well into mathematical research, and even a few months before the end, he helped solve a problem that a student of a common friend of ours, Oscar Garcia-Prada, was grappling with.

In addition to mathematics, MSN was interested in books, particularly in Tamil. His wife Sakuntala, an accomplished singer in both the Carnatic and the Hindustani traditions, once recalled that on his honeymoon trip, he had packed some books in Tamil and also on mathematics! MSN was also an admirer of art, making full use of his sojourns in France. His daughter, Shobana, is a solid-state physicist who, to MSN’s delight, was recently elected to the American Academy of Arts and Sciences. His son Mohan was in the US for several years, and came down to India and helped MSN during his last years.

It has been my good fortune to have had the close companionship of MSN for as long a time as I did. Rest in peace, my friend.

S. Ramanan is a mathematician and adjunct professor at the Chennai Mathematical Institute.