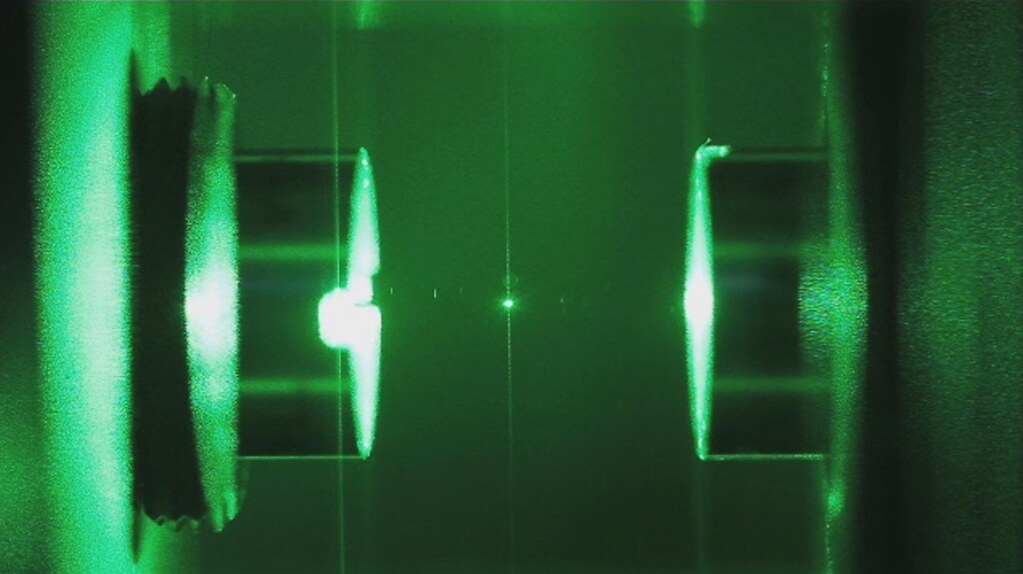 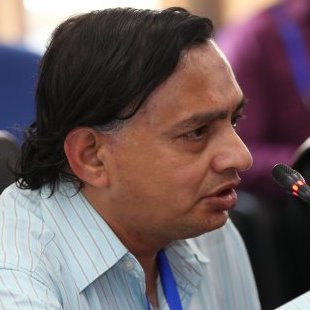 Why Preparations for the Next Pandemic Must Begin Now

A glass nanoparticle suspended in an optical cavity. Photo: uclmaps/Flickr, CC BY 2.0.

Nanotechnology may not be a familiar term to many although nanotechnology-based products are available in the market and many consumers use them. Thanks to ‘Nano Mission’, an initiative funded by the Government of India through the Department of Science and Technology from May 2007, India has made great strides in nanosciences and engineering.

In this regard, Nanoscale, a new book by Pankaj Sekhsaria, a policy researcher at the Centre for Technology Alternatives for Rural Areas, IIT Bombay, doesn’t eulogise the technology and its achievements nor does it criticise them and their deployment and risks.

Instead, Sekhsaria takes an atypical tack to set out what is possible, offering us new ways to conceive of and evaluate research. Through four case studies, he attempts to understand the links between science, technology and society at different sites and at different scales as if to ensure we are aware of what all is possible before we embark on our respective critical journeys. They are:

1. Developing a cutting-edge microscope at a university in Pune, despite severe constraints

2. Using nanotechnology to validate some components of a traditional Ayurvedic preparation

3. The failure of an innovative product – a nano-silver-coated ceramic candle used to purify water in households

4. Nanotechnology-based treatment protocols for retinoblastoma, a cancer that affects children

The first case study concerns the construction of a scanning tunnelling microscope by C.V. Dharmadhikari at the University of Pune, using a variety of materials, including nanoparticles. Sekhsaria describes how Dharmadhikari built this sophisticated device from scratch, indigenously, and which he and his team now use for their research.

With this in mind, Sekhsaria invokes the concept of jugaad and the culture of innovation in laboratories around India. However, Eric von Hippel’s user innovation theory offers a better explanation: that more innovation is driven by intermediate or end users, at the site of consumption, which is then integrated by suppliers. In this case, Dharmadhikari is both a user and an innovator: he first developed the instrument and then, in the course of using it, continued to make minor modifications to better suit his and his peers’ purposes.

In fact, this would be true of most scientific instruments – which are constantly attended to by a community of user-innovators of PhD students, postdoctoral researchers and investigators. As a result, in an ecosystem where resources are scarce and grants and funds are constantly shadowed by uncertainty, such DIY endeavours contribute more innovation and help adapt sophisticated technologies for more local conditions – including nanotechnology.

Sekhsaria subsequently describes the fate of Dharmadhikari et al’s scanning tunnelling microscope, and compares it to that of similar innovations elsewhere in India. However, he stops short of discussing the range, utility and novelty of such  instruments and how they have enabled Indian scientists to pursue science despite their constraints. Nor is there mention of how common such solutions are common across disciplines and institutions. Of course, user innovation can occur even when new instruments are acquired – but if building instruments from scratch is very widely practised, it deserves a fuller study, as an important dimension of doing science in India.

The second case study concerns the use of nanotechnological tools to validate the components of a traditional Ayurvedic preparation, called bhasmas, and related work at the Centre for Nanobioscience, Agharkar Research Institute, Pune. Using the studies of Rinku D. Umrani, Sekhsaria highlights how the dialog between modern science (nanotechnology) and traditional medicine (Ayurveda) is necessary, although there are skeptics on both sides.

While the usefulness of traditional medicine is well known and accepted, it is often debunked as unscientific or considered to be scientifically unprovable. But a dialog could help better understand each system from the other system’s perspective, paving the way for potentially fruitful collaborations.

With the specific example of bhasmas, Sekhsaria focuses the discussion onto the challenge of checking if Ayurveda can provide an alternative way to manage diabetes. Umrani’s work suggests that the mechanisms of action of some Ayurvedic preparations, including bhasmas, involve reactions involving nanoparticles. But instead of limiting himself to a yes/no answer, Sekhsaria argues that validation is necessary but a dialog as equals is more important to facilitate further research – that, by extension, the introduction of radical new technologies brings with it radical new opportunities to improve the way we organise and conduct research.

The third case study highlights how an innovation perceived to be locally useful – to provide good quality drinking water at the household level using nanosilver-coated candles – failed in the market. Researchers at the International Advanced Research Centre for Powder Metallurgy and New Materials (ARCI), Hyderabad, had developed these devices, essentially ceramic candles coated with nanoparticles of silver that could filter out some bacterial species from water.

But for the fact that they were simple to use, required less maintenance and were locally produced, they flopped at the market because they rested on the product’s uniqueness instead of adjusting for consumer behaviour and aspirations. The ceramic candle platform itself was becoming obsolete as a water purification technology, and newer entrants, ranging from advanced filters to ultraviolet and reverse-osmosis systems, all of which trapped more than bacteria, heightened buyers’ expectations.

Nonetheless, the candles were still useful, especially in low-cost settings. So Sekhsaria contends that such products shouldn’t have been left at the mercy of market forces and that the government should have stepped in with subsidies. In fact, he challenges the idea that nanosilver-coated candles are obsolete per se, and argues that obsolescence is linked to infinite demands and consumption and that ARCI might have had more success if it had involved end-users during the product development process. According to him, there is also scope to recalibrate, renegotiate and revive the product, especially if we’re willing to learn from our mistakes.

The fourth case study is on treating retinoblastoma in female children. While nanotechnology is expected to offer better solutions – like using gold-based nanoparticles to destroy cancer cells in a photothermal process – the grim reality is that in some cases, parents prefer not to treat the child and let her die. This is because when children afflicted with retinoblastoma are not treated on time, they may lose eyesight and sometimes even their lives. In this regard, Sekhsaria spotlights how clinicians often talk to these children’s parents as if they are activists, and attempt to educate parents.

There is hardly any categorised data on retinoblastoma in India and how different sections of society have responded to it. It is true that technology is no panacea and the social complexities have to be taken into account – but the complexity can’t be reduced to that of only discrimination.

Sekhsaria discusses how girls and women are discriminated against, and how some parents choose to ignore new technologies that offer better treatment in favour of letting them die. However, his foundation is almost entirely anecdotal, based on  discussions he had in two institutions in Hyderabad and Chennai. His analysis would have been enriched by including examples from more institutions, even if only in these cities, and could have fortified Sekhsaria’s arguments.

As such, the reader is unable to generalise from his examples as to the fraction of parents in the country who decide thus and why, nor whether the parents of male children behave the same way. Moreover, Sekhsaria discusses only those cases where parents didn’t treat the child even if they had the option to do so, or accessed treatment when the retinoblastoma had entered the later stages.

Instead, the discussion could have covered the class and access to treatment dimensions. Unless we know how different sections of society respond to all the options available to them, the book’s view remains one-dimensional and unable to help us understand the technology-society interface. Nanotechnological solutions are not yet in vogue and are years away from widespread adoption. And even if nanotechnology has to have a positive impact, its success depends on the solutions’ affordability, accessibility and the decisions of parents who need to decide what is best for their children and themselves.

In fact, overall, Nanoscale often doesn’t go far enough to flesh out the stories it uses to make its point about the unique prevalence of nanotechnologies – across four very different slices of society, as if the book is attempting to anticipate the nano’s outsized impact on society, and even social relations, in future.

Currently, India publishes the third-highest number of research papers on nanotechnology in the world. Nanotechnologies themselves have applications in sectors ranging from agriculture to textiles, from medicine to construction materials. For example, nano-fertilisers can help increase the efficiency with which plants use nutrients in the soil and help reduce nutrient run-off. Researchers have also used precepts of nanotechnology to improve hydrogen-based renewable energy technologies.

Also read: Why India Needs Nanotechnology Regulation Before it is Too Late

In this regard, Nanoscale provides a new perspective on nanotechnology in India and asks important questions about the corresponding science, technology and policies of innovation. Sekhsaria also successfully subverts conventional wisdom on innovation and attempts to link jugaad with sophistication, calls for dialog between modern science and traditional medicine, and highlights how the market can destroy innovations even as it patronises more expensive technology.

As such, Sekhsaria’s reluctance to pronounce verdicts works to the book’s advantage because, by highlighting the gap between traditional ideas of innovation in laboratories and the ground reality, he is able to contend that we can utilise nanotechnologies to a fuller extent by applying them to areas where there is a contest of paradigms or worldviews.

Krishna Ravi Srinivas works at Research and Information Systems for Developing Countries, a policy research think-tank. The views expressed here are the author’s own.