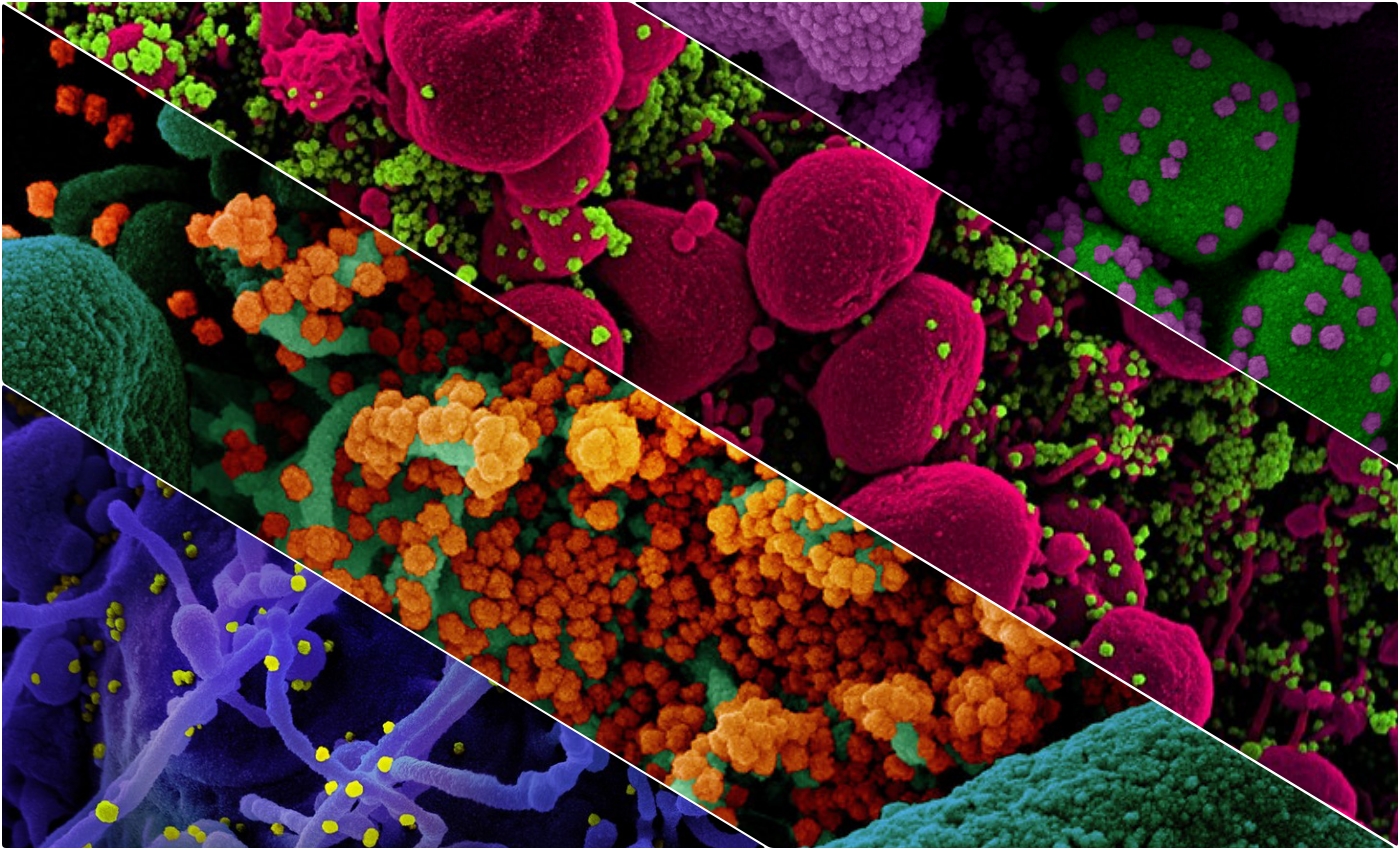 Biocon Secures Approval to Use Drug on Coronavirus Patients

SEM images of the novel coronavirus, shown from left to right in yellow, orange, green and purple. Photo: NIAID/Flickr, CC BY 2.0.

A stony grey ball with red tufted spikes has come to symbolise the novel coronavirus, which causes COVID-19. The arresting representation has given this virus a menacingly alien identity. Developed by medical illustrators Alissa Eckert and Dan Higgins with their team at the US Centres for Disease Control and Prevention (CDC), the image was intended for use with public health messages.

It was released on January 13, immediately after WHO confirmed the pandemic, and is available free from the CDC Public Health Image Library.

The ‘spiky blob’ swiftly became the global icon for SARS-CoV-2. In India, it appears everywhere as the pandemic’s ‘logo’ — on television and in the press, doodled by school children, even painted on barriers that mark off containment areas. It has even been turned into a head-dress by innovative police to enforce regulations! Many now believe that this is actually what the virus looks like. But of course, it is not an exact reproduction.

Viruses are infinitesimally tiny parasitic particles. With diameters one-thousand-times less than the width of a human hair, they are invisible under an ordinary light microscope. More powerful scanning electron microscopes (SEM) show the surface composition of the entire particle outside the host cells. Transmission electron microscopes (TEM) are required to view the inner structure. Other sophisticated techniques, such as cryo-electron microscopy (CEM), are necessary to reveal certain structural details.

Under the microscope, viruses appear like dull grey blobs, roughly spherical or ellipsoidal. A virus consists of genes (RNA or DNA) enclosed in a protein coat that could contain different protein molecules. Some viruses like SARS-CoV-2 are also surrounded by a lipid envelope.

The CDC symbol is based on SEM images of the virus’s surface. Scattered among the bright red spikes are several orange dots and a few yellow ones – all different proteins. This structure is characteristic of coronaviruses. The rough texture, the larger number of spikes, the colours and shadows (a physical impossibility!) are artistic contributions.

The CDC’s illustrators Eckert and Higgins have collaborated for many years on other viruses, including H1N1, Ebola and Zika. Eckert has said they ‘knew how to divide and conquer’. The intention was to produce a serious tone that would ‘grab the public’s attention’. They worked with scientists to understand the virus and drew upon the repository of protein structures at the RCSB Protein Data Bank. They decided to depict a single virus (in illustrators’ jargon, oddly called a ‘beauty shot’), and tried out colours and effects with a computer programme called Autodesk 3ds Max, widely used in game-design.

Set against a dark background, the spiked sphere evokes images of invaders from space. The sphere itself seems to be a weapon, embodying a stealthy enemy that has to be repulsed – uncannily appropriate for the political-military narrative that has emerged around COVID-19. Valiant foot soldiers fight the unseen enemy on many and varied frontlines, directed by experts plotting strategies in dedicated ‘war rooms’.

Soon after the CDC symbol was released, on February 13, the US National Institute of Allergy and Infectious Diseases (NIAID) released a set of SEM and TEM images of SARS-CoV-2. These scientific images too are freely available but have not drawn much public attention.

The digitally enhanced NIAID images are fuzzy: the first image in the album shows yellow globular and elliptical blobs of SARS-CoV-2, isolated from a COVID-19 patient, and “emerging from the surface of cells (blue/pink) cultured in the lab”.

In late January, molecular biologist David S. Goodsell, at the Scripps Research Institute’s Centre for Molecular Structural Biology (CMSB), shared on Twitter an intricate black-and-white rendering of the virus’s cross-section. This was a work-in-progress, based on the structurally similar SARS-CoV about which there was more information from several studies since the 2003 SARS epidemic. It depicted the characteristic corona of spikes, the spike ‘tails’ inside the virus and the surrounding human tissue.

Goodsell, who is also an extraordinarily creative and skilful artist, is reputed for his low-tech watercolour paintings of microbes. His image of the coronavirus is stylised and many-hued – lavender for the RNA strands inside the virus, pink for the spikes, green (mucous) and yellow (antibodies) for the human tissue. It is surprisingly pretty. (I mentioned this to someone who works on viruses, who responded, “All viruses are pretty”!).

The painting was featured in the Washington Post and noticed across the world, from Forbes to the Indian lifestyle magazine Architectural Digest. It is free to use but did not capture the public imagination. Is this because, like most of Goodsell’s other biological artwork, this image seems to be saying that the virus, deadly though it may be, is just a part of nature? Indeed, it evokes wonder rather than fear.

It is not surprising that the CDC image rather than the Goodsell painting has come to symbolise the pandemic. The stories we tell ourselves shape our icons, which in turn reinforce our stories.

In a paper entitled ‘Art and Science of the Cellular Mesoscale’, Goodsell, Arthur Olson and Stefano Forli discussed the challenges of integrating experimental information from microscopy, structural biology and bioinformatics to build detailed models of cells with their “many closely packed and heterogeneous components”.

(In cell biology, the mesoscale is larger than a molecule, smaller than a cell and would include viruses and their interactions.)

Computational visualisation of these systems requires both artistic and quantitative approaches and tools, which are only now being developed, such as the CMSB’s open source software CellPACK.

Recently, medical illustrator Veronica Falconieri Hays described how she built a 3D image of SARS-CoV-2 for the July 2020 issue of Scientific American. She said the “model is not perfect”, that as scientists learn more about the virus, “no doubt parts of it may need to be updated”. She drew upon the computational simulations of biochemists Lorenzo Casalino, Zied Gaieb and Rommie Amaro of the University of California, San Diego, and incorporated all the known scientific details (including from CEM studies) – for instance, that the spikes aren’t clustered so closely and that they’re not all of the same size.

However, she also had to creatively fill in details that are hazy or still unknown. Hays said a “key difference” between her model and earlier visualisations is that she chose to depict the stem of the spike, which scientists know exists but haven’t yet viewed in 3D.

It’s interesting that so many remarkable images for the coronavirus are from US labs and institutions. Could one reason for this be their broad-based education, encompassing a range of disciplines and the close interactions of multidisciplinary professional groups?

In India, a team of scientists at the National Institute of Virology, Pune, have published a study based on TEM imaging of SARS CoV-2. But there seems to be no attempt to develop and share such images more widely. Why are our scientists so disinterested in the aesthetics of what they uncover and with communicating this to the people?